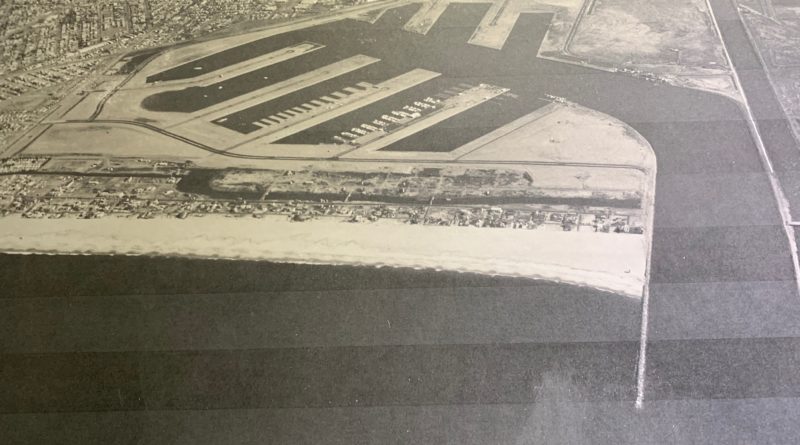 An area once contemplated to be home to the L.A. Harbor eventually became a major destination for recreational boaters.

MARINA DEL REY¾Records are meant to be broken, and it was only a matter of time before Marina del Rey Harbor would lose the title of world’s largest man-made harbor. The harbor and its seven basins were conceived in the 1950s and realized in the early 1960s. Basin B welcomed the first boaters in 1962, and Marina del Rey became official in April 1965. Dubai Marina, which was completed in 2003, has since challenged Marina del Rey for world’s largest man-made harbor – but the Los Angeles County enclave, regardless of its competition in the United Arab Emirates, is still a major draw for boaters, anglers and other users of the water.

Marina del Rey’s history actually dates as far back as 1887, about 75 years before the first boat entered the harbor. Of course, in 1887, there wasn’t a harbor in the area we now know as Marina del Rey. Back then it was Playa del Rey and, later, a marshland.

Real estate speculator Moye L. Wicks hoped to convert the oceanfront land at Playa del Rey into a major commercial harbor, supporting the import and export of goods by Atchison, Topeka and Santa Fe Railway. The vision, however, died a few years later, when Wicks’s company, Port Ballona Development Co., went bankrupt. The wharf built by Port Ballona Development was also destroyed by flooding and heavy rains. Playa del Rey’s place as the commercial port hub of Los Angeles was no more – and the land reverted to its marshland ways.

The idea of building a harbor where Marina del Rey was ultimately built suffered another major blow in 1916, when the U.S. Army Corps of Engineers, according to the enclave’s historical society, “deemed the Ballona area impractical for a harbor.” But things took a turn in 1936, when Congress and the Los Angeles County Board of Supervisors revisited the idea of a man-made harbor south of Venice and north of the LAX area. By 1938 there were discussions to make Marina del Rey, which had lost out to San Pedro to host an international commercial port, home to a recreational boating site.

World War II put those plans on hold for a bit, but the Army Corps of Engineers and Congress revisited plans to establish a recreational boating harbor at Marina del Rey in 1949. The plan called for a marina where 8,000 boats could berth – at a cost of $24 million. Financing from California State tidelands’ oil revenues came four years later. Burton Chace, who was elected to the Los Angeles County Board of Supervisors, lobbied for funding, as well.

Efforts paid off in 1954, when Pres. Dwight D. Eisenhower signed Public Law 780. The signing opened the door for a new harbor to be built at Marina del Rey. Voters approved a $13 million municipal revenue bond in 1956, allowing officials to raise enough money to build the proper infrastructure for a mega-harbor. A groundbreaking occurred in December 1957. Jetties at what is now known as the harbor entrance were completed in November 1958. The 804-acre harbor took its final shape in 1962.

The honeymoon didn’t last long, however, as the winter of 1962-63 hit the new harbor hard. A strong storm surge destroyed slips and pilings, causing remaining work on the harbor to be put on hold. Some used the incident to put down Chace, calling the Marina del Rey project as “Chace’s Folly” or “Chace’s White Elephant.”

Things would work out, though. Funding for a breakwater near the harbor’s entrance became available in 1963. The breakwater, completed in 1965, was built out of rocks from a quarry on Catalina Island. Private developers built hotels, marine businesses, nightclubs, residences, restaurants and yacht clubs around the waterfront. Some of Marina del Rey’s popular destinations were Pieces of Eight restaurant, a Sheraton Hotel (now Marina del Rey Inn), Warehouse restaurant, Lobster House and Don the Beachcomber. Fisherman’s Village, which resembles a New England fishing village, was built in 1969.

The harbor today has 4,100-some boat slips and 22 marinas and anchorages. A boat launch ramp exists on the east side of the harbor, which, the Marina del Rey Historical Society estimates, provides access to about 100,000 boaters. Marina del Rey is also home to regattas, fishing tournaments and boating events, among other happenings.

Major changes are afoot in Marina del Rey, with an influx of new condominium complexes coming (or already arrived) – meaning an area once built for recreational boaters will have thousands of people who might never have their own craft in the water. Yet the enclaves’ origins will always have a maritime theme, regardless of what happens in the future.