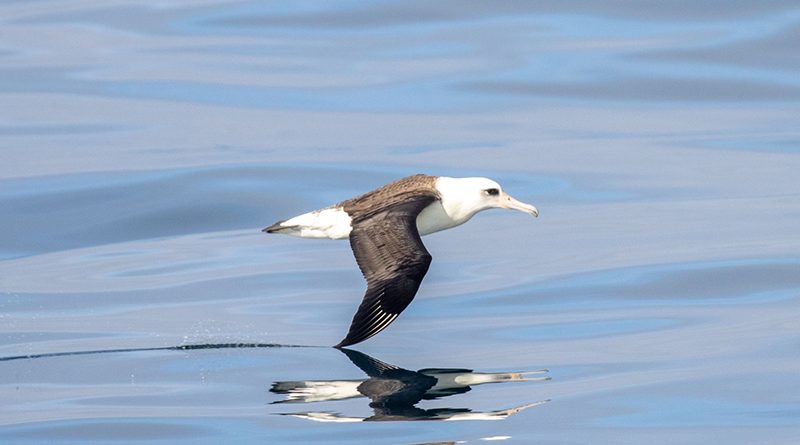 Frigate birds were also sighted out in Newport, a species native to Mexico seeing them this far north is a cool sight. Image courtesy of Davey’s Locker Whale Watching

A pelagic migratory species, the Laysan albatross is mostly found in the North Pacific, making the sighting in Orange County pretty spectacular.

NEWPORT BEACH— A morning whale watching group out of Davey’s Locker and Newport Landing Whale Watching were witnesses to a rare sight in Orange County, a Laysan albatross.

Almost two months after World Albatross Day called for more protection and responsibility towards the sea bird, Orange County whale watchers were reminded of the beauty and wonder this ocean giant offers our ecosystem.

The migratory species spend the majority of their lives in between breeding seasons, from July to October, on the Pacific Ocean, traversing between tropical waters near Hawaii up to the southern Bering Sea, looking for its target species, anchovies, squid, and sardines.

The birds are rarely seen in Orange County, especially close to shore, where their food source is lacking. The 7:30 a.m. group was in the right place at the right time when they spotted the bird just six miles out of Newport Harbor in the company of other sea birds like the masked booby who usually makes its home in Mexico.

“It is not unheard of to see them this far south,” said Jessica Roame, education manager for Davey’s Locker and Newport Landing Whale Watching. “But it is rare because most of their food source…You will find in the Hawaiian Islands, Aleutian Islands, Alaska; things like that area you will see albatross more frequently because there is so much more food up there.”

These birds will spend about 90 percent of their time riding ocean winds on their impressive wing spans which allow them to travel great distances without so much as a flap, according to the Bird Life International website.

“They have that really beautiful large six-foot wingspan,” said Roame. “They hardly flap at all when they are in the wind. So, you just see them soaring.”

Aside from wingspan and soaring patterns, the species can also be identified by their stark coloration. They have an entirely white underside that stretches across their wingspan and dark gray-brown markings across the top of their wings paired with an eyeliner-like marking around their eyes. These features set these birds apart from local marine life.

Laysan albatross mate for life and return to the same nesting areas each year to lay their eggs. The oldest recorded wild Laysan albatross is a 70-year-old bird named Wisdom who nests in a colony found on the Midway Atoll. Wisdom and her partner have hatched over 40 chicks in their colony, according to BLI.

Most albatross nest on open, sandy, or grassy inlands, and most of the species are found in the Hawaiian Island chain, in places like Lehua Island.

A small island off of Kaua’i’s west shore is undergoing a restoration effort to rid the island of invasive predator species, restore natural plant life, and attract sea birds back to their natural nesting grounds.

In April of this year, the island was declared predator free after efforts were made to eradicate an invasive rat species.

The Layson albatross was listed as a near-threatened species in 2018 and is currently considered a stable species with 1,600,000 mature individuals in the wild, according to The IUCN Red List of Threatened Species.

With 15 of the 22 species of the bird considered globally threatened, the push for more conservation and protection of the species is imperative so we can continue these rare sightings.

The best way to connect with marine life is to get out and see it. Roame believes there are more sightings on the horizons, not just for albatross but other migratory species.

“We are getting some interesting mix of tropical birds like booby birds and then the frigate bird that was just sighted with more impending warm water coming through,” said Roame. “I’ve heard tuna have been sighted offshore between here and Catalina, so things are starting to change a little bit. So, when we see birds like this, this is a good indicator that more tropic birds, more cooler birds, could be here on the horizon.”