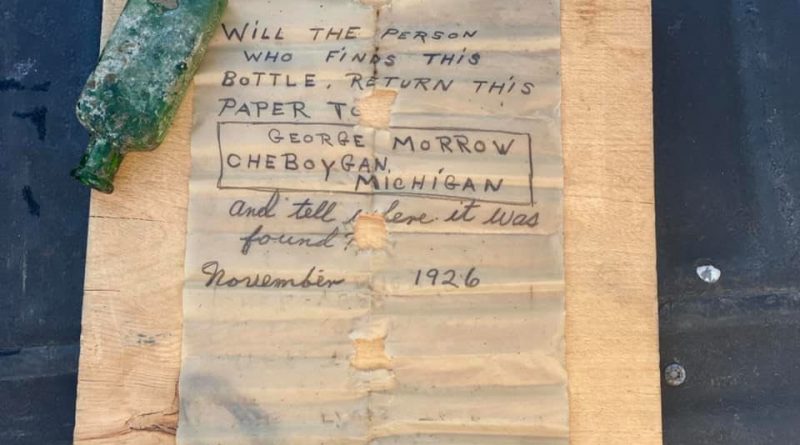 Boat captain Jennifer Dowker finds a message in a bottle in the Cheboygan River in Michigan. These photos went viral online and one commenter was able to track down the writer’s daughter. Nautical North Family Adventures Facebook photo

Cheboygan River, MI一 A message in a bottle tossed into Michigan’s Cheboygan River in 1926 has resurfaced, and thanks to some invested members of the public, the message has brought back a lot of good memories for the writer’s daughter.

Jennifer Dowker, who is a boat captain and owner of Nautical North Family Adventures, runs shipwreck tours all summer long in Michigan’s waterways and was scuba diving to clean the windows on the bottom of her glass-bottomed boat, the Yankee Sunshine, on a June day when a small green bottle caught her eye.

She picked up the bottle and when she got back on board, she noticed a note inside and was able to fish it out and gently unroll it to read the message. The note was dated November 1926 and read:

“Will the person who finds this bottle return this paper to George Morrow Cheboygan, Michigan, and tell where it was found?”

She posted pictures of the find and the message on the Nautical North Family Adventures Facebook page asking if any Morrows know a George Morrow that would’ve written this circa 1926.

She woke up the next day to find her post had gone viral. It has now been shared more than 100,000 times and has more than 6,000 comments from people offering tips, or who just wanted to know more about the story.

One of the commenters was René Szatkowski who wrote, “I FOUND THE DAUGHTER!!!! They do not have Facebook … she is ecstatic!”

According to various news outlets, Dowker was connected to Morrow’s daughter, Michele Primeau, who said her dad’s birthday was in November and he would have been 17 or 18 when he wrote the note and threw the bottle in the river.

Primeau told news outlets her dad died in 1995 and the discovery has brought back a lot of good memories. Primeau told USA TODAY her dad would do sentimental things like that.

“I remember when we were changing the medicine cabinet in our bathroom and we found a message that my dad had written on the wall,” Primeau told USA TODAY.