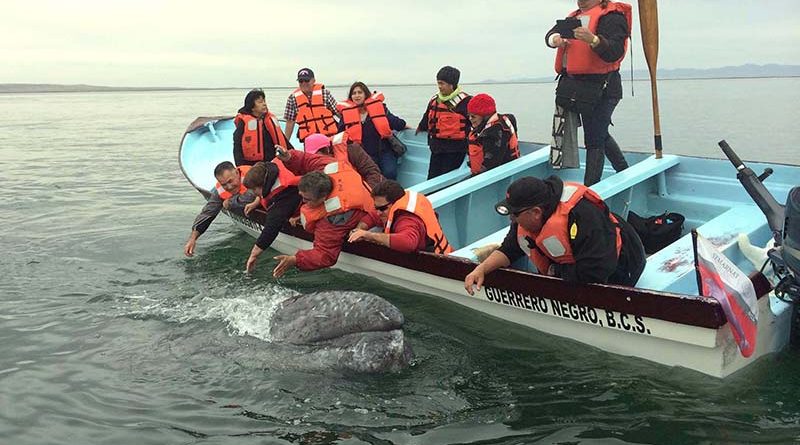 Last time, we cruised down the Baja coast from Ensenada to Turtle Bay, noting a few landmarks, navigational hazards to avoid and six anchorages to keep in mind for different wind and sea conditions.

This time we’ll depart Turtle Bay and continue down Baja to Magdalena Bay.

This next stretch is wide open to wind and seas coming up from the south, so if we have a favorable weather window for voyaging south, we depart Turtle Bay by keeping Roca Entrada to port and heading southwest until we’re about five nautical miles offshore. There we turn southeast and continue coasting five miles offshore for about 30 miles.

Now, if we want to get directly to Mag Bay, we could (a.) lay a straight course (about 144° for 255 nautical miles) from the San Pablo waypoint to a safe point five nautical miles west of the lighted Cabo San Lazaro headland at the northwest corner of Mag Bay’s outer island. That course would put us over some of this region’s most excellent fishing at the Uncle Sam Banks in about 130 miles. Maybe catch some lunch and dinner? Then 85 miles onward toward Cabo San Lazaro.

Or we could (b.) stay coastal a while longer and check out a couple places of interest. Both Bahia Asuncion and Bahia Abreojos provide anchoring shelter from this region’s prevailing northwest winds and so much more.

But for a more commodious stopover, we would anchor almost anywhere off the prosperous little fishing village of Bahia Asuncion, which spreads a mile along the east side of Punta Asuncion. Remnants of the old cannery pier are still visible in the middle of town, and since a normally good dinghy landing beach spot is about 300 yards north of that pier, we could anchor off there. Most pangas anchor off their beach launch ramps at the south end of the village.

A paved road now brings Pemex diesel and gasoline. To get panga to deliver fuel, ice, water, or food to your boat at anchor, hail Campo Sirena on VHF 16. Naturalist guide Sheri Bondi and her daughter Sirena and their families run this service for visiting boaters, as well as a restaurant and beach campground. Asuncion often has better cell coverage than Turtle Bay.

About 45 nautical miles southeast from Asuncion we have bypassed Hipolito and La Bocana to anchor off the east side of low, broad Punta Abreojos. We approach the east side anchorages from five miles out, because Abreojos translates as a warning, “Open the Eyes,” referring to eight hazards within the 10-fathom curve or five miles around this low broad point.

In November, thousands of migrating gray whales arrive at Laguna San Ignacio Whale Park to mate and give birth in the lagoon’s warm, shallow waters until March. The whale park is 13 miles east. Private boats cannot enter the whale park, so anchor off Abreojos and book half-day seats aboard one of the park-guide pangas. Some whale mothers train their babies to come alongside the pangas for a pat on the head from the blissed-out humans. (See photo)

From Abreojos, we can jump offshore and head 130 miles south-southeast.

Although Santa Maria Bay is technically not inside Magdalena Bay proper, it indents hugely (three by six miles) into its barrier islands, Isla Magdalena. Santa Maria Bay’s easy entrance and huge northwest shelter make it one of the most popular anchorages on Baja’s rugged Pacific coast. Although it’s mostly undeveloped, everyone stops here, from the Baja Ha Ha sailors and CUBAR power boats to long-range fishing boats and big-dollar tournament winners.

Most remarkable are the narrow band of sand dunes lining this bay’s eastern boundary. Over the top you can see right into Mag Bay’s commercial channel, sometimes spotting shrimpers and a 100-foot supply ship approaching Puerto San Carlos and its commercial piers inside Mag Bay proper.

(1.) Lies three miles inside. We can anchor on either side of this triangular spit of land covered by stinky fish-drying racks and the remnants of a phosphorous loading dock. However, this point was originally used as a whaling station.

And its tiny town Puerto Magdalena are 11 miles up from Punta Entrada. Watch out for floating fish hatchery pens. The anchorage has room for 50 boats to swing, protected in all but strong east wind.

Ashore are two part-time restaurants (Miramar & La Palapa) and a mini mart, remarkable considering this is an island and everything must be brought over by panga from Puerto San Carlos. The port captain’s annex oversees things, so after you get settled, you might call them on VHF 16 to notify them you cleared into Mexico in Ensenada and are now here for a few days. The Mexican Navy has a base here and down in the south end of Mag Bay. School children here really appreciate little gifts of notebooks, pens, crayons, and back packs.

Is located 21 miles up from Punta Entrada, including a well-marked N-shaped channel that starts near Man of War Cove. It’s a commercial port that serves shrimpers and container ships, so the port captain wants yachts to anchor north of the piers and come ashore to do the complete port clearance cha-cha.

Ashore we find three cute mom-n-pop hotels with restaurants that cater to trailered fishing boaters, also a Pemex station, several grocery stores and a bus station selling tickets to La Paz and Loreto. Big yachts in a pinch have rendered themselves well and taken high-speed diesel here, but it’s not recommended for smaller boats.

Next time we’ll find out way down to Los Cabos and have a look around.