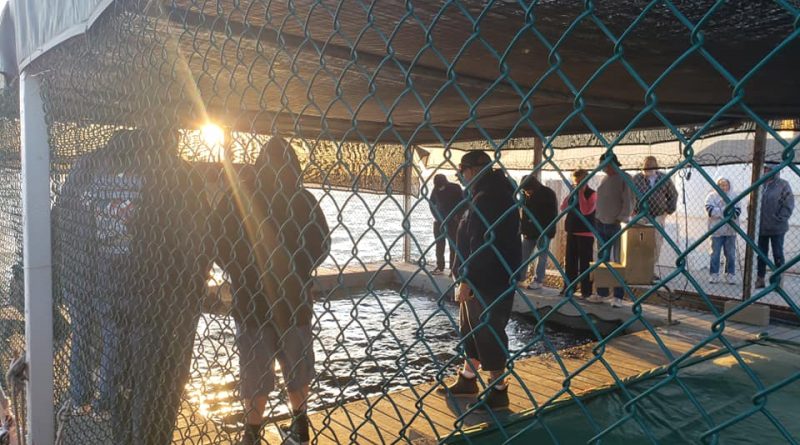 A group of volunteers have released hatchery-raised white sea bass annually since 1992 in Channel Islands Harbor.

OXNARD— On May 21, just under 10,000 white sea bass were released from a set of volunteer-run grow-out pens in Channel Islands Harbor. The grow-out facility received the juvenile white sea bass from a hatchery in Carlsbad in December 2020 and volunteers spent the following months maintaining the pens and feeding the fish prior to their May release.

The grow-out facility in Channel Islands Harbor, sponsored by the Channel Islands Yacht Club Anglers, has been operating since 1992 and is one of 13 white sea bass grow-out facilities operating in Southern California as part of the Ocean Resources Enhancement and Hatchery Program (OREHP). The program was started by the California Department of Fish and Wildlife in 1983 to research the effectiveness of raising white sea bass in captivity and releasing them as a way to enhance the population, which was facing dwindling numbers. According to the CDFW, in 1978, fewer than 300 white sea bass were caught by recreational anglers.

“Back in the 80s and 90s white sea bass were greatly impacted,” said Frank Sullivan, a volunteer pen operator in Channel Islands Harbor.

Sullivan said he believes the program has contributed to the rebound of the species.

According to numbers from the California Recreational Fisheries Survey, 5,981 white sea bass were caught by recreational anglers between Sept. 1, 2018, and Aug. 31, 2019, representing a 23 percent increase from the previous season.

Stocks are not currently overfished but are monitored by the CDFW through the White Seabass Fishery Management Plan.

“It’s just an opportunity for us in recreational fishing to give back,” said Sullivan.

Most of the grow-out facilities release their white sea bass in April or May.

The white sea bass are spawned and reared at the hatchery at HSWRI and then trucked to various grow-out pens when they hit about 4 inches. The fish are held at the grow-out facilities until they are ready for release, typically at around 8 to 10 inches in length.

Each fish is tagged internally in the cheek with a small, stainless steel coded wire tag. The tag allows the OREHP to identify hatchery-reared fish from wild individuals and can only be located by a specialized detection device. Some of the information obtained from tagged individuals includes their movement, diet, growth, and most importantly, survival rate.

Recreational anglers are encouraged to save and freeze the heads of any legal adult white sea bass caught with the stones/ear bines intact. The frozen heads can then be dropped off at one of the designated drop-off locations. Heads should be bagged and labeled with your name, phone number, date, and location of capture. A list of locations can be found at https://bit.ly/3wGdg0C.

The recreational fishery for white seabass remains open year-round. The daily bag and possession limit is three fish except only one fish may be taken in waters south of Point Conception between March 15 and June 15. The minimum size limit is 28 inches total length or 20 inches alternate length.