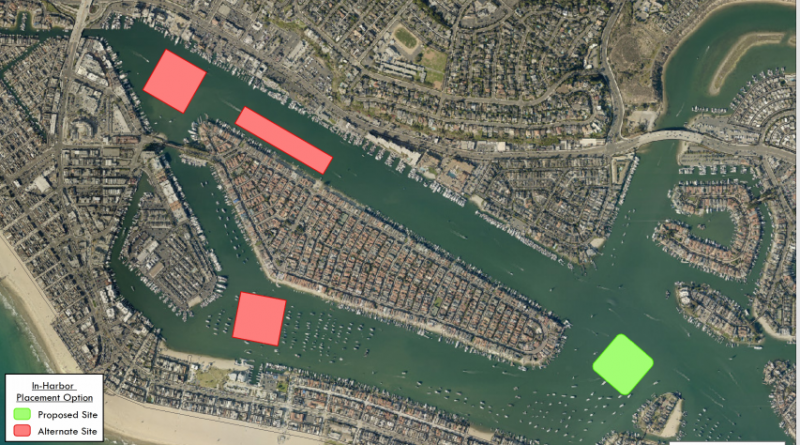 NEWPORT BEACH— In a rare effort from the private sector to collaborate with the city, a Lido Isle resident has stepped up to privately fund a conceptual plan to get rid of material planned to be dredged from Newport Beach Harbor that contains elevated concentrations of polychlorinated biphenyls (PCBs) and mercury.

The city of Newport Beach needs to find a way to dispose of the material in order to dredge the harbor and has been moving forward with plans to construct a confined aquatic disposal facility (CAD) in the lower bay between Bay Island, Harbor Island, and Lido Isle, which involves cap-
ping the contaminated dredged material inside a deep hole.

Lido Isle resident Palmer Luckey, an entrepreneur and founder of Oculus VR and designer of the Oculus Rift, lives in front of the proposed CAD location and is spearheading and funding an effort to investigate alternatives that lower the cost, protect the environment, and pro-
vide communal benefit.

“I’m very interested in helping with this, I talked at the Harbor Commission
meeting about that, I think there’s ways we can do this better, think there’s ways we can do it cheaper,” said Luckey at the May 25 City Council meeting.
Ideas being explored include using the unsuitable material for a bike path,
park, or even at Lower Castaways Park, a 4-acre undeveloped waterfront site the city has been contemplating plans for since at least 2013.

“Instead of digging a big hole in the middle of Newport Bay, we’re looking at is there ways to make a park where we can encapsulate this stuff for a shoreline park of some sort, can we make a bike path out of this,” said Brent Mardian, senior marine scientist at Pi Environmental.

Mardian is part of what he called “Team Palmer”, a group of experts and
area homeowners working with Luckey on the project.

A Harbor Commission ad-hoc committee is also working with Luckey and his team on these alternatives in parallel with moving forward in the process for the CAD.

Mardian said Team Palmer is aiming to come up with a feasible and cost-effective alternative that they hope the city will move forward with instead.

“In August, I’m pretty confident we’ll have a pretty good plan that’s better than digging a big hole in the middle of Newport Bay and the city will have an offramp available to them,” said Mardian.

The CAD is part of a dredging project to remove approximately 1.2 million cubic yards of sediment within the Main Channel and channel offshoots to re-establish authorized navigation depths. It would serve as a disposal location for approximately 106,900 cubic yards of dredged material deemed unsuitable for open ocean disposal due to elevated concentrations of polychlorinated biphenyls (PCBs) and mercury.

The CAD would be constructed underwater by digging a hole and placing the non-open ocean quality bottom sediment inside. A minimum three-foot cap of suitable material would then be placed on top, creating a physical barrier between any contaminants and the overly-
ing water column.

City staff said they, along with their dredging consultant, looked at all potential options, including placing the material at the local ports of Los Angeles and Long Beach for fill, and trucking the material to a landfill, and found the most currently feasible and cost-effective option to dispose of this material is to construct a CAD site within the existing har-
bor, according to a May 25 City Council staff report.

“ I believe in my heart of hearts we thought of every conceivable method, ” said City Council Member Marshall “Duffy” Duffield at the May 25 City Council meeting.

Some homeowners in the area, including Palmer, and Orange County Coast-
keeper raised concerns about the proposed CAD and the draft Environmental Impact Report.

Concerns included that the EIR neglected to consider feasible alternatives, that the EIR did not adequately analyze the impacts of biological re-
sources of the bay, and the EIR relied on outdated data and unsupported assumptions for feasibility analyses.

“In the end, I think you know the goal is for a healthy lower Newport Bay, a healthy Newport Bay overall and I think we’ll be able to engineer the sort of design and the conceptual plan that’ll get us there,” said Mardian.

Both the Harbor Commission and City Council have supported the CAD moving forward alongside this private-sector effort in order to make sure the dredging project stays on track.

The City Council at its May 25 meeting voted unanimously to certify the EIR for the proposed CAD, which allows the project to continue moving forward and also voted to require that the privately funded alternative is adequately explored and reviewed by the Harbor Commission.

“If Team Palmer kind of goes all the way to the finish line on this thing, what they’re going to do, or what Palmer’s going to do is essentially pay for this alternative analysis and try to hand the city a shovel ready, permitted project that they could fund,” said Mardian.