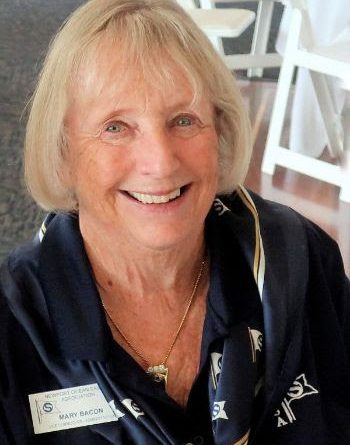 Bacon is a long-standing member of the Bahai Corinthian Yacht Club and also served as President of the Bahia Sail Racing Association from 2018-2020. Photo Provided by Newport Ocean Sailing Association

Mary Bacon will be the second woman to fill the role of Commodore for the Newport Ocean Sailing Association.

NEWPORT BEACH一 At their annual meeting on July 18, the Newport Ocean Sailing Association instilled the 2022 board of directors, which included the installation of the second woman to ever hold the Commodore title, Mary Bacon.

Bacon has been a valued member of the sailing committee for over 30 years and served as the second female commodore of the Bahia Corinthian Yacht Club in 1999 where she helped the club navigate the purchase of its land and marina.

She received the club’s Woman of the Year award in 1992, 2012, and 2013.  In 2013 she was awarded the Peggy Slater Memorial Award from the Southern California Yachting Association where she served on the board in 2003 and as commodore in 2006.

In a July 20 press release, Bacon said she hopes to capitalize on the momentum created by the 2021 Newport to Ensenada Race, to increase participation, and improve the competition experience.

“We have had a great number of challenges in the past year, but we need to celebrate that we’re on the other side of the pandemic,” Bacon said in the press release. “The challenge now is to maintain enthusiasm into the celebratory 75th year and race. Sailors need to sign up and get raring to go; to bring friends; challenge other racers to get others out on the water; challenge organizers to stay busy, and challenge our yacht clubs to get fleets ready for 2022.”

Bacon’s first act as commodore was to officially announce that the 74th Newport to Ensenada Race will be held on April 22, 2022.