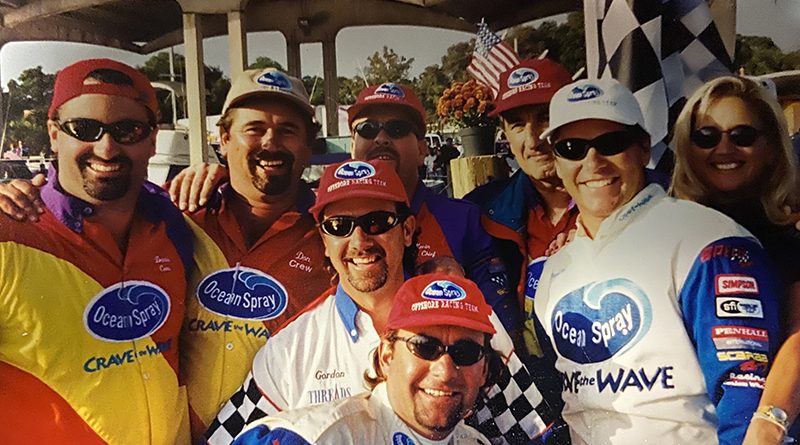 Offshore powerboat racing has been a competitive and dangerous sport in the United States for 111 years. Dennis Sigalas along with teammate and life-long best friend Bruce Penhall dominated the industry in the 90’s, winning five out of the six world championships they competed in.

Dennis Sigalos is a born and raised Southern California native who first got into offshore powerboat racing because of his father, Tony Sigalos, and his life-long best friend Bruce Penhall’s father, Leroy Penhall, who both raced flat-bottom SK runabouts back in the 60s.

Sigalos and Penhall were world champions in speedway motorcycle racing in the 1980s. Ten years after retiring from the track, the two friends revived their competitive impulses and became an offshore powerboat racing team. Their team’s name was Ocean Spray “Crave the Wave.” They raced in A-Class, D-Class, and modified Class in a V-bottom Scarab.

Sigalos and Penhall’s first race boat was a 38-foot Scarab/ Larry Smith design V bottom none step hull. The boat’s design had four seats but was only raced with two crew members. Penhall was the driver, and Sigalos ran the throttle, trim, and monitored all the gauges. The two families (fathers and sons) then built their first boat.

In 1904, offshore speedboat racing was officially recognized as a sport after a race took place from the south-eastern coast of England to Calais, France. Soon after, the American Power Boat Association was formed in the United States, and the first U.S. recorded race took place in 1911 in California.

In modern times these competitions are raced by mega-horsepower catamarans and V-hulls capable of speeds up to 180 mph. However, the teamwork and professionalism of offshore racing make it a class act and a rush for spectators. Typically, a team of one driver and one throttleman wrangle the wind and waves of some of the world’s most challenging racecourses.

Offshore powerboats always have a team of two enclosed in a cockpit for maximum efficiency. The driver’s role is to keep their eyes open for turns on the course, and the throttleman is constantly watching the swell and pulling the throttle back when jumping out of the water. The throttleman slows down for turns and gauges the boat’s water temperature and oil pressure, trimming the bow up or down when the boat is navigated into different water conditions (more smooth or rough water; the conditions typically change constantly throughout the racecourse).

“Wow, what a rush,” said Sigalos. “Both of our families traveling the U.S. was our new sport.”

Sigalos and Penhall won five out of six world championships they raced in, the world speed record, and Rookies of the Year throughout their six-year career as speedboat racers.

From 1997-1999, Sigalos and Penhall raced a 42-foot fountain power boat with a step bottom. The two sat in this boat tandem, with Penhall driving in the front and Sigalos in the back running the throttle again. Their top speed for this boat was 150 mph and 3000 hp. This boat won them three world championships, and a world record in their class called Super V.

“We raced offshore most of the time but did run some big lake races as well,” said Sigalos. “My favorite win and place was our first world championship in 1994 in Key West, Florida, and we were the underdog. The swell was so big and rough; it was what we were looking for. The boat handled it perfectly.”

Sigalos doesn’t race professionally anymore. Instead, his preferred boating style today is a relaxed trip to Catalina or Moonstone on his friend’s 58-foot sonship.