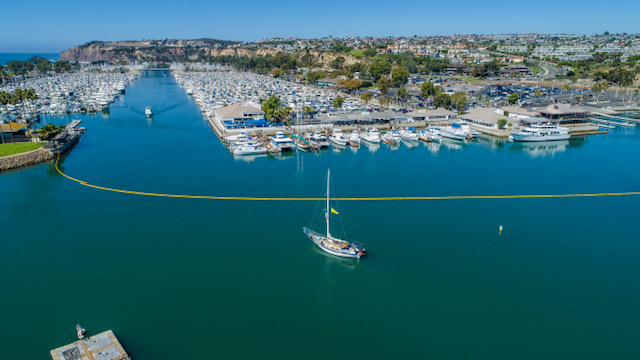 Dana Point Harbor was blocked off using a containment boom, movement out of the harbor was prohibited until Oct. 8. Credit: Photo Provided by Dana Wharf Sportfishing

Harbors and beaches along the coast of Southern California closed after a report about an oil slick off the coast of Newport Beach on Oct. 2.

NEWPORT BEACH一 Harbors are beginning to reopen after closures throughout the southern part of the state due to a 13 square-mile oil slick three miles off the coast of Newport Beach that was reported to the city on Oct. 2.

The city website said that preliminary results from an investigation stated that the leak appears to have originated from a broken pipeline connected to an oil platform owned by Amplify Energy Corporation.

Officials said there was a 13-inch crack in the pipeline that began leaking oil, causing the slick.

The response and investigation have been broken up into two teams with five: state, federal, and local agencies involved in a joint-response effort.

The response effort is leading the charge in terms of cleaning up the oil in the water and as it hits local beaches as well as continuing to monitor the situation with fly-overs.

In an Oct. 7 press conference from the Unified Command, Brian Ferguson with the Governor’s office stated that a separate team from the federal government would be covering the investigation.

Ferguson said that the team was not on the ground, but a public information office would be made available once the team was established.

In the same press conference, Federal On-Scene Coordinator Captain Rebecca Ore with the United States Coast Guard spoke about a lack of a timeline for the cleanup and said that they would continue to monitor the situation and the way the oil continues to be affected by weather conditions and where it moves to.

“The oil that we do have offshore is in the form of streams or ribbons we call it sheen. We are not seeing a lot of heavy product or dark patches of oil,” said Ore. “In terms of oil movement, we are talking about a huge area of the ocean, and that oil movement spreads wide and far and as it is exposed to the elements to the air to the sun, to the wave action, to the tides, to the currents, the behavior of that oil starts to change. Our over-flights are continuously monitoring what that offshore condition looks like and what that offshore oil looks like. We are starting to see trends that indicate fewer and farther between less heavy sheens of oil.”

The Office of Environmental Health Hazard Assessment determined that the fishing in the affected area was a risk to public health; the prohibition on the harvesting of shellfish and fish within six miles of shore will continue until further notice.

The closure extended from Warner Ave. in Huntington Beach to Crown Valley Parkway in Dana Point, including the shorelines, offshore areas up to six miles offshore, and all bays and harbors within the indicated areas.

The latest update for fisheries came on Oct. 7 when the declaration changed the affected area extending the area south to the San Onofre Nuclear Power Plant and north to the west jetty of Anaheim Bay.

Harbors up and down the coast closed after containment booms were placed in front of harbors to protect them from the oil spill.

Newport Harbor reopened following five days of closure. The harbor was protected by two containment booms across the Entrance Channel, which have since been removed.

As of Oct. 11, city beaches in Newport reopened after water quality testing showed the ocean water was safe for swimmers and surfers to return.

The harbor reopened on Oct. 8 at 3 p.m. and beaches in the city were on a soft open, meaning beachgoers could go on the sand but should avoid the water.

As of Oct. 10, at 7:30 a.m. USCG, CDFW, Orange County, and San Diego County reported that more than 1,600 people were involved in conducting response operations; 5,544 total gallons of crude oil have been recovered by vessel; 13.6 barrels of tar balls were recovered; approximately 250,000 pounds of oily debris had been recovered from shorelines; shorelines are undergoing continued clean-up efforts; two overflights are scheduled for Oct. 17; 11,400 feet of containment boom have been deployed.

There are volunteer opportunities available in Newport and other coastal cities affected by the oil spill. Volunteers need to meet a few minimum requirements they must be at least 18-year-old, able to carry up to 25 pounds, and willing to follow COVID-19 procedures. To register for volunteer opportunities, see https://calspillwatch.wildlife.ca.gov/Volunteer.

The Division of Boating and Waterways has released a series of resources for boaters impacted by the oil spill at https://dbw.parks.ca.gov/?page_id=30688.

Southern California Spill Response released a phone number,1-866-985-8366, that community members can call to file a claim if they were impacted by the oil spill. In addition, they remind boaters not to clean their own boats and do not use soaps or dispersants.

For information about affected wildlife or to report wildlife affected by the oil, visit the University of California, Davis Veterinary Medicine website at https://owcn.vetmed.ucdavis.edu/pipeline-p00547-incident.