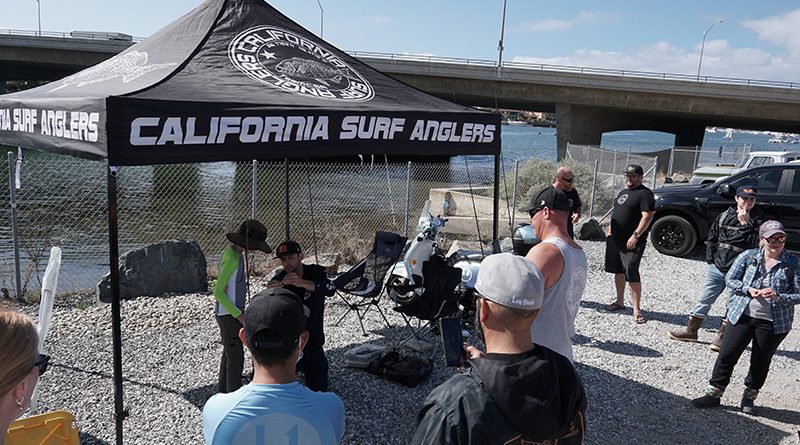 Orange County Coast Keeper and their partners have worked in the bay for the past five years planting eel grass and creating oyster beds.

NEWPORT BEACH⸺ On June 18, the Orange County Coast Keeper hosted Recreation and Restoration in Upper Newport Bay to bring together fishing and science.

The event ran from 9 a.m.-12 p.m. and included fishing lessons from the California Surf Anglers and several talks from experts about sustainable practices and the OC Coast Keeper’s living shore restoration project in Upper Newport Bay, which started five years ago.

“We have been restoring both eelgrass and Olympia oysters in upper Newport Bay with our partners for about five years now,” said Marine Restoration Director for Orange County Coast Keeper Claire Arre. “And we really wanted to bridge this connection between the science and restoration that we are doing, and the people are physically using this space.”

This is the first time the event has been held. The event was inspired by the group’s interactions with anglers on the bay over the years and looks to get people out there to take part in sport fishing but also understand mitigation efforts and the environmental impacts humans have on the coastline.

“My main goal is to get people out there to not only see our work but to really start fishing our coastlines in a sustainable way,” said Arre. “Learn some of the rules that are required and respected in the industry… We are also excited to get people to know about our restoration projects.”

The restoration project, which started five years ago, is based on the concept of a living shoreline. Rather than using hard rock or cement walls to help shoreline restoration, OC Coast Keeper has planted eel grass and oyster beds throughout the bay to mitigate erosion more naturally while providing a natural habitat for the organisms off the coast.

“These living shorelines can act as a sea wall but can be used by animals who still need that space, and we believe that is an important concept, so we were one of the first to pair oysters and eelgrass in this living shoreline concept,” said Arre.

The California Surf Anglers provided fishing lessons throughout the day, which focused on fishing native species and how to fish in areas of eelgrass or oyster beds.

The event also had participation from graduate students from California State University Long Beach and Fullerton who have been working on the project for some time as a part of their studies.

Several education booths were set up with OC Coast Keeper partners, including a speaker from the National Oceanic Atmospheric Administration, SoCal Sea Turtles, and a California Department of Fish and Wildlife representative.

The speakers talked about the work their respective groups have done in the bay, specific information on species in the bay, and how to sustainably fish for those species.

The project has seen success over the years. The eelgrass has spread from a third of an acre which was planted five years ago, to over three acres. The Olympia oysters, a native species, are also seeing a comeback in the Bay through the restoration efforts.