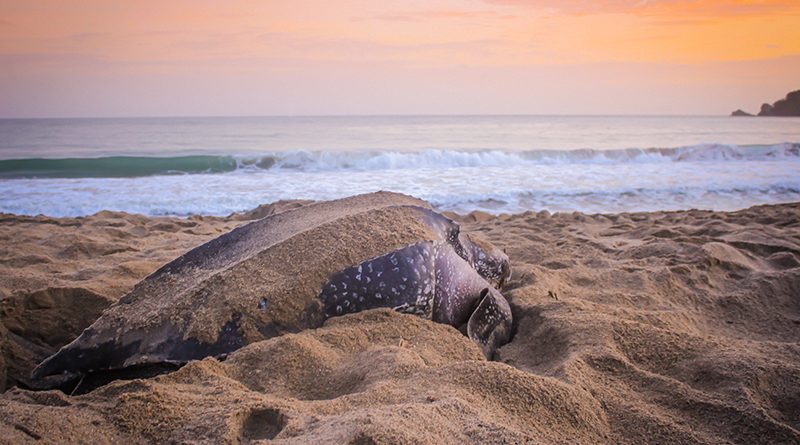 There are seven species of sea turtles that inhabit the ocean, six of which, including the leatherback are protected under the Endangered Species Act. Shutterstock image.

Important changes were made by the California Fish and Game Commission to regulations regarding the Pacific leatherback sea turtle as well as to the grunion spawning season.

CALIFORNIA- On Oct. 15, the California Fish and Game Commission acted on several issues affecting California’s natural resources. Topics discussed included: Emergency regulations that prohibit the use of hydraulic pump gear for the recreational take of clams, sand crab, and shrimp. A two-year emergency extension of regulations adopted in September 2020 to authorize conditional take of western Joshua tree under certain circumstances while protected under the California Endangered Species Act (CESA) as a candidate species. The extensions are for 90 days. The addition of the leatherback sea turtle to the endangered list, new grunion spawning regulations, and more.

The CESA is a California environmental law that conserves and protects plant and animal species at risk of extinction. Originally proposed in 1970, CESA was repealed and replaced by an updated version in 1984 and then amended in 1997.

Approximately 250 species are currently listed under CESA. A CESA-listed species, or any part or product of the plant or animal, may not be imported into the state, exported out of the state, “taken” (killed) possessed, purchased, or sold without proper authorization.

“Leatherback sea turtles have been on the Federal Endangered Species List since 1970,” said CDFW Environmental Program Manager John Ugoretz. “Unfortunately, the population has continued to decline, with as much as a 95 percent drop in the nesting population since 1980.”

Leatherbacks come to California to feed on its rich jellyfish populations, primarily offshore central California in the Monterey Bay area. They do not come ashore here. The numbers of leatherbacks seen off California have declined from a historic average of about 120 to around 50 in recent years leading to the decision to include them on the California endangered species list.

In California, leatherbacks have been killed by ship strikes and entanglement in fishing gear, though recent regulation changes have significantly decreased fishery bycatch.

Leatherback sea turtles face many threats, including habitat loss on nesting beaches in Indonesia, which is exacerbated by climate change, humans taking their eggs (both legal and illegal) on those same beaches, predation by feral dogs and cats, bycatch in high-seas commercial fisheries, and potentially pollution and disease.

By unanimously voting to add the leatherbacks to the California Endangered list, the sea turtles gain added protections that ensure the species will receive the highest possible attention by state agencies and that additional funds may become available to help study and respond to potential threats.

The meeting also addressed the Commission’s unanimous vote to authorize publication of a notice of intent to amend regulations related to recreational take of California grunion with a bag and possession limit of 30 fish, there has been no formal limit before, and a three-month closure from April to June. Holes may not be dug to entrap grunion when trying to capture them.

Grunion are the object of a unique recreational fishery. These fish are famous for their remarkable spawning behavior, which evokes an “I don’t believe it!” response from people seeing or hearing about it for the first time, according to CDFW.

Grunion leave the water at night (typically around midnight and until two am) to spawn on beaches during the spring and summer months. For four consecutive nights, beginning on the nights of the full and new moons, spawning occurs after high tides and continues for several hours.

The action does not go into effect immediately. The Fish and Game Commission must formally adopt the findings at their next regularly scheduled meeting and there is a 30-day notice period before the final implementation of the regulations takes effect. It will be early next year that the process is fully concluded, according to Ugoretz.