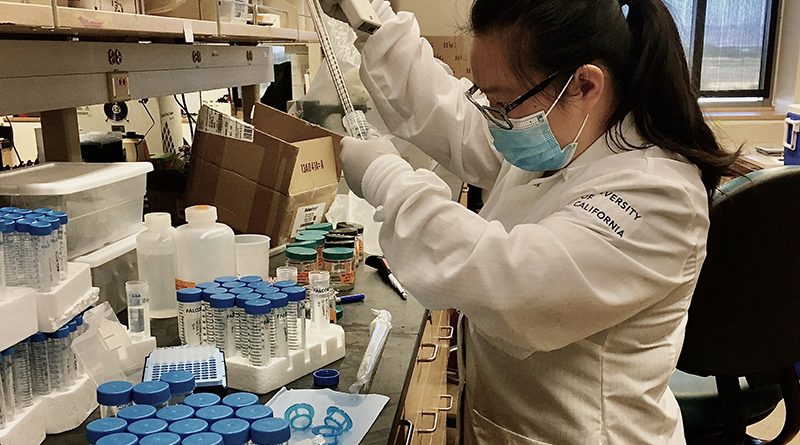 A new study conducted by UC Davis has found microplastics can carry land-based parasites to the ocean, affecting wildlife and human health.

DAVIS— In a study released on April 26 by The University of California, Davis, published in the journal Scientific Reports, the research found microplastics are a pathway for pathogens on land to reach the ocean, with likely consequences for humans and wildlife health.

The study is the first to connect microplastics in the ocean with land-based pathogens. It found microplastics can make it easier for disease-causing pathogens to concentrate in plastic-contaminated areas of the ocean.

Throughout the study, researchers were able to show parasites were concentrating on microbeads and microfibers, by placing parasites and plastics together in seawater, incubating it for several days, and then counting parasites on the plastics and those still suspended in the seawater.

The pathogens studied — Toxoplasma gondii, Cryptosporidium (Crypto), and Giardia — can infect both humans and animals. They are recognized by the World Health Organization as underestimated causes of illness from shellfish consumption and are found throughout the ocean.

“The zoonotic protozoan pathogens that we investigated are widespread and have been previously detected in shellfish in many countries,” said corresponding author Karen Shapiro in the study, an infectious disease expert and associate professor at the UC Davis School of Veterinary Medicine.

Giardia and Crypto mainly cause gastrointestinal diseases such as diarrhea; however, they can prove deadly in very young children and in the immunocompromised (Crypto is more dangerous than Giardia in that sense).

Toxoplasma is an interesting parasite that primarily causes asymptomatic infections in animals and people but can also be deadly.

“We are specifically concerned about pregnant women who become exposed for the first time to Toxo [through ocean water and or consuming infected seafood], where the parasite can infect the developing baby and cause miscarriage, abortions, or lifelong illness, if the baby survives, with a disease called congenital toxoplasmosis,” said Shapiro.

In addition, people with weakened immune systems (for example, those undergoing chemo treatment or those suffering from AIDA) can also develop a deadly systemic illness.

“We are also concerned about Toxo in endangered wildlife,” said Shapiro. “For example, here in California, Toxo kills threatened California sea otters, and the parasite is also a significant cause of death in critically endangered Hawaiian Monk Seals in Hawaii and Maui Dolphins in New Zealand. “

It is essential to note that these experiments were conducted in small bottles in a highly controlled lab environment.

“We have not conducted field studies yet to sample plastics to evaluate the presence of protozoan parasites on their surfaces in the ‘real world,'” said Shapiro. “In that sense, our study was the first step to testing for this association as a preliminary trial showing that the association between parasites and plastics is possible and can be quite significant under the conditions tested. In terms of how they encounter each other in the marine environment, these pollutants [pathogens and plastics] occur in the same water bodies and coastal waters. I suspect that the probability of these two particle types encountering each other depends on many factors, including their respective concentrations, water currents, and turbulence in the system.”

A human and animal problem:

Microplastics are tiny plastic particles smaller than 5 millimeters, no bigger than a grain of rice. They’ve contaminated waters as remote as Antarctica. The study’s findings indicate that by hitchhiking on microplastics, pathogens can disperse throughout the ocean, reaching places a land parasite would typically never be found.

T. gondii, a parasite found only in cat feces, has infected many ocean species with the disease toxoplasmosis. UC Davis and its partners have a long history of research connecting the parasite to sea otter deaths. Unfortunately, it has also killed critically endangered wildlife, including Hector’s dolphins and Hawaiian monk seals. In people, toxoplasmosis can cause life-long illnesses and developmental and reproductive disorders.

Crypto and giardia cause gastrointestinal disease and can be deadly in young children and immunocompromised people.

“This is very much a problem that affects both humans and animals,” said first author Emma Zhang, a fourth-year veterinary student with the UC Davis School of Veterinary Medicine. “It highlights the importance of a One Health approach that requires collaboration across human, wildlife, and environmental disciplines. We all depend on the ocean environment.”

For the purpose of the study, the authors conducted laboratory experiments to test whether the selected pathogens can associate with plastics in seawater. The authors used two different types of microplastics: polyethylene microbeads and polyester microfibers. Microbeads are often found in cosmetics, such as exfoliants and cleansers, while microfibers are in clothing and fishing nets.

The scientists found that more parasites adhered to microfibers than to microbeads, though both types of plastic can carry land pathogens. The wispy particles of microfibers are common in California’s waters and have been found in shellfish.

A pathway for pathogens:

The authors say plastic makes it easier for pathogens to reach sea life in several ways, depending on whether the plastic particles sink or float.

Microplastics that float along the surface can travel long distances, spreading pathogens far from their sources on land. Likewise, plastics that sink may concentrate pathogens in the benthos environment, near the bottom of the sea. That’s where filter-feeding animals like zooplankton, clams, mussels, oysters, abalone, and other shellfish live, increasing their possibility of ingesting both plastic and pathogens.

“When plastics are thrown in, it fools invertebrates,” Shapiro said. “We’re altering natural food webs by introducing this human-made material that can also introduce deadly parasites.”

Co-author Chelsea Rochman, a plastic-pollution expert and assistant professor of ecology at the University of Toronto, said in the study there are several ways humans can help reduce the impacts of microplastics in the ocean. She notes that microfibers are commonly shed in washing machines and can reach waterways via wastewater systems.

“This work demonstrates the importance of preventing sources of microplastics to our oceans,” said Rochman. “Mitigation strategies include filters on washing machines, filters on dryers, Bioretention cells or other technologies to treat stormwater, and best management practices to prevent microplastic release from plastic industries and construction sites.”

“There is no one solution; rather, we really need an integrated approach that shapes policy and human decision making to help reduce our dependence on plastic products and their eventual pollution in aquatic systems,” said Shapiro.

Additional co-authors include Minji Kim, Lezlie Rueda, James Moore of UC Davis, and Elizabeth VanWormer of the University of Nebraska.

The study, which can be found on the Science Daily website, was funded by the Ocean Protection Council and California Sea Grant program, with student financial support provided by the UC Davis School of Veterinary Medicine Students Training in Advanced Research (STAR) program.