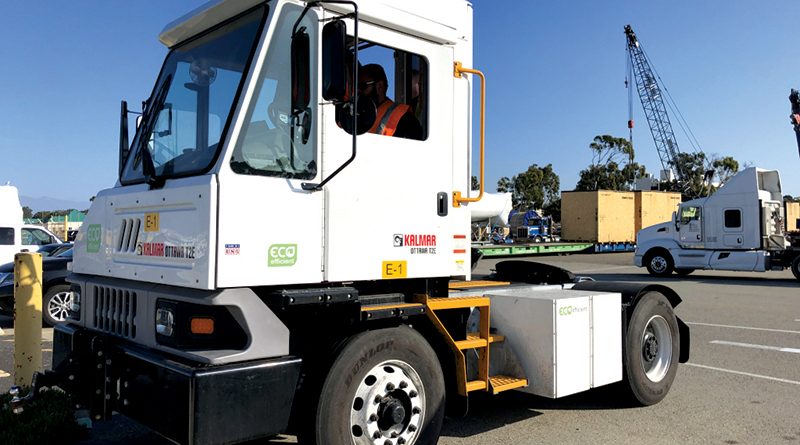 The new electrical terminal tractors were manufactured by Kalmar, a U.S. company focused on cargo-handling solutions for ports, terminals, and distribution centers. Photo Provided by the Port of Hueneme

The MOU facilitates the use of the new electric terminal tractors by stevedores in the Port of Hueneme.

PORT OF HUENEME一 On Dec. 20, the Port of Hueneme and the Oxnard Harbor District board voted to approve a Memorandum of Understanding with the port’s stevedores authorizing the use of two new electric terminal tractors owned by the port.

The MOU is a new model of operation for the port as the stevedores normally own all the heavy-duty equipment used for offloading cargo. The agreement authorizes the use of the port’s equipment by the stevedores to promote zero-emission equipment in the port to reduce greenhouse gas emissions.

“This model of the port owning equipment is new,” said Giles Pettifor, the environmental manager for the Port of Hueneme. “And the reason we [own] this equipment is because it came to the port via a state grant that was focused on demonstration and deployment of zero-emission cargo handling equipment.”

The eUTRs are part of the port’s ongoing climate action plan. They are funded by the Zero and Near Zero-Emission for Freight Facilities grant from the California Air Resources Board, which the port applied to in 2018 with the Port of Los Angeles and other partners.

“And so, the project we are participating under is called ZANZEFF,” said Pettifor. “…That is Zero and Near Zero-Emission for Freight Facilities. And it is a California Air Resources Board grant that we applied to as a partner with the Port of Los Angeles and some of the other partners.”

The grant is part of the state’s push for pilot programs to test out early versions of zero to near-zero-emission equipment, including the two new yard tractors, which will run on electricity rather than diesel-like their traditional counterparts.

The MOU will allow longshoremen to test out the new equipment and evaluate its success in a working port compared to diesel tractors that are currently in use.

Initial reviews of the tractors have been positive from longshoremen trained to use them, according to Pettifor. The tractors operate the same way as the diesel tractors, and the driving experience has positive with the bonus of no fumes.

“The initial experiences for the longshoremen, who are so critical to the success of the port you know we can’t do anything without labor is really positive,” said Pettifor. “So, we are really excited; this is a great inclination of what the future could look like for this whole clean energy future for the port.”

As a part of the grant, the port will also take part in an initiative to test the deployment of ten hydrogen fuel cell trucks in the coming year.

The trucks are currently in development but will be deployed throughout the L.A. basin to test the hydrogen fuel cells’ feasibility rather than the traditional diesel model.

“A tremendous amount of change is happening all the time in this industry,” said Pettifor. “…Ports don’t necessarily seem that exciting, but there is so much happening on this decarbonization front right now…California ports are advancing more quickly on the deployment of clean energy technology than I would say anywhere else in the world.”

The deployment of the tractors is set to begin in the first two weeks of January.