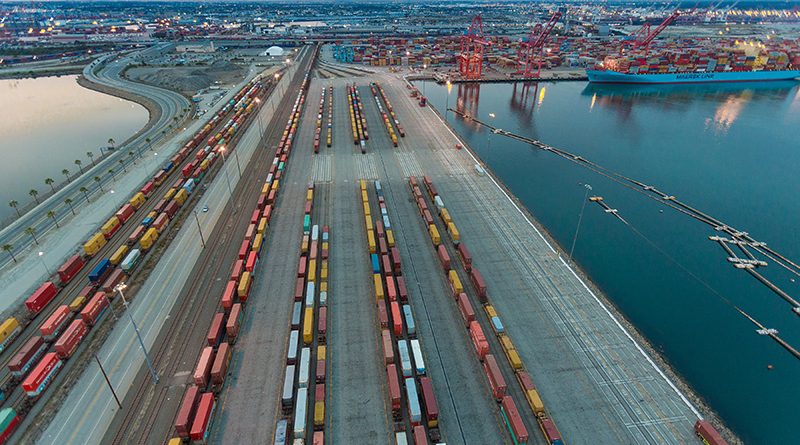 The Port of Long Beach’s plan to improve railways is moving forward after the accumulation of funding through a grant. The project will help increase transports from the port as well as decrease impact on the environment.

LONG BEACH—On Dec.22, 2021, the Port of Long Beach announced its acquisition of a $52.3 million grant for its rail project.

The grant comes from the U.S. Department of Transportation’s Maritime Administration (MARAD) to help fund the development of the “Pier B On-Dock Rail Support Facility.” This project will enable the nation’s second-largest seaport to move 35 percent more cargo by train which is projected to improve efficiency and lessen environmental impacts.

“The Port of Long Beach’s Pier B On-Dock Rail Support Facility qualified for the federal funding through the U.S. Maritime Administration Port Infrastructure Development Program,” said Lee Peterson, Media Relations Manager for the Port. “The funding from the program is specifically designed for capital improvement projects at U.S. seaports.”

The three-segment project will “add a 10,000-foot support track within a critical freight corridor, construct a new support facility for 24 locomotives, add three new yard tracks, and extend five existing tracks to increase operational efficiency for port cargo and enhance safety for rail workers,” according to the Department of Transportation’s announcement (DOT). Construction of the first phase of the Pier B Facility is scheduled to begin in 2023.

“This is great news to hear at the end of what will be our busiest year ever,” said the port’s Executive Director Mario Cordero in a Dec. 22 statement. “It will help to move cargo more efficiently through the port, getting needed products and goods to homes and businesses across America faster.”

The $52.3 million grant for the Port of Long Beach was allotted from an over $241 grant fund that will ultimately be dispersed amongst 25 projects to “improve port facilities in 19 states and one territory through the Maritime Administration’s (MARAD) Port Infrastructure Development Program (PIDP),” according to the press release from the DOT.

According to the White House, these grants are meant to demonstrate rapid action on commitments in the Biden-Harris Port Action Plan, which is intended to supply chains to meet demand resulting from the rapid economic recovery over that past year.

The first three projects include:

The scheduled project is the nucleus of the Port of Long Beach’s approximately $1 billion rail capital improvement program. Moving cargo by on-dock rail and directly transferring containers to and from marine terminals by train is cleaner, more efficient, and will reduce truck traffic. As a result, no cargo trucks will visit the facility, instead, smaller train segments will be brought to the facility and joined into a full-sized train.

MARAD’s Port Infrastructure Development Program is providing the grant. The funding from the program is designed explicitly for capital improvement projects at U.S. seaports.

Pier B On-Dock Rail Support Facility construction is scheduled to begin in 2023 and finished by 2032. The preparatory construction estimate for the locomotive facility is $15.7 million, while Pier B’s rail yard west and east expansion will cost $44.6 million and $24.5 million. The first arrival, departure, and storage tracks are expected to be completed in 2025, with additional tracks coming online in 2030, followed by project completion in 2032. The port also received a $10 million grant from the L.A. County Metropolitan Transportation Authority for the project under Measure R, I-710 Early Action Fund Program and $16.3 million in federal transportation bill funding managed by Metro and Caltrans. You can view the project fact sheet and more information on the project page.

With 175 shipping lines connecting Long Beach to 217 seaports, the port handles $200 billion in trade annually, supporting more than 575,000 Southern California jobs. According to the press release, the Port of Long Beach is one of the world’s busiest seaports, a gateway for trans-Pacific trade, and a trailblazer in goods movement and environmental stewardship.