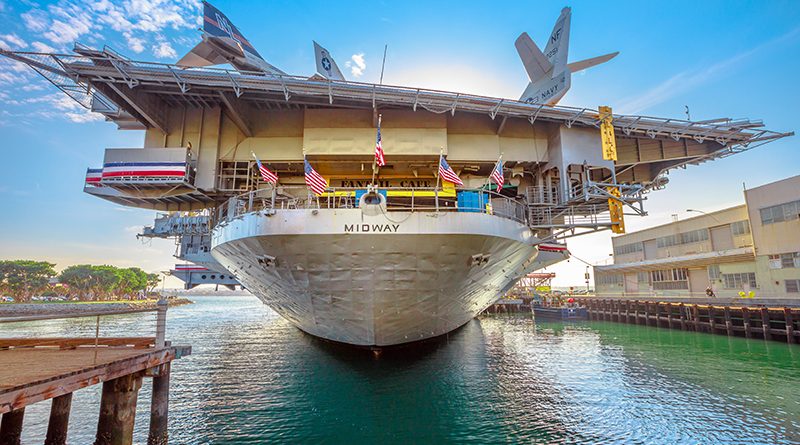 Navy Pier is a popular destination for military buffs because of the museum that is the USS Midway. Shutterstock image

On April 12, the Board of Port Commissioners approved a Memorandum of Understanding (MOU) that includes the Port’s commitment of $11.7 million in federal stimulus funding received via the American Rescue Plan Act.

“The Midway has agreed to contribute at least $30 million to the project. The Port $11.7 million in federal stimulus funds we’ve received,” said Brianne Page, Public Information Officer for the Port of San Diego. “The project plans call for the demolition of the headhouse on the pier, completion of pile improvements and pier reinforcements, as well as buildout of the park.”

“Our agreement with the USS Midway Museum is a major milestone in delivering an exciting new public park – and improving public access – on the North Embarcadero,” said Chairman Dan Malcolm, Port of San Diego Board of Port Commissioners, in the press release from the Port of San Diego from April 13. “In collaboration with the Midway and the California Coastal Commission, we will create a better experience for all who visit our San Diego Bay waterfront.”

With the approval of the MOU, Port staff will continue to collaborate with the Midway and the California Coastal Commission on the details of the park’s design on the approximately 5.7-acre pier. The Port will process a Coastal Development Permit (CDP) with the California Coastal Commission when the schematic design is complete. The Port anticipates the issuance of the CDP in early 2024. Before the construction starts, the headhouse will be demolished, and pier structural improvements will be completed. The current timeline for park opening is early 2029.

The Port’s most visible and popular public waterfront is the North Embarcadero, considered San Diego’s “front porch.” Converting Navy Pier to a park will add to the various public amenities and development the Port has delivered in the North Embarcadero in recent years:

For more information or to read the staff report visit the Port of San Diego’s website at https://bit.ly/3v1tpj4 or contact Brianne Page at bpage@portofsandiego.org.