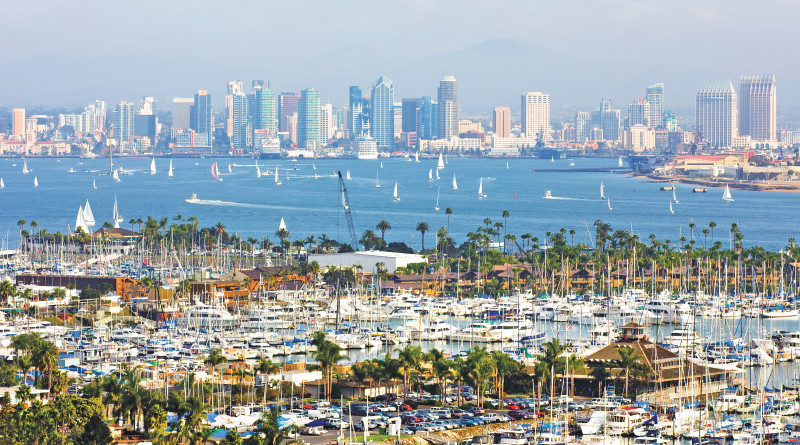 SAN DIEGO — Enacting a Total Maximum Daily Load (TMDL) policy might not be the only way to reduce copper levels in San Diego Bay – or any other harbor for that matter.

The Port of San Diego, angling to be on the cutting edge of environmental policy, is moving forward with its efforts to reduce copper pollution in the harbor by relying upon blue tech innovation.

Potential breakthroughs in developing copper reduction technology and non-copper boat bottom paints could be fostered by the port district’s incubator plan. The plan, consistent with Blue Economy principles, would direct investments into the creation, development and initial sustainability of environmentally friendly policies.

“There are many blue tech companies exploring technologies to effectively remediate contaminants in marine waters and sediments. As a result, some of these efforts have a direct co-benefit to the district’s environmental programs,” port district staff stated. “[We] recently began exploring ways in which blue tech could help reduce pollution in San Diego Bay.”

San Diego has been addressing copper pollution in its harbor since 2005, when the Regional Water Quality Control Board enacted a TMDL policy. Port officials are required to achieve a 76 percent reduction in copper levels at Shelter Island Yacht Basin by 2022.

About 98 percent of copper loading at Shelter Island Yacht Basin came from antifouling paints on recreational boats, according to port district staff.

A five-step plan was incorporated to address copper pollution at Shelter Island: test and research alternatives; develop policy or legislation supporting copper remediation; educate and reach out to boaters about alternatives; and, monitor/assess data to see what does or does not work.

The port district, however, expressed interest in pursuing other methods to reduce copper pollution in San Diego Bay. Port officials issued a Request for Proposals (RFP) in March 2016 to find “new or innovative approaches that either reduce input of copper to the bay or remove existing copper.”

“The goal of the RFP was to provide research and development funds that promote the advancement or improvement of environmentally sustainable business practices and/or technologies that reduce copper and improve water quality,” port district staff stated.

Port district staff ultimately determined it could identify a pilot project to pursue long-range solutions through an incubator plan. Discussions are currently in play, according to port district staff, with Red Lion Chem Tech Inc. and Rentunder AB to pursue copper remediation opportunities.

“Staff has initiated discussion with [Red Lion Chem Tech and Rentunder] … so the copper reduction technology could be considered as initial pilot projects for the blue tech incubator,” port district staff stated in its report to commissioners.

A proposal for incubator partnership could be in front of the board by spring 2017. The port district is also pursuing new business proposals for blue tech innovation.

A “Blue Economy,” according to port staff, balances economic opportunity with responsible investment in a sustainable ocean economy.

“The Blue Economy is comprised of a wide variety of marine-dependent businesses such as aquaculture and fisheries, eco-tourism, scientific research, security, and ocean-based technology or blue tech,” port staff stated in a report to the Board of Port Commissioners. “[It] involves technological advances in emerging areas such as marine renewables and biofuels, marine biotechnology and robotics, and other ocean-based industries.”

Opportunities in blue tech innovation and aquaculture have been at the top of the port district’s strategic plan to engage in long-term marine planning and environmental stewardship.

“The aquaculture and blue tech incubator programs will serve as cornerstones for district’s Blue Economy vision and create an environment in which innovation can excel, by providing ocean entrepreneurs with key assets, such as land and water entitlements, permit-ready infrastructure, marine spatial planning tools, regulatory expertise, and mentorship,” port district staff stated.