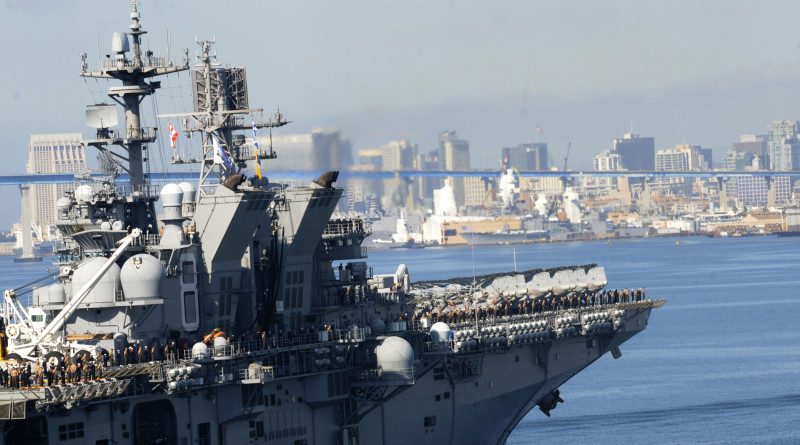 District claims bay waters could be contaminated by toxic chemicals.

SAN DIEGO — San Diego’s reputation for being a Navy town is not stopping the local port district from suing the military outfit for alleged environmental contaminations along a swath of waterfront property near Chula Vista.

The Port of San Diego reportedly sued the U.S. Navy, among other federal and military agencies, with the district faulting the naval service bureau polluting the bay’s waters with potentially dangerous chemicals. Such chemicals could cause several human health problems, including cancer and heart disease, according to a published news report.

Toxic pollutants from waterfront properties within San Diego Bay are threatening waters in the Chula Vista area, where military and industrial companies operated throughout the 1900s, port officials reportedly alleged in its lawsuit. The port claims the Navy is primarily responsible for allowing toxic chemicals to post a threat to aquatic and marine life within the bay.

“This property has a long industrial history associated with the military, and there is legacy contamination,” an official statement released by the port stated. “As the legal, regulatory and environmental steward of the public trust tidelands of San Diego Bay, we would be remiss if we ignored this issue.”

A port spokesperson added the lawsuit, filed in federal court Oct. 10, is part of a greater effort to clean contaminated sites within the bay.

“This litigation is one piece of many moving parts in our plan to remediate legacy contamination on the bayfront. We are pursuing parties responsible for historic contamination of the site, including the U.S. government,” the official port statement continued.

Port officials believe there is no immediate threat to human health due to the bay’s current toxicity.

“Some remediation has already been completed, and our efforts are ongoing,” port officials stated. “It’s important to note that there is no major development or residential use currently on this bayfront land, and therefore we are not aware of immediate risks to human health from legacy contamination.”

Toxic contamination along the waterfront and in the bay has been an issue since the 1920s.

The Navy has existed in San Diego since the 1920, according to a State Water Board report in 2015. Discharges from the U.S. Navy has deposited, either directly or indirectly, into San Diego Bay via Chollas Creek near National City, which is in between San Diego and Chula Vista.

“These discharges cause, and threaten to cause, a condition of pollution by unreasonably affecting the waters for beneficial uses,” the Water Board report stated.

San Diego’s Naval Base was used as a docking and fleet repair base for decades. The base began to expand during the height of the U.S. involvement in World War II.

“From 1943 to 1945, more than 5,000 ships were sent to the base for conversion, overhaul, battle damage repair, and maintenance; approximately 2,190 of these ships were dry-docked. The base was expanded in 1944 to include approximately 823 acres, over 200 buildings, a 1,700 ton marine railway, a cruiser graving dry-dock, 5 large repair piers, a quay wall totaling 28,000 feet of berthing space, and extensive industrial repair facilities,” the Water Board report added.

Elevated chemistry and toxicity levels were discovered after a Navy dredging project at the mouth of Chollas Creek in 2001.

The San Diego Regional Water Quality Control Board issued a cleanup and abatement order for the port district in 2012. The order held several organizations and agencies responsible for “elevated levels of pollutants” in the bay, including the San Diego Unified Port District, city of San Diego, British Petroleum, San Diego Gas and Electric, U.S. Navy and National Steel and Shipbuilding Company.

The Air Force was also named in the lawsuit, according to news reports.

Updated reports of the port district’s lawsuit against the Navy and the condition of San Diego Bay will be explored in upcoming issues of The Log.