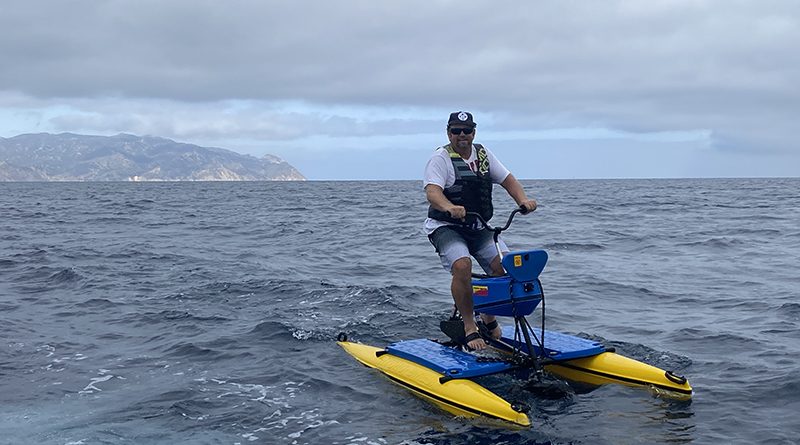 Matthew Thomas broke records in 2011 when he paddled his hydrobike from Catalina to Long Beach in just over seven hours. He took to the Pacific again, this time making his way to Newport Beach.

NEWPORT BEACH— On Aug. 20, Matthew Thomas, a coma survivor, took to the ocean once again to re-do his record-breaking 2011 journey.

In 2011 Thomas crossed from Catalina to Long Beach in seven hours and 15 minutes on a hydrobike, offering inspiration for others suffering from head trauma. For take two, Thomas took on the Catalina crossing again but aimed his bike further south to Newport Beach.

In about 11 hours, in conditions of three-to-four-foot swells and winds at 10 knots, Thomas once again pushed himself and his hyrdobike to his limits to support coma patients, head trauma victims, and others suffering from brain trauma.

“My main goal is to represent coma people, head trauma victims, stroke victims…,” said Thomas. “It is just that you can do anything when you are doubted; I am doing things. I did mine through prayers and pedaling and, of course, a little cussing out in the middle of the ocean no one heard except my chase boat.”

In 1991 Thomas was a promising athlete fresh out of high school. He had been offered a football scholarship to Brigham Young University and was living a normal and independent lifestyle.

June of that year, Thomas got in the passenger seat of an intoxicated friend’s Volkswagen Beetle. Unfortunately, he was involved in a serious accident when they went over a 30-foot bridge leaving his friend with a broken leg and Thomas in critical condition after being thrown through the car’s windshield and landing on rocks.

Doctors gave him a five percent chance of life and told his family that even if he did wake up from his coma and survive, they shouldn’t expect much.

Thomas woke up in Northridge Hospital Medical Center after three months and underwent an intensive 12-month therapy program to relearn how to walk, talk, read, and write.

He and his mom moved to Newport Beach, where he underwent another two years of therapy at Coastline Community College’s Acquired Brain Injury Center, which specializes in retraining for adults with brain trauma.

Thomas surprised doctors with his fairly quick recovery. Then, in 1993, just two years after his accident, Thomas’s neighbor Jim Raué bought two hydrobikes and put Thomas in charge of cleaning the bikes, which seemed to add to Thomas’s recovery efforts.

His cleaning eventually led to riding the bikes. Although Thomas remains partially paralyzed on his left side, he calls it being “super-duper happily partially paralyzed.” The partial paralysis can make some motor skills difficult, including balance, but the hydrobike is built on a sturdy platform which gives Thomas freedom on the water without worrying about his balance.

On his second go-round, Thomas describes not being able to see the shore for five or six hours and then only catching a glimpse of his destination.

He relied on straight determination, the grace of God, which he attributes to his journey through recovery and his efforts to help others, and a good helping of curse words to get himself across the 30-mile stretch.

“Praying, and peddling, and cursing, that kept me going,” said Thomas.

He was pushed a little off course and ended up between Huntington Beach and Newport before backtracking and correcting his course to get to the Orange County Sherriff Harbor Patrol Station in Newport Beach. Still, he reached his goal in the end, 11 years after his first journey and 31 years after his trauma.

Over the past 31 years, Thomas’s journey has led him to share his experience with others and even start a non-profit called Positive Matters, to advocate and support head trauma and coma patients through education and resources.

In his YouTube video series, Coma-dentials, Thomas shares his experience of going to hospitals to work with and support other patients who are working on recovering their own motor skills.

Thomas is known for having a deep connection with the patients he volunteers with, singing with them, participating in their physical therapy, and standing by them to encourage them to grasp life again with an enthusiastic “whoo hoo hoo.”

You can learn more about Thomas’s journey through “Straight Out of a Coma,” a documentary “coming at you from the frontal lobe down to the vocal cords,” detailing his journey. Check him out on social media at Matt Thomas, Coma-dentials, or at positive-matters.org.