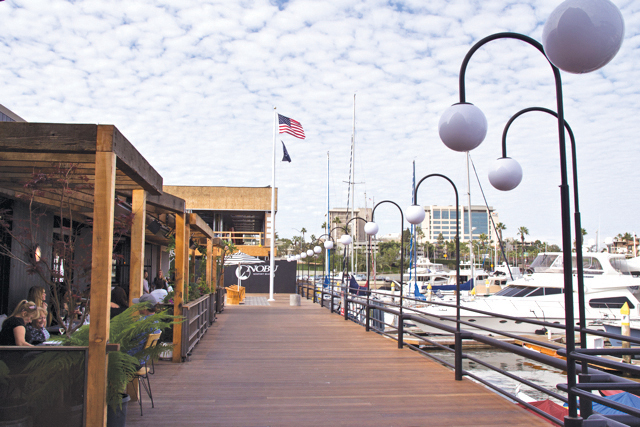 NEWPORT BEACH — Lido Marina Village is finally open for business with plans to include a public dock at one edge of the waterfront plaza formally approved by the California Coastal Commission.

Meanwhile, the California Coastal Commission has approved construction of Central Avenue Public Pier in the Newport Harbor to access the village. This waterfront development will include a public waterfront boardwalk, specialty shops, restaurants and creative offices as well as a public dock with slips.

Newport Beach Harbor Resources Manager Chris Miller stated, “We are happy to see [Lido Marina Village] redeveloped into a newer, modern marina. As of now, there aren’t any available docks or side-ties for the public to use to disembark and enjoy the upland property. The new design, however, has a transient dock at the far western side of the marina. With that said, the city is proposing a new transient, public dock at the adjacent street end at Central Avenue just west of the Lido Marina Village marina and the Elk’s Lodge. We’re envisioning this dock to assist boaters as a convenient access point to the Lido Marina Village area.”

On Nov. 4, phase two of the Marina project was approved by the California Coastal Commission. This second and final phase of the project involves the construction of a new public dock. Currently, there is no public access from the harbor to Lido Marina Village, but plans are in place and moving forward to create Central Avenue Pier. It will consist of an 84 foot by 10 foot float, a 40 square foot gangway platform and a 50 foot by 4 foot gangway. The dock float will have a low freeboard design to allow for docking of smaller boats and kayaks.

The city of Newport Beach will use money provided by the Newport Harbor Yacht Club to install “a publicly accessible tie-up facility for visiting boats of various sizes for short term visits in the area.”

This village already has high-end fashion boutiques, a fitness center and most recently a restaurant open for business. Strolling through the village, visitors will come across various picturesque spots to lounge and relax while taking in the scenic waterfront setting.

Currently, there are 19 shops open in the 17-acre Lido Marina Village and a waterfront food and wine establishment. There are six more tenants getting ready to move into the area that include other retail shops and upscale restaurants. Creative offices will occupy the second level of the buildings. There is an existing inland public parking lot south of the village. Street parking is available on Via Oporto as well. When the entire project is complete, the village will have a public dock with 47 slips as well as a total of 25 places to shop and dine.

The completion of Lido Marina Village is expected to be in early 2018.