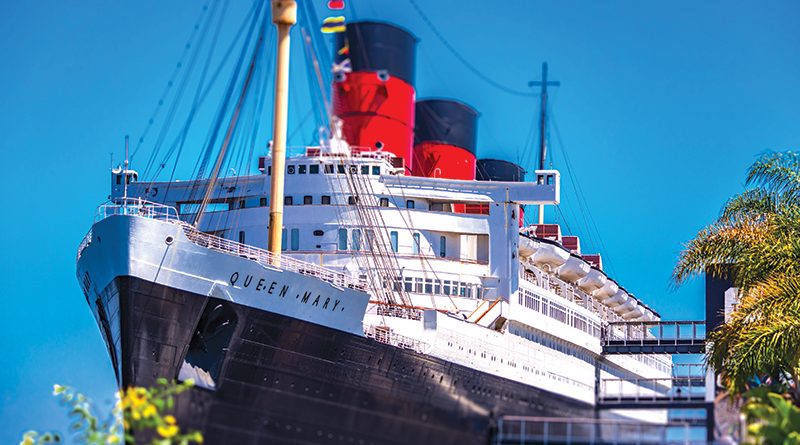 Over the last 50 years, Long Beach has recruited several companies, including Walt Disney Co., to manage the ship and develop the adjacent oceanfront property, with mixed results. Before the pandemic, the ship generated $3.3 million in tax revenues annually from its operation as a hotel, a venue for concerts and festivals, and a film location. Shutterstock image.

After considering the option of sinking the vessel, the City of Long Beach has opted to save the ocean liner turned floating hotel with a $5 million repair project to reconstruct the boat by the end of 2022.

LONG BEACH— The 88-year-old ocean liner in Long Beach, the RMS Queen Mary, was destined for permanent closure when the COVID-19 pandemic struck, but there has been a change in course after the news broke that the vessel would get a $5 million cosmetic repair.

In early January, the City of Long Beach announced they were preparing to start critical repairs to the Queen Mary, with fencing placed around the construction zone and staging areas prepared by late January. In February, the city began the first phase of critical repairs, which are anticipated to be completed later this year, allowing the Queen Mary to reopen to the public.

“It is our responsibility to preserve the Queen Mary and ensure this historic landmark is properly cared for,” said Mayor Robert Garcia in a press release from Jan. 27. “Now that the city has full oversight and control of the Queen, it’s important we make the critical repairs needed.”

In June 2021, the city regained control of the Queen Mary for the first time in over 40 years.

Since that time, with the help of marine engineering experts and previous studies, the city has designed the specifications and layouts for the required repairs to keep the boat afloat. In addition, it has set critical milestones for the project and an anticipated completion date later this year. The city has estimated the cost of the essential repairs to be approximately $5 million. Initial funding of $2.5 million was approved by the Long Beach City Council as part of the city’s Fiscal Year 2022 budget, utilizing Tidelands Funds, with an additional funding request to be presented to the city council in the coming months. In December 2021, the city received approval by the State Lands Commission to use Tidelands funding, as required by state law, which cleared the way for work to begin in February.

As of March 25, the Queen Mary Lifeboat Disposition has been extended by 31 days from its original closure or March 25 to April 25. The extension and RFP can be found via the PlanetBids Vendor Portal and are accepting solicitations from interested parties who would like to obtain a part of this historic boat.

As a separate contract, the city will install new permanent bilge pumps to discharge water intrusion in case of an emergency. Additional improvements to the bulkhead, emergency generator, and water intrusion warning system are forthcoming. Due to decades of deferred maintenance by former ship operators, these repairs are needed and critical for the boat’s preservation. Earlier this month, the city made repairs to re-light one of the ship’s exhaust funnels, a skyline focal point illuminated by several spotlights positioned on the deck. Repair work was done to ensure the safety of the electrical systems and proper functionality of the lights to the surrounding circuits, the electrical timeclock, and lighting fixtures.

“Addressing these critical repairs has been a long time coming and an effort that will greatly benefit the structural safety and historical preservation of the Queen Mary,” said First District Councilwoman Mary Zendejas in the press release. “With the City now overseeing control of the ship, I am confident this year will bring tremendous progress towards protecting this historic feature of our community.”

Thirteen original lifeboats will be disconnected from the boat and temporarily stored. At the same time, the city is looking for interests from museums and other qualified non-profits who may be interested in preserving a lifeboat. Interested organizations should contact Johnny Vallejo at Johnny.Vallejo@longbeach.gov.

The electronic bidding system, PlanetBids, provides an easy and accessible way to submit your proposal while ensuring fairness during the application and selection process. Registered companies and organizations will receive customized emails notifying them of specific bids, the ability to search for submissions, and download documents. The lifeboat removal is expected to take approximately two weeks, weather permitting.

The Queen Mary will remain closed to the public until the repairs have concluded but will continue to be available for filming to help generate revenue to support the ship’s operations.

In June 2021, the former lessee, Urban Commons Queensway LLC, surrendered its existing leases and filed a motion to reject those leases through its bankruptcy process formally. The City’s Department of Economic Development oversees the financial agreements associated with the Queen Mary, while the Department of Public Works leads the physical repair and preservation efforts.

The city created a Queen Mary Updates webpage to keep the public informed, which includes the Queen Mary’s economic impacts on the city, a historical overview, the city’s stance on preserving the historical integrity and structural safety of the ship, and the city’s short- and long-term goals in the preservation process.