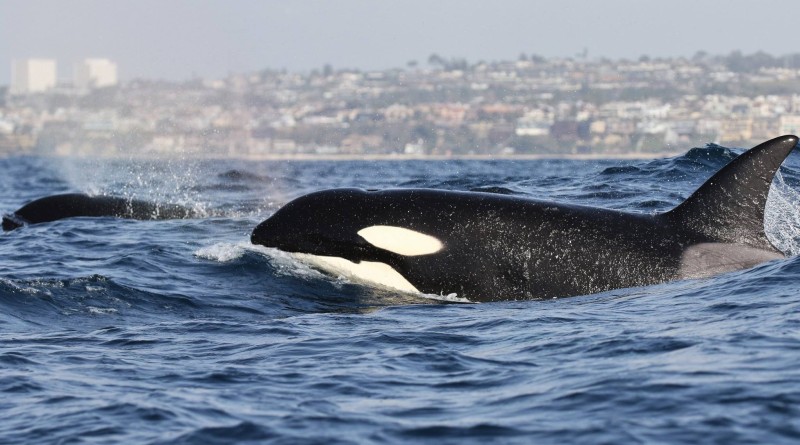 A huge pod of 30 to 40 (possibly even 50 or more) killer whales swimming close to the Southern California shore does not happen every day. Yet this is precisely what happened on the last day of November.

Killer whales “have a preference for harbor seals, but also eat California and Steller sea lions, Dall’s porpoise, dolphins, small whales, squid, sharks including the great white and seabirds,” according to the Aquarium of the Pacific.

These orcas can measure 16 to 22 feet long and weigh 3,000 to 12,000 pounds. The size of the throat “is large enough to swallow small seals whole,” as stated on the Aquarium of the Pacific website. Female killer whales can live up to 90 years of age.

In addition to all the excitement of the cruising killer whales, there were also sightings of several gray whales on that same day. The gray whales are starting their southbound migration as these killer whales traveled north.

“It was personally my first time ever seeing a sperm whale,” Capt. Ryan Lawler of Newport Coastal Adventure stated. “Typically they are at least 50 miles offshore in Southern California, yet this pod passed as close as 4 miles away from San Pedro.”

Harbor Breeze Cruises notified Newport Coastal Adventure the sperm whales were heading towards them about 24 miles from Newport Harbor. There was a pod of approximately 20 sperm whales.

“We called our passengers to see if they could arrive early so we would have the opportunity to spend time with these extraordinarily rare whales,” Lawler told The Log. “[The whale watchers] were able to show up an hour early at 2:00 p.m. and off we went.”

Sperm whales are the largest toothed whales and can measure as long as 60 feet. Their diet consists mostly of squid but are also known to eat bottom fish including sharks, according to the Monterey Bay Aquarium.

In a 24-hour period, Lawler witnessed both sperm whales and killer whales off Newport Beach as there were more killer whales swimming in local waters days after the initial sightings.