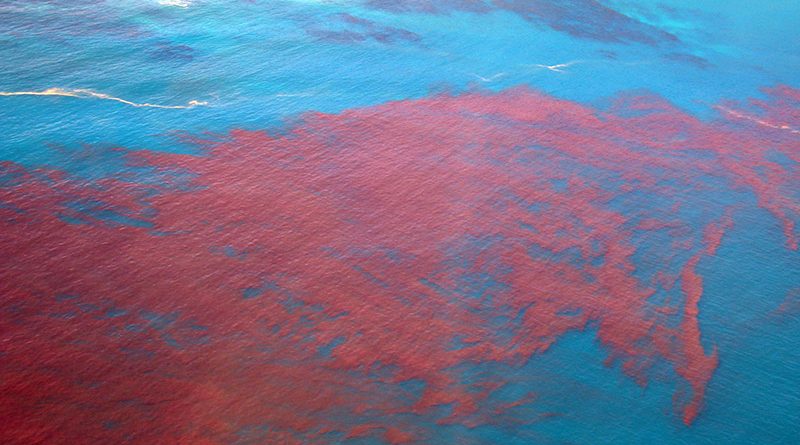 During the day, red tide brings a bright red color to the water. In the evening the blooms are bioluminescence and are a glowing blue color. Shutterstock image.

A red tide bloom is moving south in Orange County, which could impact animals such as birds on the beach and ocean.

ORANGE COUNTY— On April 25, a red tide bloom became visible on Orange County coastlines from Huntington Beach up to Santa Monica after first being spotted off the Newport Beach Pier.

Red tide, a harmful algal bloom (HABs), occurs when microscopic algae multiply to higher-than-normal concentrations, often discoloring the water. The algal bloom can last from days to months and can not be cleaned up.

The length of time that a plankton bloom continues depends on many things, such as available nutrients, sunlight, water temperature, changes in wind or surf conditions, competition with other species, and grazing by zooplankton and small fish. In California, the most frequent observations of red tides occur between Santa Barbara and San Diego.

Most red tides in California occur between early spring, February through March, and late summer, August through September.

“In this case, it’s A. sanguinea and that has a particular bloom that’s happening right now,” said Debbie McGuire, the Wetlands and Wildlife Care Center executive director in Huntington Beach. “The water temperature and air temperature are all factors.”

McGuire says that birds can be affected by red tide in addition to marine wildlife. This is because some of the algae that cause a red tide produce potent toxins, which are harmful chemicals that can kill fish, shellfish, mammals, and birds.

“The feathers become parted. They get wet and waterlogged. The bird gets cold, they beach [themselves], and they beach themselves because they become hypothermic, and they can no longer have that nice, little feather wetsuit on them,” McGuire said.

Birds can lose their feathers’ waterproof ability when they swim through the red tide and foam. As a result, this species of red tide has the potential to harm many of Orange County’s local sea birds, like the brown pelican or western gulls. It can also be harmful to dogs who encounter it while at the beach.

The Wetlands and Wildlife Care Center in Huntington Beach are on standby if they have to take in birds.

McGuire says if they do, the birds will have to be rinsed and washed to start recovering.

She also says there are different precautions for humans and pets. For example, if people eat fish or shellfish that have been in the water with toxic algae, it can make them sick.

“This particular one can be a skin irritant, so if you’re out there swimming in it or something, you might notice that you’re itchy and feel uncomfortable. So, you just need to wash it off. Same for your pets. If you’re a dog at the dog beach, you wouldn’t want them to swim through it or drink it,” said McGuire.

McGuire says the bloom can last for any amount of time, depending on the water and air temperature. McGuire suggests that if beached birds are spotted, let your local lifeguard or animal control know so they can be treated.