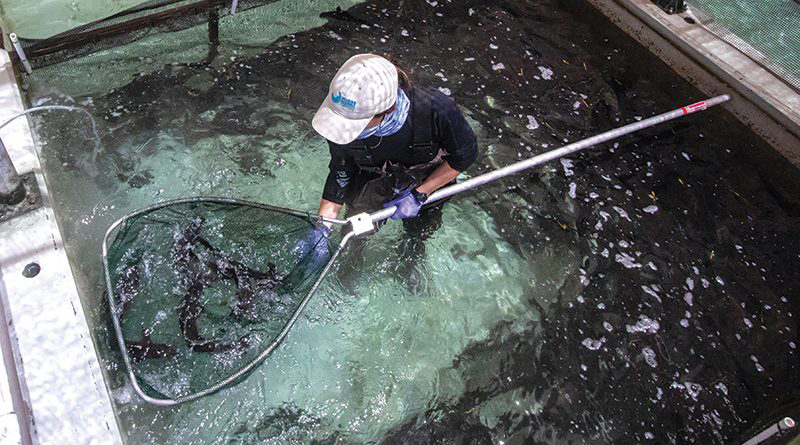 REDONDO BEACH— At the Redondo Beach Harbor Commission meeting on July 11, the commission unanimously voted to create a subcommittee that would work with staff for the reestablishment of the White Sea Bass Program. Committee and staff are charged with finding the dimensions of the grow-out pens, determining several in-water locations throughout the harbor for a temporary location, starting a water quality survey, and adding plans for a permanent location for the grow-out pen in the harbor revitalization project attached to the future dinghy docks or sport fishing pier.

During the meeting, the commissioners heard a staff report with several suggestions for reestablishing the white sea bass grow-out pen in King Harbor.

The White Sea Bass Program is a part of a larger program run by the Hubbs-SeaWorld Research Institute to restore depleted sea bass populations in California. There are several grow-out facilities up and down the coast of Southern California that work with volunteers and cities in conjunction with the research program to allow juvenile sea bass to grow and acclimate in protected pens within ocean water.

The program in King Harbor closed due to a lack of funding in 2019 but plans to reopen the facility have been a part of the larger discussion on revitalizing the harbor.

In the report heard on July 11, harbor commissioners were tasked with identifying and reviewing what would be required to reopen the program.

The report presented by Waterfront and Economic Development Director Greg Kapovich was from a previous 2020 proposal from the King Harbor Enhancement Foundation. The proposal touches on equipment, spacing criteria, and identifies a couple of places in the harbor to place the pen.

The proposal included a sketch with a rough idea of how the facility would look. In the sketch, the in-water tank would utilize an existing 36-foot-long boat slip. The slip would accommodate a 5,000-gallon in-water tank, a floating dock to accommodate a lockbox for storing fish food, and cleaning supplies, and a walkway for access and fencing for security.

According to that proposal, the two best locations are at the entrances of basins two and three. In basin two this would put the pens near the harbor patrol and moonstone park, which presents accessibility problems because of security measures for the harbor patrol and basin three is near public slips, where vacancies are hard to come by.

Although the proposal suggested several locations for out-of-water tanks, the commission ultimately decided that an in-water pen was the most realistic between cost and environmental factors.

Out-of-water pens would require restructuring proposed facilities and would limit the city’s ability to use those facilities. In addition, pumping seawater in and out of the facility could present a detriment to the environment.

On top of that, several community members reminded the commission that when the original pen, which was an out-of-water tank, was operational there were times when the electricity in the out-of-water facilities failed, and the pen lost thousands of fish because the water stopped circulating.

Previous proposals from several years ago suggest putting the pen behind the renovated harbor patrol docks in basin two.

“It just wouldn’t eat up, you know, used slip space,” said Harbor Commissioner James Light. “It would probably drive-up costs because…you don’t have a slip infrastructure to build on behind it. That was something we had discussed extensively when we were talking about the whole upgrade to the docks for the harbor patrol.”

The pens would also require a good water flow to keep oxygen and temperature levels stable, requiring staff to commit to a water quality study of the harbor.

“The temperature in the harbor swings wildly. There have been years where there’s been die-offs in there at least in the back corners of things,” said Harbor Chairperson Roger Carlson.

When it comes down to it, the committee is looking for a safe out-of-the-way place with open access for volunteers, a consistent water flow with stable temperatures, and the space to accommodate the pen.

Carlson suggested a walk-through that would look at the harbor patrol docks, areas along the edge of the basin areas, the existing bait barge, and as a last-ditch option at the end of the condemned sports fishing pier for a temporary location.

The committee will conduct a walk-through over the next few weeks and complete a water quality survey to gauge the summer water quality in the harbor. There is no set time for the Harbor Commission to meet again on the topic.