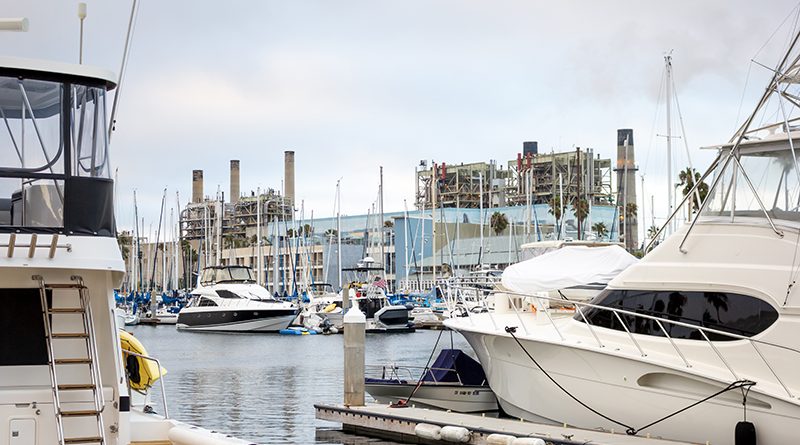 A view of the Redondo Beach harbor that surrounds the AES power plant. Shutterstock image.

The AES power has been granted two more years of operation despite all the concerns expressed by local non-profits and residents.

In 2010, the California Water Board endorsed a “once-through cooling policy.” This policy was set to close the Redondo Beach plant by Dec. 2020. Still, in Sept. 2020, despite the opposition and multiple lawsuits filed by the cities of Redondo Beach and Hermosa Beach, the California Water Board opted to extend the operation of the AES plant for an additional year as a backup plan for an emergency power facility.

The OTC Policy applied to 18 other existing plants, “with the combined ability to withdraw almost 16 billion gallons of water per day from the state’s coastal and estuarine waters using a single-pass system also known as once-through cooling,” according to waterboards.cs.gov. Unfortunately, the system severely damages the marine environment by sucking in enough seawater to fill Lake Arrowhead (roughly 48,000 acres of water volume), then spitting it out again, slightly warmer and a lot more dead. This process brings in marine life and kills fish that can get trapped against intake screens and larvae that are small enough to pass through the screens. The once-through cooling process is also destroying the wetlands that migratory birds inhabit.

The plant was built in 1954 and was taken over by AES in 1998, and is the only plant surrounded on all four sides by high-density residencies. The 67-year-old gas-fired plant, along with several other plants operating up and down the California coast- specifically those using ocean water to cool water intake structures were set to be decommissioned by the end of 2020.

Officials said that the climate-polluting facility will remain open until summer 2022 as an emergency option to combat heat waves that spark rolling blackouts like the ones California experienced in Aug. 2020.

Jim Light, a board member of South Bay Parkland Conservancy, a non-profit organization in Redondo Beach, advocates for removing the AES plant. “The reason we [SBPC] are involved in this is because of the wetlands and potential parkland that is right on the site,” said Light.

“Obviously, we are very disappointed by the decision; the people who made the motion and seconded it have been long-term employees of the PUC (Public Utilities Commission). They’ve had decades to work these issues to declare this an emergency. It lies in the face of data and what we see out there.”

Redondo Beach falls under the West LA Basin from a grid perspective. “Our section of the grid has excess power without any of the units (power plants) in Redondo with all the assumptions and margins,” said Light. “There is more than enough power in our section of the grid because of the new power plants and battery storage that’s been put online over the last ten years. New plants include the Alamitos plant, which was built in 2017.

In 2004 the AES power plant was labeled a major blighting influence, according to Light. “So, what we are actually doing is we are fulfilling shortages that are elsewhere in the state, mostly up north; so, we get the pollution, and they get the power, and that’s just wrong.”

Most power plant owners have shown compliance by either shutting down the inadequate generators, replacing them with new up-to-date units that don’t require ocean water for cooling, which has, in turn, dramatically reduced-harm towards marine life.

Arguably, the Redondo Beach plant was given plenty of time to swap out their units with ones better suited for a healthy marine environment. But, instead, they focused their efforts on fighting the residents who wanted a public park to replace the plant.

The link to sign a petition to shut down the AES plant can be found at https://www.change.org/p/the-california-water-board-shut-down-redondo-beach-aes-power-plant?recruiter=1217902902&recruited_by_id=670df5d0-1e5e-11ec-a299-f54cd43d349d&utm_source=share_petition&utm_campaign=share_petition&utm_medium=copylink&utm_content=cl_sharecopy_30085387_en-US%3A3.