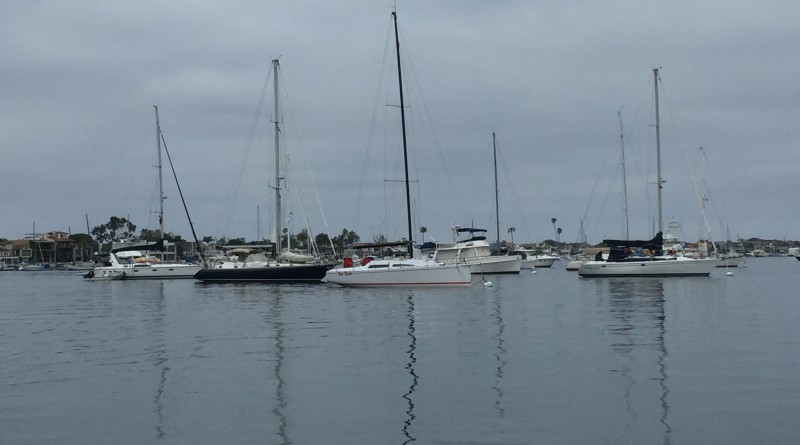 Regulating copper in Newport Harbor still a work in progress

Water Board takes no action on TMDL hearing after downgrading public hearing to a workshop.

IRVINE — Boaters in Newport Harbor could soon be facing strict copper restrictions … or it might be a while before a Total Maximum Daily Load (TMDL) policy is implemented.

The future of copper regulation and restriction in Newport Beach does not appear to be making much progress after the Regional Water Quality Control Board downgraded a planned public hearing on TMDL regulation for the city’s harbor to a receive-and-file workshop.

The regional water board announced in 2015 a plan to reduce copper levels in the harbor by 83 percent within 15 years of the TMDL implementation.

Copper levels in the waters of Newport Harbor are excessively high, the regional water board alleges. Local marinas and the harbor’s Turning Basin were identified as two Lower Bay areas where copper sediments were excessively high.

The next largest contributor of discharge is tributary runoff, which accounts for 3,000 pounds of copper annually, in the harbor.

If the regional water board’s TMDL policy, as currently proposed, is adopted then boaters would be forced to use less copper-based hull paints in order to collectively meet the copper discharge limitation of 6,060 pounds per year – which is 83 percent less than estimated current levels – within a 15-year period.

A major point of contention, however, is whether the regional or state water board based its 15-year copper reduction recommendation on inaccurate data.

Newport Beach city staff and many stakeholders specifically questioned how the regional water board determined the harbor was home to 10,000 slips.

City staff told water board officials the 83 percent reduction of copper in 15 years would not only be aggressive but also unreasonable and unlawful, in part because the plan assumed more crafts and vessels in Newport Harbor than actually exists.

Newport Beach Harbor Resources Manager Chris Miller told The Log a member of his staff conducted a physical count of vessels in the harbor and found 4,470 crafts.

The count was a snapshot in time, Miller said, meaning there is probably some sort of margin of error and there could be as many as a few hundred more vessels in Newport Harbor.

The regional water board’s estimation of 10,000 slips in Newport Harbor, however, is “simply not true,” according to Miller.

“We most certainly do not have 10,000 slips,” Miller said, acknowledging similar sentiments shared by stakeholders during public input at the Oct. 28 regional water board meeting.

“The copper TMDL is unlawful because … it explicitly relies on an implementation plan that requires local agencies to take actions the legislature has prohibited,” city staff stated in a comment letter to the Santa Ana Regional Water Quality Control Board.

“It is too short and fails to allow time at the beginning to address the many problems with the TMDL and its implementation,” city staff stated in its letter to the regional water board. “With the lack of available and affordable copper anti-fouling paint alternatives on the market today, it is irrational to adopt a schedule that does not allow the proposed new market to respond and develop.”

City staff added non-copper paint alternatives are either not available or ineffective.

“Alternative paints are not widely commercially available, do not have a track record of being effective and are not affordable,” the Newport Beach letter stated. “The only alternative paints with any degree of effectiveness are not recommended by US EPA’s technical contractor because they present serious environmental hazards.

Miller added Newport Harbor is not gaining any new slips and marinas are not getting any bigger. If anything the harbor’s vessel occupancy could be shrinking.

John Marshall spoke to the State Water Board on behalf of Recreational Boaters of California. He questioned how the regional water board came up with the numbers justifying its TMDL regulations.

Kevin Ketchum, past president of the Marine Recreation Association, also said the regional water board’s 10,000-slip estimate was inaccurate. He said the water boards should factor boat size into the equation, not just number of ships in the harbor.

“You’re saying 10,000 boaters are responsible for polluting Newport Harbor,” Ketchum said. “It’s like there is agenda against copper bottom paints.”

Imposing a 15-year TMDL policy and requiring an 83 percent reduction in copper discharge means a large majority of boaters in Newport Harbor would have to paint their hulls with alternative non-copper paints.

High levels of copper pose significant threats to marine life, according to a regional water board staff report.

“[Copper] can cause ‘sublethal’ effects on fish (gill and nervous system damage) and mortality in invertebrates (animals that live in the sediments and that fish eat),” the regional water board staff report stated. “The [copper] concentrations in Newport Bay are harmful to aquatic life, and must be decreased to meet the water quality standards to protect the fish and other marine animals living in the Bay.”

Are anti-fouling or non-copper bottom paints truly a better option for boaters than copper?

At least one boatyard operator told the State Water Board he believed paint manufacturers funded studies advocating for non-copper alternative paints. Boaters take their vessels out of the water more often with alternatives than boats with copper paints, according to the boatyard operator.

“The board needs to press reset on this issue,” Simpson told the agency, adding boaters cannot be pushed into a plan that’s not fully understood since true alternatives to copper paints are not known to exist.

Ray Hiemstra of O.C. Coastkeeper agreed TMDL and anti-copper programs are working, which is exactly why they need to remain in place.

He told water board members about boaters initially expressing interest in non-copper alternatives but interest stopped only when they were ready to switch bottom paints, hinting at the possibility of boatyard operators urging boat owners to continue using copper.

“This has been studied to death,” Hiemstra said, telling water board members the stakeholder process has been ongoing for an extended amount of time. “We need to see action.”

Meanwhile Newport Beach Harbor Commission Chair Paul Blank, who addressed the board as a private individual and boater, said he used alternative paints on his own accord on two occasions. On both occasions the use of non-copper alternatives were more expensive than copper paints.

The regional water board did not make any decisions at its Oct. 28 meeting; the agenda item was originally a public hearing but reclassified as a workshop a few days before the meeting, meaning all comments and testimony were received and filed.

The regional or state water boards have not yet announced a timeline of next steps and/or future action.

Austria, Belgium, Finland, Netherlands and the United Kingdom also regulated copper-based bottom paints, according to an alternative paint report published in 2004 by the University of California, San Diego.

A European Union-funded project on developing sustainable copper-free paints – Low-Emission Antifouling, or LEAF – studied the use of non-copper boat paints on recreational boats in 2015. Boaters from 15 countries, including Sweden, Norway, Italy, the United States and Denmark, registered to participate in the LEAF study.

Most of the respondents (38 of 55) said they were extremely or very likely to purchase an alternative non-copper paint created by LEAF if it were on the market.