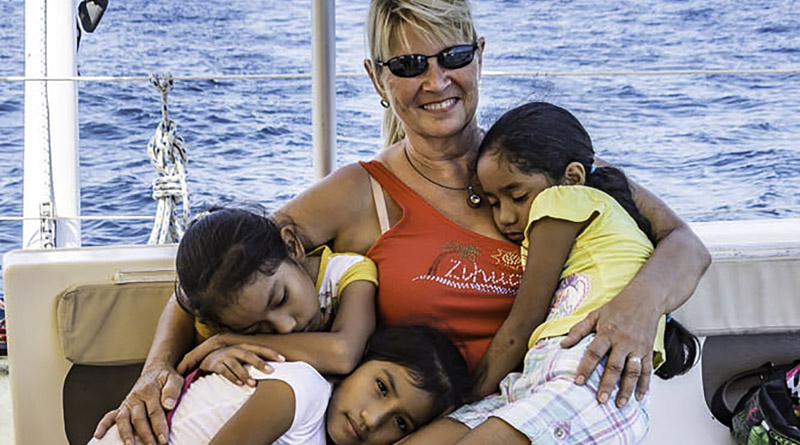 During Zihuatanejo’s Sailfest Yacht Parade, three students hang out on board with Carol Romain, chairman of the weeklong festival. Photo credit Margaret Reid.

ZIHUATANEJO – Sail and power boaters are invited to participate in Sailfest 2022 Feb. 21-27. The popular cruising destination of Zihuatanejo and Ixtapa will hold its week-long nautical festival of yacht parades, beach games, food, concerts, and tours of rural schools built by the Para Los Niños (For The Children) charity.

Visiting boat owners can volunteer in advance to host a few school children or a whole family onboard their boats for the Saturday morning Yacht Parade, a leisurely seven-mile round trip cruise from Zihuatanejo Bay to Punta Ixtapa and back. Although panga fishing supports the town of Zihuatanejo, very few rural families up in the Sierras have ever seen a yacht, and many of the children have never even seen the Pacific Ocean. For this reason, participating boaters have said the Yacht Parade was the most memorable event of their time in Mexico.

“My husband and I first began going to Zihuatanejo four years ago,” said Yvonne Thompson of Pender Island, British Columbia. “We were encouraged to volunteer … and I loved every minute of it. Although our role was small, we could see the benefit to the community and especially to the children it serves.”

Por Los Niños volunteers will take a limited number of guests on guided tours out to Colonial Miraflores to visit a couple of the rural schools and the library that the charity has built for the children. Boaters can meet some of the students and practice their Spanish and English skills. Donations of books in Spanish and other learning aids are always welcomed.

Students will entertain visitors during a Meet and Greet party on Zihuatanejo’s big municipal pier, where there will also be a lavish dinner under the stars. Visiting boaters who need to stretch their legs on shore can join the Tuesday and Thursday morning Sailfest walk or runs through the village parks and jungle-lined trails.

Rally Round the Rock is a smaller boat parade where boaters are invited to start at the pier and cruise a mile out the bay to circle around the landmark Roca Negra lighthouse and back. A chili cook-off and a champagne brunch are also scheduled this year. Throughout the seven days of festivities, raffles benefiting the students’ scholarship fund will be drawn during a major event, the live and silent auctions offer valuable merchandise and services donated by nice hotels, restaurants, and shops in Zihuatanejo and Ixtapa.

Cruising boaters actually began this festival in 2002 when they encountered a group of 22 indigenous children trying to study under the shade of a tree. The cruisers were so moved by the students’ eagerness to learn despite hardships that they held a fundraiser among their fellow boaters in order to fund and build them a single schoolroom. After that first year, a handful of cruising boaters kept coming back to Zihuatanejo, some eventually moved there full or part-time, and they formed the charity with local residents.

Since then, Por Los Niños has served the least fortunate in the rural region by building them 14 schools to serve 2,500 students a year, complete with kitchens, lunchrooms, playgrounds, bathrooms, a basketball court, and a library. More than 200 parents, teachers, and community members have helped the building projects by donating physical labor and building materials.

Low-income students with high grade-point averages receive 35,000 nutritious meals per year thanks to a Por Los Niños affiliate the Rice and Beans program. Each year, scholarships get rural students into English classes and send some to college. Several hundred brand new desks were donated and delivered in 2021.

The Por Los Niños charity foundation now partners with the Mexican government, Rotary International, and local restaurants, hotels, and stores that donate valuable items for the Sailfest raffles and live and silent auctions.

“The events are light-hearted but their purpose is serious,” said Carol Romain, chairman of Sailfest 2022.

To sign up to volunteer or to participate with your boat and crew in Sailfest, visit https://porlosninos.com/vessel-regisration/