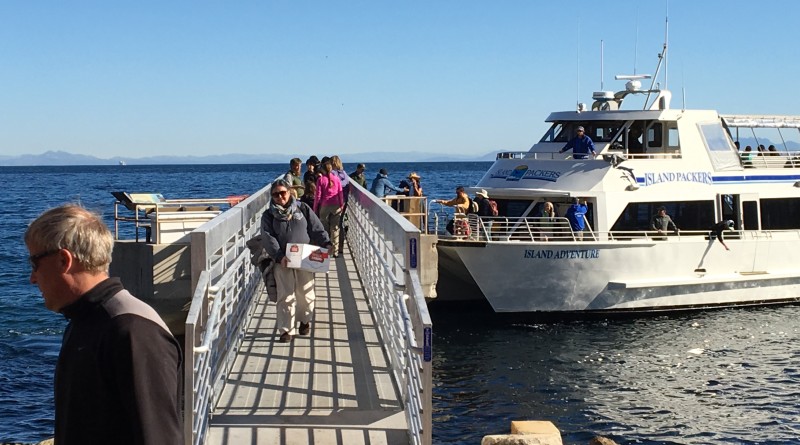 Pier was deemed unsafe for use in December 2015.

CHANNEL ISLANDS — A damaged pier on Santa Cruz Island was revitalized and reopened to the public after a one-year closure.

The pier at Santa Cruz Island’s Scorpion Anchorage, which was built from a flatbed railcar in 2000, resumed operations Dec. 2. It was shut down for repairs in December 2015. An Island Packers ferryboat brought the first round of passengers to the pier.

Officials removed the flatbed railcar Nov. 30 and replaced it with an elevated aluminum gangway. The gangway looks like a typical ramp commonly found at any marina or harbor.

The aluminum design means the pier is much lighter than the old flatbed railcar and can withstand the salty environment and high surf, according to park officials.

Park officials stated the aluminum-designed pier is a short-term solution. Construction of a permanent pier will be completed within two years, according to announced plans.

“Faced with this repair, we looked at options for a better fix and one that could be reused when a completely new pier is constructed. We decided that long-term, we needed a solution that did not involve climbing a ladder to the pier and back again to a boat. We decided to get out of the ladder business altogether,” Galipeau said.

Wave action, saltwater corrosion and sand loss caused the pier to deteriorate and be deemed unsafe for use.

The pier was in need of significant repair after severe winter weather at the end of 2015.

Visitor landings were further complicated when high seas caused all the sand from the local beach to be removed, leaving many boulders and rocks in its place.

Island Packers spent the past year bringing visitors to Santa Cruz Island by ferryboat and rigid-bottom inflatable skiffs. Six people at a time would be transferred from the ferryboat and onto the skiff to complete the journey.

Private boaters who normally came ashore aboard their own skiffs were often reluctant to do so in recent months, worrying the rocks and boulders on the beach might damage their craft’s hull.

Channel Islands National Park officials hope building an elevated gangway would address such a concern. When the new pier is completed, visitors will step from the boat to the gangway and reboard a vessel in the same manner.

John S. Meek Co. was hired to remove the railcar from the pier, install the elevated gangway and build the new pier.

Visiting boaters wishing to take advantage of the improved pier or want to make a beach landing should contact the Scorpion Anchorage National Park Ranger on Marine VHF 16 prior to coming ashore for current status and landing advice.

Boaters can also visit nps.gov/chis for a wealth of useful information and links to other important sites to help plan a trip to the national park.