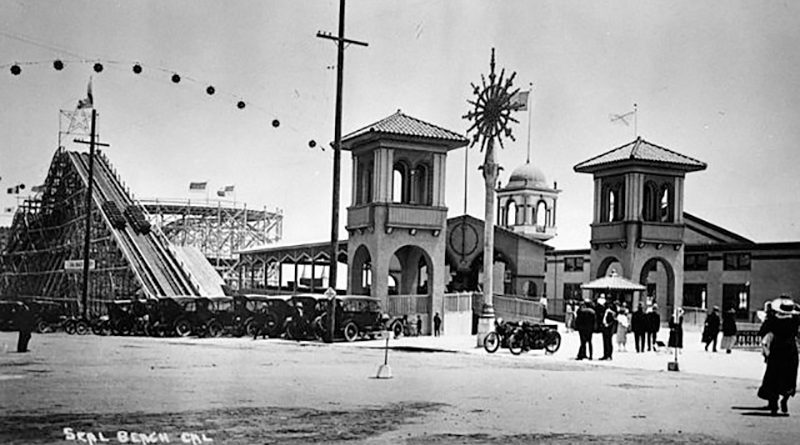 Seal Beach was incorporated in 1915, and by 1916, the city’s seaside amusement park, the Joy Zone, opened its doors, featuring one of the longest wooden piers on the Pacific Coast and the Derby Roller coaster.

The amusement park boasted carnival games, fair food, a bathhouse, a dance hall, and the Jewel City Café. City founder Philip A. Stanton hoped to make the Joy Zone the “Coney Island of the Pacific.” At its peak, there were as many as 20,000 visitors each week, according to the OC History Roundup.

Seal Beach also caught the attention of early Hollywood, with silent film stars like Fatty Arbuckle and Buster Keaton visiting the amusement park and studios looking to film “beach comedies” in and around the pier.

Notably, Cecil B. DeMille’s 1923 version of “The Ten Commandments” used the beach as a set for the parting of the Red Sea, according to The Orange County Tribune.

On the flip side, gambling, prostitution, and rum-running also made their way into the town. The prohibition in the 1920s encouraged a market for smuggled alcohol, and Anaheim Landing made a good drop-off spot.

The Great Depression changed the landscape when the amusement park was closed after the roller coaster burnt down. The park itself fell into disrepair, and the prohibition ended, removing the need for smuggled alcohol. Gambling was shut down in the 30s, and by the 1950s, families began moving into the city, changing the vice-friendly politics.