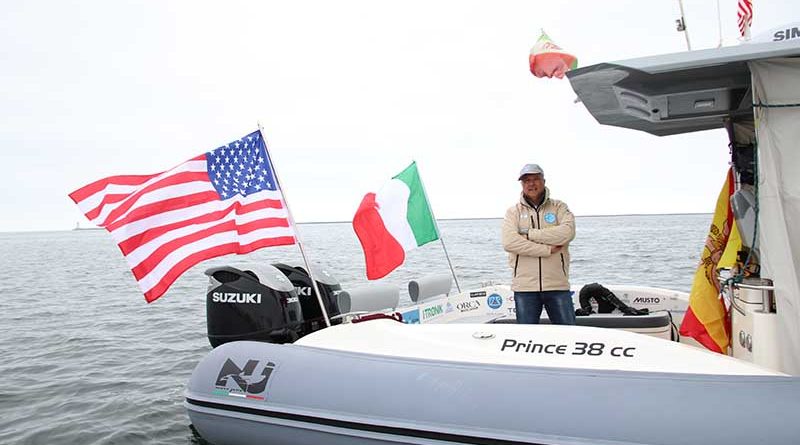 This adventure marks Davi’s longest journey and the first dinghy crossing from the Atlantic Ocean to the Pacific Ocean. Davì was not always alone; some of the world’s leading yachting personalities accompanied him during parts of the Ocean-to-Ocean RIB Adventure. Image provided by Suzuki Marine; Ron Ballanti.

Captain Sergio Davì, the Italian seafarer who first made headlines when he traveled from Palermo, Italy, to New York in 2019 in his 36-foot rigid inflatable boat (RIB), has completed his latest adventure across three continents and two oceans, covering almost 10,000 nautical miles.

SAN PEDRO- On May 23, Italian seafarer, Captain Sergio Davì arrived in San Pedro after conquering the Ocean-to-Ocean RIB Adventure, this is the first time a Rigid Inflatable Boat (RIB) has navigated two oceans, reaching the Pacific through the Atlantic.

Davì is an expert in oceanic sailing; he conquered the City of Angels aboard his Aretusa Explorer, a Nuova Jolly Marine Prince 38cc inflatable boat, powered by two high-performance Suzuki DF300B dual prop outboards with eco-friendly technologies and equipped with top-of-the-range Simrad marine electronics, including the sophisticated AP ™ 48 autopilot, the HALO24 radar, and the NSS evo3S multifunction display equipped with C-MAP cartography.

“The objectives are actually multiple; however, the main one can be considered that of the challenge with oneself, therefore the passion put in place to achieve precisely one’s objectives,” said Davì through his translator Dionisia Bellavista. “The stress test of on-board equipment should not be underestimated in order to contribute to the improvement of navigation technologies according to a vision of sustainability. Last but not least, the goal of scientific research by collecting water to monitor the presence of microplastics and heavy metals.”

The challenge revealed impressive numbers: a total 9201.8 nautical miles traveled along a route that stopped in 12 countries in Europe, Africa, and the Americas. The Ocean-to-Ocean RIB Adventure started at Palermo, Italy, on Dec. 15, 2021, and made several stops in Spain, Gibraltar, Cape Verde, French Guiana, Trinidad & Tobago, Curaçao, Colombia, Panama, Guatemala, Mexico, and United States. The trip took almost 519 hours and 32 minutes which included 152-hour non-stop jump across the Atlantic from Cape Verde to French Guiana with a fuel consumption average of around 3.5 liters per mile.

“I had in mind to reach the goal in about 100 days,” said Davì. “Instead, due to several problems and unforeseen events related not only to Covid but also to the marine conditions that were often too dangerous for sailing, especially in the last Mexican legs, it was not possible for me to hit the 100-day goal. However, these figures were rather indicative since I had always taken into account the possibility of being able to take longer. This is because it is completely useless to stress the boat and get excessively tired running the risk of not being able to reach the final destination due to any breakdowns or similar. It was not exactly a carefree and pleasant journey, however I tried to combine the hardness of the journey with the enjoyment of the landscapes and environments visited.”

Throughout the entire adventure, there was no lack of unexpected events and difficulties; from an obligatory stop in the Canary Islands due to COVID-19 to adverse maritime conditions and a hijacking of the Caribbean Sea to escape a boarding by pirates. After two years of hard work, amid unfavorable global situations, carried out in teamwork with winning collaborations, Captain Davì can put his name on another significant accomplishment for world boating.

“I got sick during the transfer from Lanzarote to Gran Canaria, where once I arrived, I realized I wasn’t feeling well at all,” said Davì. “After a couple of days, I had a bit of fever and felt a lot of tiredness, so I took the swab and I tested positive. At that point I immediately notified the Spanish authorities who instructed me on the procedures to follow, which are quite simple. In fact, in the absence of symptoms, after 8 days you can go back to freedom on your own. The covid had left me a lot of tiredness, which is why I left Gran Canaria after 15 days.”

Davì dedicated his voyage to issues around ocean health. During the crossing, he collected seawater samples to assess the presence of microplastics. In addition, he carried out the analysis of metal traces, particularly on under-researched or specific geographical points of reference. Davì partnered with the Experimental Institutes for Zooprophylaxis of Piedmont, Liguria & Valle d’Aosta, and Sicily to examine the dangers of ocean pollution on human health specifically for this trip.

Davì relied on Simrad’s NSSevo3S™ display throughout his voyage and networked together to have all the information available at any time of the crossing. Fundamental to safety are the HALO24 radar and AIS technology. This system identifies other vessels around his boat and allows them to be recognized by other boaters via the VHF signal. In addition, the Simrad® AP™48 autopilot interfaced directly with SeaStar’s Optimus steering system will enable Davì to be hands-free as needed during his solo navigation.

“Surely the final part [was the most difficult part], for two reasons,” said Davì. “In the first place, because a bit of tiredness was starting to arrive. Secondly, because the sea of the last Mexican lags has been prohibitive for sailing for long days, and this has been a cause of great stress for me. However, I managed this stress by paying the same attention and concentration as in the first days of adventure. I can say with certainty that the best part was actually enjoying the whole trip in its entirety and complexity, because each place, each country had a particular charm. Obviously, after the Canary Islands, where I have been several times, reaching new destinations aroused greater curiosity. Of course, the United States as the final destination of my adventure aroused unique emotions in me.”