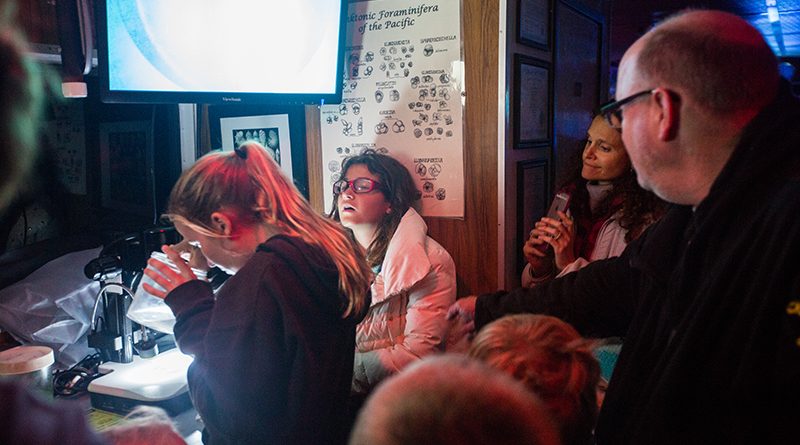 Bioluminescent organisms are pulled up to the boat by a marine met, collected in buckets, and transferred into clear jars for guests to observe and touch. Image courtesy of The Ocean Institute.

The Ocean Institute in Dana Point offers a glowing educational night cruise through a luminescent ocean to observe, touch, and experience bioluminescence.

DANA POINT— The Ocean Institute in Dana Point offers a two-hour bioluminescence night cruise from 8-10 p.m. through the end of summer. The tour is offered each summer annually and will continue to the end of October with four dates remaining.

The cruise is guided by scientists and captains from the Ocean Institute. They provide an abundance of knowledge and commentary on the bioluminescent organisms that light up the ocean.

Guests board the R/V Sea Explorer and depart from the institute to explore the luminous underwater world with guest appearances from marine birds, dolphins, sea lions, and of course, bioluminescent plankton.

Once the captain arrives at the destination, a meter net is thrown 600 feet deep to capture thousands of drifting organisms which can make their own light.

“The marine net is a net that a crew member will cast out to collect the bioluminescent specimens for people to interact with on the boat briefly,” said Ocean Institute Communications Specialist Miranda Lentz.

The net is dropped and then pulled back up, covered in tiny lights of up to one millimeter. The crew then pours their collection into a bucket to bring them aboard before transferring them into observation sinks for guests to get a closer look. The organisms stick to the scientists’ hands after collecting and handling the net, causing a glow wherever they touch.

The organisms’ glow will begin fading after a few minutes when the chemical reaction causing the bioluminescence needs to be replenished. When the glowing dies down, the staff focuses on the other creatures they dragged up, such as jellyfish and krill.

Guests get to witness the food chain in action under a deployed squid light after the organisms are dumped back into the ocean and begin attracting sea creatures.

“Once everyone gets the opportunity to interact with the specimens, the crew may use a light to attract squid to feed on the specimen as it is released back into the ocean,” said Lentz. “I’ve also heard stories of sea lions following the R/V Sea Explorer to feed on the squid that follow the release of the specimens.”

Bioluminescent dinoflagellates are a type of plankton, a tiny marine organism that can sometimes cause the ocean’s surface to sparkle at night. The light is produced by a chemical reaction within a living organism.

The group of chemicals involved in making plankton glow is broadly called luciferins. The light is produced by a series of oxidation reactions set off by a catalyst called luciferase. The bioluminescence in plankton is very high in several types of plankton and is a form of cold light also referred to as luminescence. Some bioluminescent organisms do not synthesize luciferin. Instead, they absorb it through other organisms, either as food or in a symbiotic relationship, according to National Geographic.