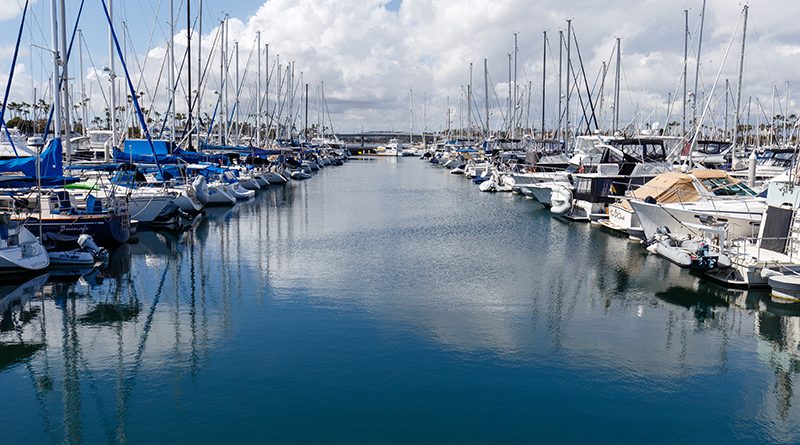 The Alamitos Bay Marina is the oldest and largest marina in Long Beach. It opened in the late 1960’s and hosts 1655 slips from 20’-120’ for recreational boaters. Shutterstock image.

At its monthly meeting on July 14, Long Beach’s Marine Advisory Commission (MAC) reviewed the proposed slip fee; the decision was approved and filed by the city council. The commission can make comments and recommendations but has no authority to set or change the fees. The approval is awarded by city council, who will regard the comments and recommendations presented by the commission when they award the official approval of the fee increase in August.

The Long Beach marinas three percent slip fee increase is part of the proposed City of Long Beach FY23 Budget and is meant as a solution to bonds which were taken out in 2015 and are due this coming year.

On May 15, 2015, the city council authorized the issuance of the Marine Revenue Bonds, Series 2015, in an amount not to exceed $125,000,000 for waterside improvements to the Alamitos Bay Marina and to repay existing State Division of Boating and Waterways (DBW) loans. The bond proceeds totaled $120,796,830 of which $42,244,796 were allocated to the project, $61,471,754 were used to pay the DBW loans, and the remaining amount represents the cost of issuance and the amount deposited into a Bond Reserve Account.

The increase is part of an agreement reached in 2015 to issue $125 million in bonds to pay for a rebuild of the Alamitos Bay Marina, the largest municipally operated marina in the country; the Alamitos Bay Marina boasts 1,655 slips in seven basins. A minimum two percent annual increase is required by the 2015 Marina Revenue Bond issuance and approved by City Council action.

“Any additional percentage increase is intended to maintain the 1.25X Bond Debt Service Ratio and cover personnel and non-personnel expenditures,” said Todd Leland, Long Beach Marine Operations Superintendent in an email from July 25. “Note- This increase is below the FY23 City Cost Index (CCI) increase of 5.27%.”

Marine Bureau Manager Elvira Hallinan is cognizant of the impact fee increases have on Long Beach Marinas customers. Through fiscally responsible stewardship, Hallinan ensures that slip fee increases stay at the minimum two percent, or as near to that percentage as possible, based on the current and future economic well-being of the Long Beach Marinas.

A design-build approach for the Alamitos Bay Marina was approved in 2005, but construction didn’t begin until 2010.

In 2011, City Auditor Laura Doud issued an audit saying the city could not self-finance the entire multi-year project at one time. The city answered by breaking the rebuild into stages but had trouble keeping the project going, partly because of funding problems.

Subsequently, in 2015, the city agreed to issue a $125 million revenue bond sale to repay loans from the state’s Department of Boating and Waterways and to pay for the remainder of the construction. Those bonds were guaranteed by future slip fee revenue, including a deal to increase fees, as necessary, to keep revenues at 125 percent of debt service for that year.

The proposed fees are as follows:

City Council meeting agendas and minutes regarding the slip fees can be seen at https://longbeach.legistar.com/Calendar.aspx.