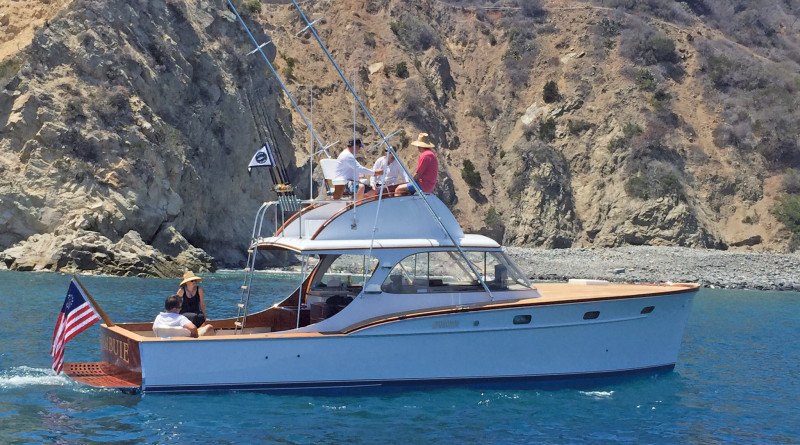 The Back Story: Alan Baron was perusing eBay for an autopilot part for his boat when he came across a 1956 Rybovich Sportfish Hull #23.

“It was such a unique boat with only 127 boats of this kind having been built since 1947,” Baron told The Log.

Baron, who wasn’t planning to get another boat, bought the 1956 Rybovich after coming across this classic boat on eBay. He refers to the purchase as his “barn-find Rybovich.”

A Slice of History: Drambuie was originally built for Dr. Jack Kevorkian’s father or grandfather. The second owner was the Roebling family, known for engineering and building the Brooklyn Bridge. The boat then went to the Kaiser family, of the steel and health company, for about 35 years. There was one other owner between the Kaiser family and the boat’s current owner, Baron.

Restoration: Drambuie was 75 percent restored by the prior owner but completely disassembled with the exception of brand new engines. Baron had the bridge removed to have it shipped to Newport Beach from Tacoma, Washington and then reinstalled the bridge. He coupled up the engine, installed the generator and the engine controls as well as reconfigured and installed the original galley along with the dinette and salon area. Baron also installed a tackle center, refrigerator, freezer, underwater lights and state-of-the-art electronics.

Drambuie appears 95 percent original from her exterior. Below deck, with the exception of the original copper drip pans in the engine, everything is 2015 technology.

What is in the name: The boat was previously named Dambuie. Baron thought the name was missing an “r” for Drambuie, which is an older flavor scotch. He felt the name was appropriate and “period correct.” Baron also liked the name in reference to the Drambuie classic fishing tournament held every year in the Caribbean.

Home Base: Little Balboa Island in Newport Beach has been Drambuie’s home since April of 2016. She is a member of the Balboa Yacht Club and Tuna Club of Avalon.

One thought on “SoCal Classics: DRAMBUIE”