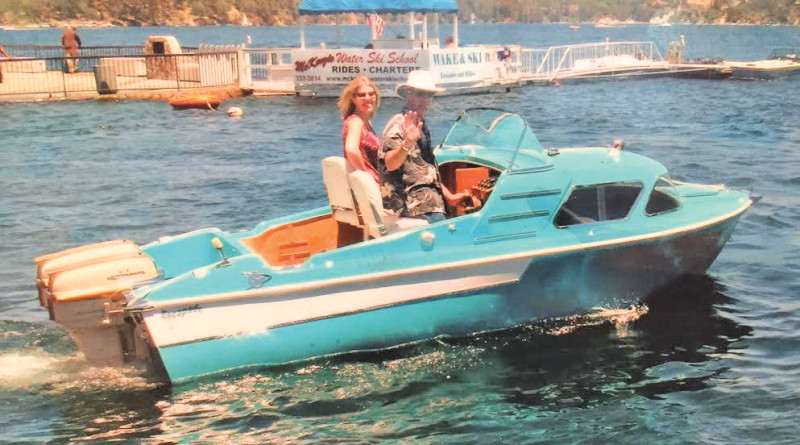 The Back Story: Escapade is a 17-foot Dorset of a Catalina Model and owned by Bahia Corinthian Yacht Club members Robert and Janet Kircher.

The previous owner, who lived in Las Vegas, was planning to throw the boat away when Kircher expressed an interest and made the purchase in August 2006.

Richard W. Dorst founded Dorsett, a boat-builder, in 1955. Dorsett had three plants. Escapade, it is believed, was built at the Santa Clara plant in 1959. In 1960, Dorsett Marine was sold to Textron Inc.

A Welcomed Project: Robert and Janet Kircher felt restoring the classic vessel was a worthy project, especially with all the adventures and new friends that will likely follow.

Restorations: About 30 percent of Escapade has been maintained in its original condition; the remaining 70 percent was restored and upgraded. The hull, superstructure and hardware are all original. The hull and superstructure have been repainted the original “Indian Turquoise” color with linear polyurethane paint. The hardware was re-chromed. The cockpit sole and 50 percent of the framing were replaced. The electrical, steering, fuel systems, upholstery and windows were all replaced during restoration. The window frames are original. While the motors are the same vintage, they were not on the boat when she was purchased. Escapade is powered by twin 1959 Johnson Super Seahorse outboards (35 horsepower each). The restoration project took four years to complete.

What’s in a name: Robert and Janet Kircher thought it would be a fun “escapade” to restore this boat. Hence, they appropriately named her Escapade.

Home Base: Escapade sits on the original 1959 EZ Loader trailer in Newport Beach.