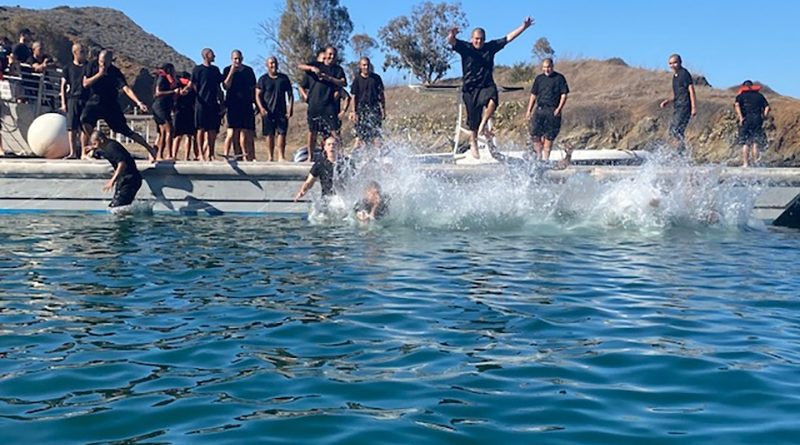 The academy makes the trip twice a year to Emerald Bay’s Boy Scout camp for community service and a bit of fun.

EMERALD BAY一 Sunburst Youth Academy, based in Los Alamitos, led a group of 116 cadets over to Catalina Island Oct. 15-17 for a community service project at the Boy Scouts of America Camp Emerald Bay.

This is the third trip the academy has made out to the island so cadets can experience the island and provide some much-needed assistance to the camp in the form of brush clearance, cabin cleanouts, and other maintenance activities that have fallen to the wayside since COVID-19 began.

“…As I began thinking about the need the Boy Scouts have and the needs the kids have, I saw a perfect fit,” said Jeannie Anderson, a paraeducator at Sunburst Youth Academy and organizer of the Catalina trips. “…Especially after COVID. The Boy Scouts had no campers for about a year and a half and there were roughly three people on staff that were running the entire camp. They did not have the manpower to keep up with all of the brush clearance and regular maintenance of the camp. They were buried under the amount of work that needed to happen.”

Sunburst Youth Academy is a for-credit five-month high school program for students between the ages of 15 and 18 who are considered credit deficient and are at risk of not graduating.

The students are considered ‘at promise’ and come from various backgrounds that can include gang influences, drug influences, or other situations that make it difficult for them to get a grip on their education.

This is a voluntary program, and students go through an application process before starting the program in either January or July. After that, they live on base at Joint Forces Training Base in Los Alamitos, where they will also attend school.

Anderson began organizing trips to Catalina with the academy in 2019 after a casual conversation with one of the military staff during a hike in the wetlands caught her attention.

“A couple of years ago I was on a hike with Sunburst, I am a paraeducator there, and we were at the wetlands. It was a super clear day and we could see Catalina,” said Anderson. “One of the military guys said, ‘I’ve always wanted to get the kids to the island’ and I was like hmmm I could probably do that.”

After that, an idea was born and Anderson sat down and began to strategize with Nate Erlandson, director of facilities for the camp for ways to incorporate the cadets and how to pay for the endeavor.

For the first trip, Anderson reached out to Corsair Yacht Club in Emerald Bay, where she and her husband have been members for the past 25 years, to talk about her vision and how to pay for the charter to get the kids to Catalina.

Corsair stepped up and raised enough money to pay for a charter for one platoon of 50 kids to come over to the island for the first of what would become a regular occurrence.

For the next two trips a non-profit out of Los Angeles, A Chance for Children, paid for the charter, a cost of almost $9,000.

Corsair continues to stay active with the event providing $3,100 this past trip for tools like rakes and brooms for the cadets to use on the island.

Financing the journey to the island has been a challenge for Anderson and the staff. Still, with the support of non-profits and the community, it has become a bi-annual event that allows these cadets to create new experiences and help the community along the way.

“Basically, many people have stepped up and supported our vision and our idea and have made it possible for us to get there,” said Anderson.

It is not all work and no play for the kids, aside from the hard work they put in to clean up the camp, they are allotted free time to experience the natural magic of Catalina.

“I mean it is a whole new experience for them. I was just really pleased to see that they all had a good time and grasped the whole experience in its entirety,” said Anderson. “It was really fun to sit back and watch them just love it, especially when they had several hours of free time using the kayaks, paddleboards and jumping off the float out in front of the dock and some kids were fishing and some were doing archery and hiking. To see them all just get as much as they could out of the entire experience was very rewarding and very worth it, I will do it again.”

Anderson and Sunburst are hoping to expand the program in the coming year. The academy’s numbers are expected to jump to 160-180 cadets from the 116 cadets that attended the July- December session, and there are talks of another project for Cherry Valley.

To learn more about the program or to donate to the next trip contact Jeannie Anderson at JAnderson@ocde.us; for more information about Sunburst, see https://www.sunburstadmissions.com/.