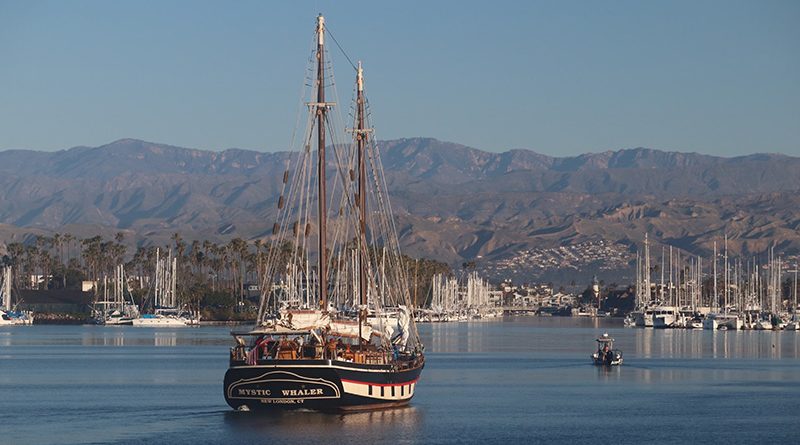 Channel Islands—On Jan. 9 the tall ship Mystic Whaler arrived in Channel Islands Harbor from New London, Connecticut. Soon to be renamed Mystic Cruzar, the ship will serve as an ocean-oriented classroom for central coast youth as well as provide tours to the public.

Montecito couple, Roger and Sarah Chrisman acquired the Mystic Whaler October 2021. The vessel is a 83-foot long, 110-foot tall steel-hulled schooner that has been berthed in Mystic Seaport for the past 54 years.

Once Chrisman’s non-profit “Central Coast Ocean Adventures” is created, educational programs will be offered to local youth as well as public tours in both Channel Islands Harbor and at the Santa Barbara Maritime Museum in Santa Barbara Harbor.

“We are pleased the Chrismans chose our harbor,” said Michael Tripp Ventura County Harbor department director. “The tall ship creates a new visitor-serving opportunity for Channel Islands Harbor, area residents, and the public.” Their goal is to launch the program as early as late spring or summer.

Tripp added that yacht brokers, Bob Nahm of Seacoast Channel Islands and Vicki Van Hook of Seacoast Santa Barbara, worked closely with the Chrismans to acquire the tall ship and bring it to the harbor. The couple have been long time-clients of the Sea Coast brokers.

“This isn’t the first time the Chrismans have created a tall ship program,” said Nahm. “This philanthropic couple have been very involved in other programs like The Spirit of Dana Point program in Santa Barbara and they wanted to add a tall ship to continue their educational offering in both harbors.”

Roger Chrisman first came across Mystic Whaler last winter. Unfortunately, the engine needed a rebuild to be able to complete the long arduous journey from Connecticut to Channel Islands Harbor.

Eventually the engine was repaired, the deal was made and in mid-October when Chrismans brought on board Captain Christine Healey to transit the ship from Mystic Sea Port to Florida. Healy arranged for a crew, (including the previous owners) to sail to Florida. The first leg of the journey took three weeks.

“When we arrived in Florida, we learned the cargo carrier was behind schedule. After three weeks of waiting, the carrier became available to transit the vessel through the Panama Canal then to Ensenada arriving on Christmas Eve. We left for our new home port, but had weather problems to wait out. Finally, two weeks later sailed to Channel Islands Harbor where we docked on Sunday, January 9,” said Captain Christine Healey.

Healy will continue to be the ship’s captain and will play a major role in the youth programs as well as public tours. “I know the Mystic Whaler well as I have worked with the previous owners who ran an educational program on her as well. It feels like home to be onboard her. I am looking forward to getting started with the Ocean Adventures” program.”

The schooner is temporarily docked at the Channel Islands Maritime Museum, where the two tall masts are easy to spot from Harbor Blvd.

“With temporary use permits in place, the vessel may stay in its current location until June 30,” said Nahm. “Once the programs have been developed and the requirements for ease of access, parking, etc., have been determined, we will work with harbor staff to find the best location for the vessel. In the meantime, the ship will continue its regular USCG inspections and certifications to be completed by this Spring before any programs begin.”

According to the official website about the ship, the Mystic Whaler was built in 1967 and rebuilt in 1993, having been modeled after the coastal trading schooners of the 1800s. The Mystic Whaler is not a replica of a whaling ship but is named and painted in homage to the whaling ships of Mystic, CT, the schooner’s original homeport. The vessel has 3,000 square feet of sail and a diesel engine. Below deck are spacious quarters including six bathrooms and hot showers. The ship is US Coast Guard certified for 50 passengers plus ten crew.