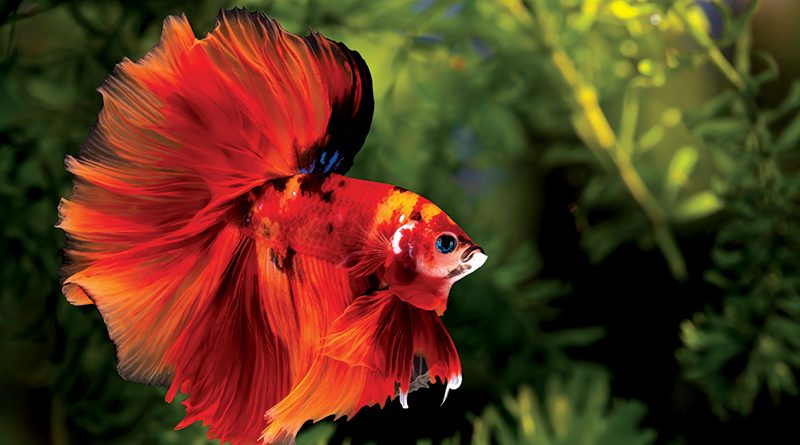 According to PetMD, betta fish can recognize their human guardians and will swim about excitedly when they see their guardian approaching. They are very curious and will inspect new items put into their tank, which can help keep them mentally stimulated. Shutterstock image.

SOUTHEAST, ASIA—In shallow waters of marshes, ponds, and slow-moving streams throughout Asia betta fish, also known as Siamese fighting fish, snack on insects and build bubble nests with their mouths for their young. For centuries, humans have been attracted by the beauty of the betta, their slender bodies and oversized fins move like colorful fabric floating in the water.

However, the betta did not become living art on its own. Instead, the betta’s decorated bodies and long, fluidic fins are the product of a millennium of careful selective dog-like breeding.

“Quite literally the fish equivalent of dog domestication,” said Yi-Kai Tea, a doctoral candidate at the University of Sydney who studies the evolution and speciation of fishes, in a May 14 article from the New York Times.

A new study done by bioRxiv, an open access preprint repository for the biological sciences, hosted by the Cold Spring Harbor Laboratory, conducted in April 2021 shows that through genome sequencing, humans began domesticating bettas at least 1,000 years ago. The bettas were initially domesticated for fighting purposes, very similar to cockfighting culture. The millennium of thorough selection created the dazzling diversity of the domestic betta fish we see in pet stores today. However, that millennium also caused wild and domestic betta fish to be subjected to extensive genetic changes. By studying the genes of the betta fish, the study’s authors argue, scientists can learn a great deal about how domestication alters the genes of wild animals.

“Wild bettas can look very different from ornamental bettas,” said Young Mi Kwon, a researcher at Columbia University and lead author of the study in the New York Times article. “They have short fins, duller coloration, and lack the striking finnage that you can find in ornamental varieties. While it is known that domestic bettas are highly aggressive, fighting each other to the death if put in the same aquarium, wild betta a far less aggressive. This is likely because the ornamental species were initially domesticated for fighting, similar to cockfights,” said Kwon.

Researchers discovered that domestic bettas contradict the genetics of their wild cousins. However, researchers were surprised to find domestic and wild bettas have interbred in past and recent years. This hybridization, likely due to the release of domestic bettas into the wild, could threaten conservation efforts.

There is still much to be learned about how domestication is affecting bettas, but the process has produced plenty of beautiful fish whose bizzare and enchanting colors and shapes may never have existed otherwise.