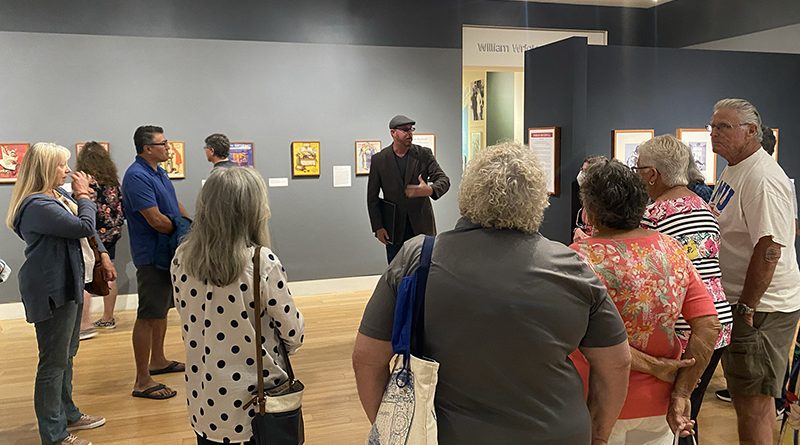 A group of visitors listen to Johnny Sampson, Deputy Director and Chief Curator in the Norman Rockwell exhibit. Image courtesy of Catalina Museum for Art & History

CATALINA ISLAND— The Catalina Island Museum nestled on Metropole in the center of Avalon got its start in 1953 in the basement of the classic Catalina Casino.

“It was basically founded because a group of concerned citizens, and Philip Wrigley, were worried that the island’s history was getting lost and that it should be saved and shared with the people who were coming to visit,” said Gail Fornasiere, deputy director of external affairs.

The museum stayed in the casino for 63 years before finding its permanent home on Metropole in 2016.

The museum offers a large permanent gallery dedicated to the history of Catalina and several other rotating galleries that offer artwork from artists all over the world.

“The great thing about Catalina history is it is so vast and connected to so many things with American history and California history,” said Fornasiere. “There are a lot of firsts and visionaries that were here, and so there are a lot of stories to tell.”

The Catalina gallery is kept fresh with new takes and connections that keep track of the island’s connection to history, and the rotating exhibits find their own place in that story.

One of the current exhibitions is based around the work of Norman Rockwell, an American painter and illustrator, known for his illustrations of everyday life created for The Saturday Evening Post.

The exhibit, “A View of the American Homefront,” focuses on the 1940s through the eyes of Willie Gillis, Jr., a fictional character created by Rockwell, as he enlists in the military and goes through life as a soldier.

As Catalina celebrates the 80th anniversary of its involvement in WW2, Fornasiere thought it was important to acknowledge the island’s involvement and connection which is explained through Rockwell’s work depicting the home front.

From blackouts to USO dances held on the island while soldiers were stationed on Catalina, the museum uses art to connect back to another part of the island’s history.

The museum strives to keep things fresh for island locals and visitors, so they keep coming back to learn about the intricate and vast history of the island, 22 miles from Long Beach, off the Southern California coast.

The museum will feature a couple of new exhibits this fall, including a show of Tongva art created and curated by Tongva artists.

The Tongva were the first people to inhabit Catalina. They lived on the island for at least 8,000 years and have a deep history connected to Catalina.

“We are featuring a few of the artists that are descendants of that tribe who will be showcasing their work in an exhibition,” said Fornasiere. “The three artists that are going to be featured are also guest curators.”

Another exhibition is being added for the history of tiki culture founded on Catalina during film projects like “Mutiny on the Bounty,” released in 1935.

The exhibition, “Tall Tiki Tales; Catalina as a South Seas Island,” showcases the island’s role in the Americanized tiki culture we know today through the transformation Hollywood made on the island to create a Polynesian feel for their films.

“Basically, Hollywood transformed that part of the island [Two Harbors] into a Polynesian paradise for these films, and those films, in turn, inspired restaurants and bars that are tiki related,” said Fornasiere.

According to Fornasiere, the remnants of the tiki feel can still be found in Two Harbors today, and the exhibition will highlight that connection from late October throughout the following summer.

The museum is a cultural center that works to capture the stories of past and future generations to share with the community and visitors.

“We are the keeper of these stories and intend to share those stories with generations down the line so they can relive and connect to the island like they do,” said Fornasiere.