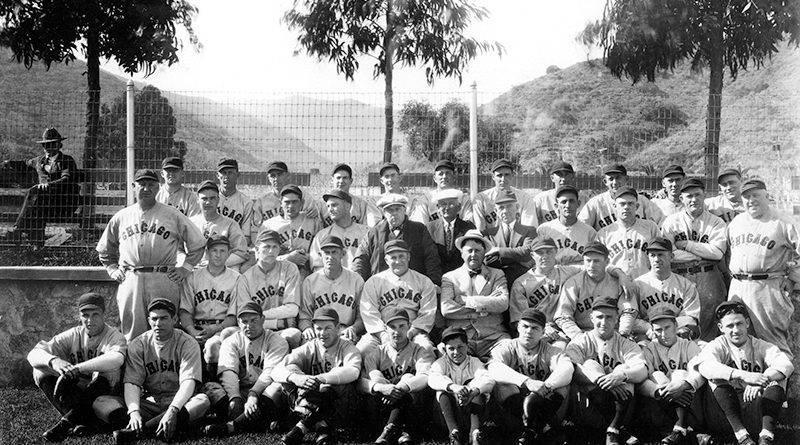 The full team on the island and a proud owner, William Wrigley Jr. Image courtesy of Catalina Museum for Art & History.

AVALON— In the early part of the 20th century, the transition into spring in Avalon became official once some very special guests arrived on the island.

In 1919, 103 years ago, William Wrigley, Jr. and his wife Ada purchased Catalina island. Wrigley, a visionary entrepreneur, quickly grew to love the Island and began investing in infrastructure, hotels, restaurants, and attractions. Wrigley saw the potential in turning the Island into a seaside retreat to attract visitors from around the world.

By the middle of the ’20s, Wrigley built a spring training field that matched the dimensions of Chicago’s Wrigley Field. By the end of that decade, he had also constructed a clubhouse that would eventually become the Catalina Island Country Club.

The team arrived each February to great fanfare, with parades, speeches, and live music. The team was always accompanied by the sports press, showcasing the players’ exploits. One radio sportscaster, Ronald “Dutch” Reagan, who covered the Chicago Cubs on Catalina island, would go on to earn acclaim in a different field.

The Cubs presence was a helpful marketing tool for the island. As the team was photographed throughout their years on the island, those images made their way to newspapers across the United States. Wrigley used the Cub’s presence on the island in advertisements using ‘The Cubs Are Here, You Should Come Too,” as a popular tagline.

The entire country mobilized to fight when the war was declared in 1941, including Catalina Island, which became training grounds and a lookout station for the military. Throughout the years of the war, the Cubs stayed closer to home, but as soon as the war was over, spring training returned to Catalina island. The team continued to train on the Island until 1952, when Mesa, AZ, was chosen as the team’s new training ground.