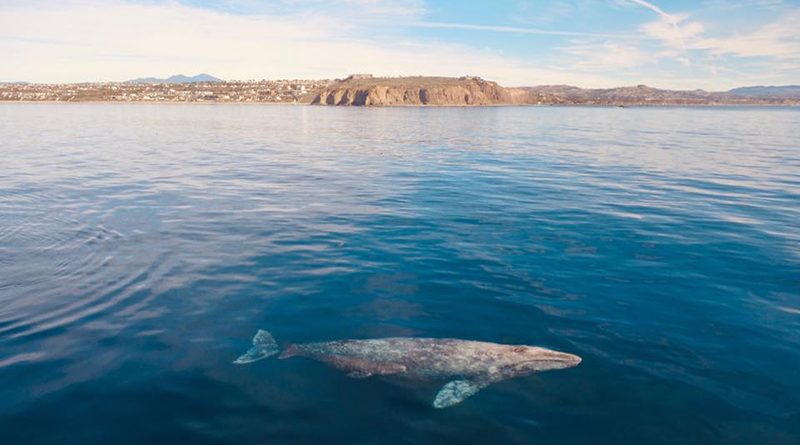 Imagine what life would be like traveling from the Bering and Chukchi Seas all the way to Baja Mexico, and maybe adding a few miles if you decide to start a little bit further north towards the North Pole because the food is better? That’s clocking in between 5,000 to 7,000 miles one-way, all to enjoy a warm swim in the Mexican lagoons where gray whales will continue mating, calving, nursing, and socializing.

It’s an amazing concept if you think about the life of the official California Marine Mammal, the California gray whale. The whale will migrate from north to south and back again, enduring many hurdles, including boats, predators, and massive weight loss from fasting.

Gray whales have a different body shape than those of rorqual whales, such as the blue, humpback, and minke whales. This affects the way they eat and travel. It’s almost like comparing a hybrid to a gas-guzzling vehicle averaging a loss of one gallon of fatty lipids for every 16 miles traveled.

The gray whale’s shape and lack of multiple ventral grooves do not allow them to pull in large amounts of water like the humpback or blue whale while feeding.

The gray whale gets their food as bottom feeders; they focus on amphipods, small shrimp-like organisms that live in the mud, as well as mollusks and tube worms. They get fat and happy, creating large reserves of fatty lipids in the Bering Sea as they can’t eat as they travel along the coast to their final destination of Baja.

They are unique in growing their population while mating during their travels. The female ovulates in November, allowing for conception during her south-bound migration; if unsuccessful 40 days later, she will have her second and last ovulation of the year, which would have her mating in the lagoons.

Fifty percent of gray whales will be born north of Los Angeles with a gestation of 12-13 months during their annual migration.

This is why we see numerous calves traveling southbound in waters off Southern California. The average calf will nurse for 6 to 8 months, with fatty lactation being the most important in the first 5 to 6 weeks. This creates a build-up of blubber and fat protein to keep them warm, as it is hard for them to regulate their internal temperature during their migration back to the cold-water temperatures of the Bering Sea. In addition, it gives them energy and strength to make the 5,000-mile trip to the Bering Sea with their mother. A calf averages 12 feet in length at birth and will grow at a rate of two pounds an hour, gaining up to 48 pounds a day. The average calf leaves the lagoons with its mother at 18 feet in length.

I think people forget how unique the gray whale is, and we are pretty darn lucky here in Southern California that we are able to experience these “friendly whales” as they migrate from November to April along our coastline, peaking in our backyard off the coast of Dana Point in February and March.

Dana Point is a landmark for whale sightings due to its weather, underwater canyons, shallow waters, large kelp beds, and the close proximity of continental shelf, which creates the “perfect navigational highway,” allowing us to have close accessibility to see the gray whale in its natural state. However, their migration is different than any other by how they travel close to our shore, adding 3,500 extra miles to the already long adventure.

In California, we have judicial guidelines to keep these beloved creatures safe; we honor their space with a safe distance just like you would a fire engine with its lights and sirens on…PULLOVER and create space behind and do not cross paths intentionally in order to protect them.

They were once hunted to near extinction in the mid-1800s and again in the 1900s. They became overhunted in Southern California and Mexico. They were once called the “devils’ fish” as they became aggressive once they knew they were in unfriendly waters during the whaling period.

The history of how they were hunted is not a history we want to repeat as it is one of the natural wonders of the world to see the way the mothers and calves interact in the Mexican Lagoons. They allow us to touch and kiss their young, living up to the name “friendly whales.”

Come wave hi to them aboard a Whale and Dolphin Watching Adventure with Dana Wharf Whale Watching as they play along our shores here in Dana Point, California. The Dolphin and Whale Capital of the World ®

Captain Todd Mansur has had a career on the ocean for the past 32 years with Dana Wharf Whale Watching. Through a variety of experiences, he has had the opportunity to observe hundreds of marine species, both fish and mammals. He is the Director of Marine Mammal Education Programs, A Certified Marine Naturalist, American Cetacean Society, and Board of Directors, Gray Whale Foundation. For more information: www.danawharf.com and https://graywhalefoundation.org/