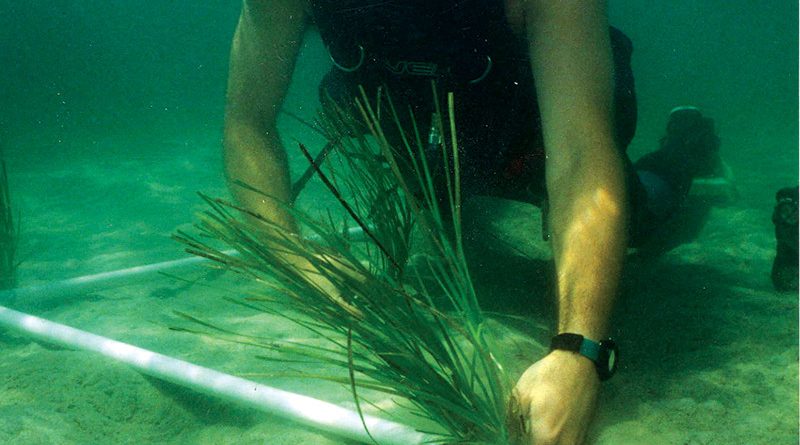 The cooperative one-year agreement will take a look at how eelgrass stores carbon and how it can support the efforts to mitigate greenhouse gas emissions.

“Eelgrass is an extremely important habitat in San Diego Bay it is kind of the base of the food chain,” said Eileen Maher director of environmental conservation and aquaculture blue technology program.“…It is a native habitat throughout the northern hemisphere it is definitely the base of the food chain but also helps with clean water quality…we are studying it now because of the potential to sequester carbon out of the atmosphere which helps reduce greenhouse gases.”

San Diego Bay supports 17 percent of all eelgrass in the state and half the eelgrass found in Southern California, current literature suggests the eelgrass can hold up to four times more carbon than terrestrial plants, making it a huge benefit to the atmosphere and the future of mitigating carbon emissions in the port, according to Maher.

The study will take core samples from roughly forty locations in the bay in both Navy and Port property taking into account the different habitats available in the bay.

Maher said that the initial agreement with the MARAD was for $500,000 but with the first installment of $150,000 the Port is hoping to establish a baseline and then continue to go back over time to do additional testing and establish an accurate record over time.

Maher said that the project fits in well with other established Blue Economy Incubator Projects like ECOoncrete, which installed a series of interlocking tide pools in January of this year using an environmentally sensitive low carbon concrete mixture tailored for the San Diego Bay marine environment and serves as a potential replacement for riprap.

“This melds right into our incubator projects,” said Maher. “…We are looking at projects that have a lot of multiple co-benefits, our projects like ECOncrete, where we are able to show that if we can take out the hard surface structure and replace it with still a hard structure but mimic the tide pool it brings in different animals and different muscles and algae. It is providing that environmental benefit.. and so if the eelgrass project is sequestering a lot more carbon than we think it might be which would be great and it will help us limit our emissions in the bay.”