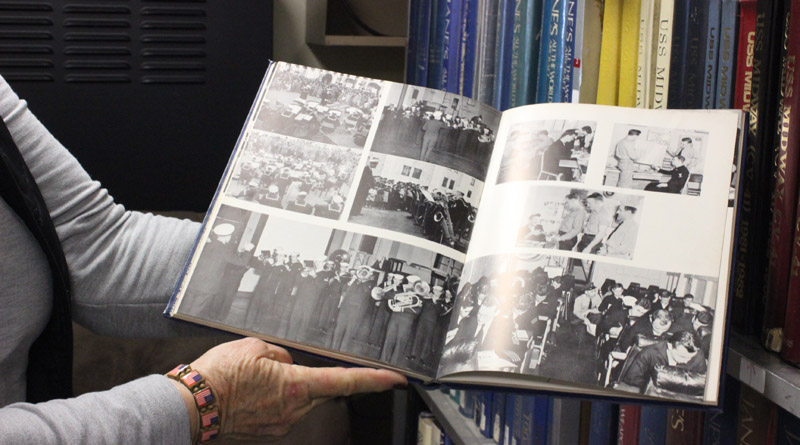 The Midway’s library has copies of every cruise book for the ship, which records all deployments and missions dating back to 1946. Jordan B. Darling photo.

The USS Midway is looking for volunteers to join their ranks; whether it is story-tellers, safety officers, restoration, or in the library, volunteers are the backbone of the museum.

SAN DIEGO一 Museums are often learning tools; throughout the early years of education, kids are loaded up onto yellow buses and driven to tall, imposing buildings full of artifacts, and history which can be difficult concepts to grasp when out of context.

Take a museum, keep it in its original context, for example, a carrier floating in San Diego Bay, load it with knowledgeable volunteers and interactive exhibits, and you have a fan favorite that sees between a million and two million guests a year from around the globe.

Walking on the USS Midway Museum is stepping back in time to a piece of naval history preserved in its 1992 state.

Volunteers are posted throughout the ship with colorful hats identifying them as docents and the safety team who are out in front of guests, and behind the scenes volunteers in the airwing and the restoration department who are working to preserve the ship to continue telling its story.

Your tour takes you to different parts of the ship where men and women are posted with brightly colored yellow hats, a smile, and a story you’ve never heard.

“Yellow hat means I am a tour guide and a teller of stories,” said Jim Reily, docent program director. “Sea stories are like fish stories; they keep getting bigger and bigger by the end.”

The stories are phenomenal but true, the history is tangible, and the volunteers make up most of the team with life stories mixed with a good dose of training.

There are currently between 700 to 800 volunteers who come in to give their time to the Midway each month.

“The volunteer program is the backbone of the museum,” said Laurie Switzer, director of Volunteer Programs at the USS Midway Museum. “The volunteers make up the majority of our team…Our regular volunteers cover assignments in almost every department of the museum, so behind the scenes and certainly frontline ambassadors.”

These volunteers work in everything from the docents who guide guests throughout the ship, sharing stories about the aircraft carrier, to the airwing who spend their time restoring aircrafts on the ship and in a restoration facility on North Island in hangar 805.

The Midway is a unique museum; preserved in its 1992 state, the ship offers an inside look at the operation of an aircraft carrier, allowing guests to explore the ship on their own with docents placed along the way and the option of audio tours.

The Midway was commissioned on Sept. 10, 1945. The carrier featured an armored flight deck and an air group of 120 planes, making it the first of a new three-ship class.

The ship didn’t see service until 1946 when it became the first American carrier to operate in the midwinter sub-Arctic.

It served in the Atlantic Fleet for ten years and had its first combat deployment in 1965, flying strikes against Vietnam.

In 1975, the Midway served as an evacuation point during Operation Frequent Wind, taking in over 3,000 refugees from the fall of Saigon.

The ship was sent to Japan, becoming the first American carrier ported aboard, and in 1990 the Midway deployed to the Persian Gulf, serving as the flagship during Operation Desert Storm.

The Midway’s final mission was the evacuation of civilian personnel from Clark Air Force Base in the Philippines after the eruption of Mount Pinatubo.

The ship was decommissioned in San Diego in 1992 and was donated to the San Diego Aircraft Carrier Museum organization in 2003, opening up at the USS Midway Museum in 2004.

The Midway has volunteers placed in several departments throughout the museum; volunteers are trained in their specific departments, opening up the opportunity for new experiences.

“I am speaking specifically for docents; we will be able to educate them so they are as knowledgeable about an aircraft carrier as a sailor who spent 20 years in the Navy,” said Reily.

Apart from the training that goes into a volunteer’s position, with anything, the key is to have fun and enjoy what you do.

“We want to make sure that they are having fun because if they are, that is almost kind of contagious to guests that come aboard,” said Reily. “…They [volunteers] can expect to have support no matter what their background is.”

Departments are extensive and offer opportunities for volunteers in a lot of capacities. In addition, the Midway boasts an extensive curatorial department and research library. They are working to create a master list of every sailor who served the Midway and record the ship’s history.

The library utilizes records such as cruise books, muster lists, any public documentation to record a comprehensive history of the ship.

Families can also come in and seek records for family members who have served on the Midway but might be lost to time.

“This is for people that come in and want to look up a relative,” said Nancy Smith, a library volunteer working on the master crew list. “This is the gentleman we were talking about. He was in the brig, anyway; his son came in and wanted me to look him up. So, we look them up, and if we have them in our crew list, this is the information that we can give him. This is where we found out he was placed in confinement for 20 days and given hard labor… We get all of our information from the cruise books, officers’ roles, [and] muster lists. The Navy does not give us the information, so it has to be garnered like this.”

The library has been a part of the Midway since the museum’s conception in 2004.

Volunteers come in from every profession and background, from previous military members, schoolteachers, or retired medical personnel, they all find a place aboard the Midway.

“I had retired in 2007, and a friend of mine said they have a library at the Midway,” said Bonnie Brown, volunteer librarian. “…I had been a charter member of the USS Midway when it came…So I came down here, and at the time, there were only four other people volunteering in the library. I think I became number five or number six.”

Brown is a retired librarian who is one of four volunteers in the library with a master’s in library science. Brown is one of many volunteers who found themselves on the Midway with the ability to use their skills.

“People come and feel good about themselves, and what their contributions have been to the freedom and defense of the country, so it is nice to share that with folks,” said Reily.

The USS Midway is accepting volunteers in most of their departments. For more information, see the Midway website at: https://www.midway.org/give-join/volunteers/volunteer-opportunities/#DOCENT_TOUR_GUIDE.