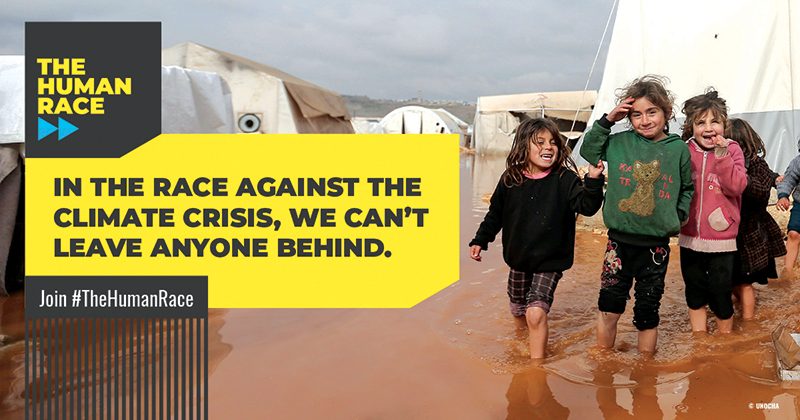 The global challenge is to raise awareness for climate change and encourage solidarity and action with the world’s most vulnerable communities.

NEW YORK一 The United Nations Office for the Coordination of Humanitarian Affairs announced the launch of #TheHumanRace, the World Humanitarian Day race, on Aug. 2. The global campaign is spotlighting the dangers of climate change, its effects on marginalized communities, and encourages governments around the globe to commit to fighting climate change.

“With over 88 million athletes in 195 countries, the Strava community has the power to unlock solutions to some of the world’s most critical problems. That’s why we invite athletes and people everywhere to join this challenge to raise awareness of climate change and its disproportionate impact on marginalized communities,” said Michael Horvath, Strava CEO, in an Aug. 2 press release.

Participants around the world are encouraged to log 100 cumulative minutes of either walking, running, swimming, cycling, or any sport of their choice on the Strava website between Aug. 16-31 to mark World Humanitarian Day on Aug. 19.

World Humanitarian Day commemorates humanitarian workers who were killed or injured while they were working, it was designated in memory of an Aug. 19, 2003, bomb attack on the Canal Hotel in Baghdad, Iraq that killed 22 people.

The day was formalized as a world remembrance day by the General Assembly in 2009.

For those that cannot participate in the race, another option is to sign a pledge on the #TheHumanRace website that will call on countries to fulfil a 12-year-old pledge to provide $100 billion a year for developing nations to respond to climate change and support climate adaptation.

The race comes a couple of months ahead of the UN Climate Change Conference set to be held in Glasgow, Scotland Oct. 31 through Nov. 12.

António Guterres, secretary-general for the UN calls 2021 the world’s ‘make-or-break year’ and is calling for “a major breakthrough” to slow the pace of climate change and build resilience to protect the most vulnerable from increasingly severe and frequent climate impacts.

The press release states that the activity will aim a spotlight on the global impacts of climate change, prolonged droughts, extreme and intensified weather events, and horrific flooding unless there is a major breakthrough before COP26.

“​​The climate emergency is a race we are losing, but it is a race that we can win,” said Guterres, in the Aug. 2 press release.

Several organizations and professional athletes like Olympic silver medalist Francine Niyonsaba, and climate activists like Adenike Oladosu of Nigeria and Mitzi Jonelle Tan from the Philippines, have pledged themselves to participate in the event.

“I am excited to run for the most important goal in our lifetime: to save our planet and the people living on it,” said Fernando Maciel, a world-class ultramarathon athlete, in the Aug. 2 press release. “We run every day, for ourselves, why not run for something bigger? Everybody should join #TheHumanRace because we need compassion and it is time to run together.”

According to the UN, climate-related natural disasters, like floods, droughts, and heatwaves have doubled in the past 20 years and have had the strongest impact on developing countries and marginalized communities.

To participate in #TheHumanRace by taking the Strava challenge of 100 minutes between Aug. 16-31 see https://www.strava.com/challenges/The-Human-Race.