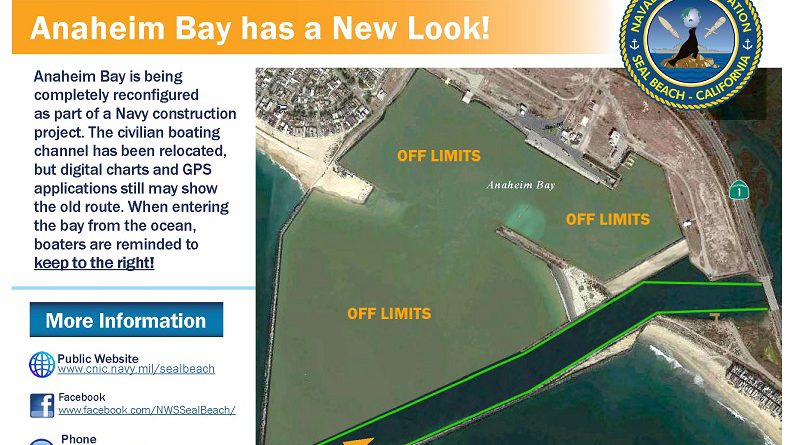 In order to create the new pier, the Navy blocked off the old access channel and created a new channel to the south of the bay and prohibited access. Image courtesy of Naval Weapons Station Seal Beach

Anaheim Bay is undergoing a renovation and has already seen a new public access channel and is going to see a new ammunition pier within the next two years.

SEAL BEACH— The Naval Weapons Station in Seal Beach has started the next phase in the Ammunition Pier Project by undergoing the six-month process of creating the concrete deck for the new pier.

Anaheim Bay is going through a five-year project to restructure the bay to build a new ammunition pier for the Naval Weapons Station.

The current pier was built in the 1950s and doesn’t meet current safety codes or operational standards.

The old pier must be kept in operation throughout the project as the ammunition station is the nearest base to San Diego. The next closest ammunition loading station is located 50 miles from the Canadian border.

To build the new pier, the station had to relocate the pier to the middle of the bay to keep the current pier operational. The first step in the project was to build a new public access channel connecting Huntington Harbour to the Pacific.

The public access channel was completed in early 2021 and granted public access while allowing the Navy to cordon off the rest of the bay for construction and further operations.

In December 2021, the station held a pile driving campaign which finished in April 2022, a couple of months ahead of schedule.

Six hundred and sixty  concrete piles were driven into position to support the new pier structure at the center of the bay.

The next step is to conduct 16 pours of concrete in a wooden frame to create the concrete deck for the new pier.

“The project remains on track,” said Smith. “We are currently in the process of pouring concrete for the new ammunition pier deck, and that is going to require a grand total of 16 pours, about one every two weeks. We started a little over a month ago on that. I think we are on our fifth pour.”

Smith predicts that for the next six months, the builders will continue to pour concrete into the wooden structure, moving forward in sections to create the finishing piece of the pier.

Smith does remind boaters that the channel is the only thing open to the public. When coming into the channel from the ocean, make sure to stay to the right and follow the southern most jetty, which will take them to the harbor.

“The entire intersection of the harbor is now a big construction zone, so basically, we just want all boats to keep out of the portion of the bay except for that new channel,” said Smith.

The previous boating channel cut across the inner harbor and went through the bay’s center before boaters turned to go out into the ocean.

The area is permanently off limits, and the Navy has put up signs to guide boaters in the correct direction.

The weapon’s station website predicts the pier will be completed by the end of 2024, concluding the construction project.