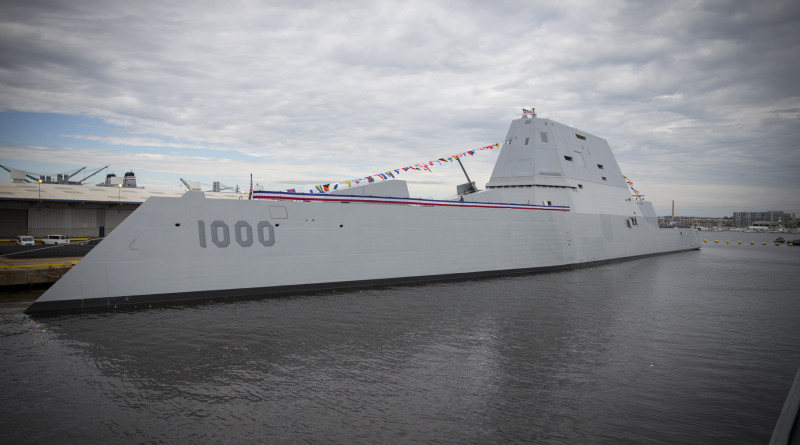 The future Zumwalt-class guided-missile destroyer USS Zumwalt (DDG 1000) is pierside at Canton Port Services in preparation for its upcoming commissioning on Oct. 15, 2016. Zumwalt is named for former Chief of Naval Operations Elmo R. Zumwalt and is the first in a three-ship class of the Navy's newest, most technologically advanced multi-mission guided-missile destroyers. (U.S. Navy photo by Petty Officer 2nd Class George M. Bell/Released)

“It’s the first of a kind that’s leading the way for new classes of ships, new capabilities that are in ships, new systems that we can use and it just expands the things we can do and the ways we do it,” Mabus said after the ceremony.

Zumwalt is scheduled to begin her transit to San Diego, where she will be home-ported at Naval Base San Diego, making several port visits along the way.

Upon arrival in San Diego, which is scheduled later this year, Zumwalt will begin installation of her combat systems, testing and evaluation and operational integration with the fleet, the Navy said.

The U.S. Navy continually monitors force readiness and ability to provide the most robust, capable maritime force possible, the Navy News Service said in a release. Stationing destroyers in a West Coast port supports rebalance of the Indo-Asia-Pacific region, placing our most advanced capabilities and greater capacity in that vital theater. By 2020, approximately 60 percent of Navy ships and aircraft will be based in the region, according to the release.

With 147 officers and sailors, Zumwalt’s crew is the smallest of any destroyer built since the 1930s, thanks to extensive automation. All sailors are cross-trained, and there’s more sharing of tasks on Zumwalt. Sailors have staterooms, instead of bunkrooms with dozens of people in them. “So, when they wake up, they wake up to only one or two alarm clocks, not four, not 50,” Capt. James A. Kirk, commanding officer of Zumwalt, said.

The ship is named after the late Adm. Elmo “Bud” Zumwalt, who earned the Bronze Star in World War II and commanded small boats that patrolled the Mekong Delta in the Vietnam War. He became the youngest chief of naval operations and earned a reputation as a reformer who fought racism and sexism. “He changed our Navy in massive ways, some to make the fleet a more potent fighting force, but most importantly he reformed the institution of the Navy to be more just and fair to all its sailors, making sure that all sailors regardless of race, creed, color, faith, had an opportunity to serve in whatever capacity that their heart and their passion desired to,” Kirk said.

The 610-foot warship is sleek, with an angular shape to minimize her radar signature. It looks like a much smaller vessel on radar. Quieter than other ships, Zumwalt is hard to detect, track and attack. A composite deckhouse hides radar and other sensors. Its powerful new gun system can unload 600 rocket-powered projectiles on targets more than 70 miles away.

Its unique capability to generate 78 megawatts of power, enough to power a small- to medium-sized city, could be used in ways perhaps not even envisioned yet, such as in the testing and use of laser and directed-energy weapon systems, Kirk said.

If Batman had a warship, it would be USS Zumwalt.

That’s how Adm. Harry Harris, commander of the U.S. Pacific Command, described Zumwalt — the Navy’s largest and most sophisticated new destroyer, which comes with a price tag of at least $4.4 billion.

Kirk rolls with questions about his sharing the first and last name of the fictional captain of the Starship Enterprise, telling reporters to “live long and prosper.” But he says his parents named him after his grandfather, not Capt. James T. Kirk of “Star Trek.”

“I have interrogated them about this a great deal — more over the last couple of years than before — and they tell me, no, it was all about my grandfather,” Kirk said.

2 thoughts on “US Navy’s stealth destroyer joins fleet, will homeport in San Diego”