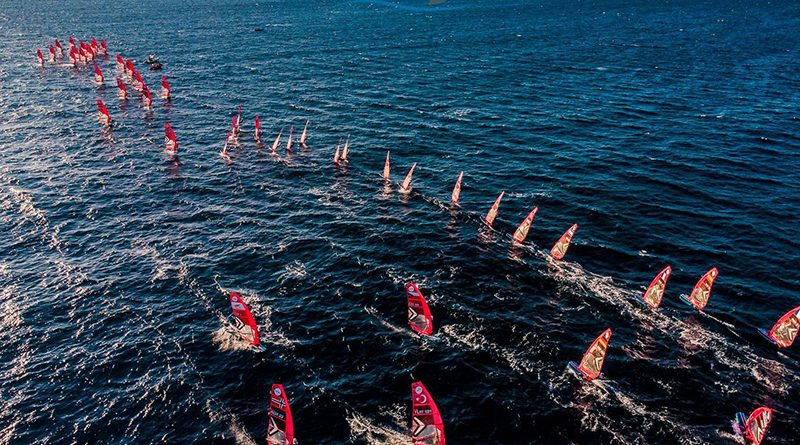 The iQFoil European Championships were held in Marseille, France, the location for the 2024 Olympic Games. Photo by Sailing Energy

MARSEILLE, FRANCE一 The iQFoil European Championships wrapped up on Oct. 28 with three U.S. athletes competing against racers from Europe, Asia, the Middle East, and the Americas. The U.S. may not have placed high this championship, but the athletes are in good spirits and continuing to look forward to the next events for the team.

This was the first international event for the USA iQFoil athletes since the equipment’s official Olympic designation earlier this year.

“The European Championships were great fun and a great learning experience,” said Alex Temko, the U.S. male representative at the inaugural Junior Pan Am Games set for Cali, Colombia Nov. 26- Dec. 5 in an Oct. 29 press release from US Sailing. “I learned a lot about the Olympic venue and got to see the level of the fleet.”

Temko placed 94 out of 140 athletes in the overall rankings for the event.

Temko told US Sailing that he took several lessons from the event and will use them in the upcoming Pan-Am Games.

“I worked on switching from a racing mode to a relax-and-recovery mode,” said Temko in the press release. “I practiced my high-performance tactics and had plenty of opportunities to lock in my full speed on the reaches.”

Fiona Wylde is a recent addition to the iQFoil team and placed 59th out of 68 competitors in the women’s open division. This is Wylde’s first international iQFoil event. Wylde is a three-time Stand-Up Paddleboard World Champion.

“I have really enjoyed being here and learning as much as I can,” said Wylde in the Oct. 29 press release. “Foil Windsurf racing is new to me, so I am proud of the way I sailed for the amount of experience I have and am really motivated to improve. Onwards and upwards!”

The iQFoil athletes are competing in the 2021 Gulf Championships (Open Windfoil and IQ Foil Nationals) which began today and will continue through Nov. 14.