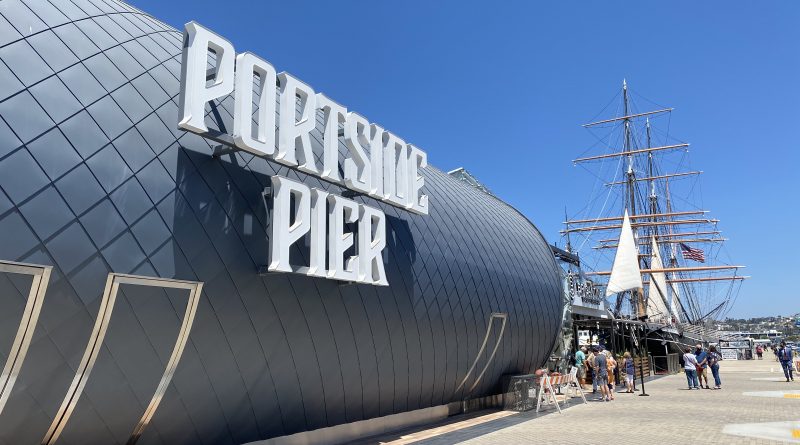 Quartet of restaurants on the bay pays homage to city’s fishing history, while also hoping to turn heads and offer something for everyone.

SAN DIEGO—Change is never easy. Sometimes the arrival of something new – especially if that something new replaces a piece of long-standing history – can often be met with hesitation, stink eye or rejection.

The arrival of Portside Pier, a quartet of restaurants officially open for business on the Downtown San Diego waterfront, has certainly been met with some resistance and non-acceptance. What used to be standing here – Anthony’s Fish Grotto – certainly had a loyal fan base. Portside Pier, in comparison to Anthony’s Fish Grotto, is the shiny new object lacking in substance and attractive only to the hip and the swanky.

The Unified Port District of San Diego, of course, viewed this prime piece of real estate differently. Antony’s Fish Grotto’s 66-year lease was on the verge of expiring a few years ago, and port district staff wanted to give others a fair shot to pitch what they could do on Downtown San Diego’s upper waterfront. The city, after all, has changed dramatically since the 1950s, when Anthony’s Fish Grotto was establishing itself as a go-to seafood dining establishment on San Diego Bay.

Port district staff sought proposals for a redevelopment of the Anthony’s Fish Grotto site about five years ago. The port district received 20 submissions in response. The field was first narrowed to six, then to three. Each of the three finalists were local developers. Awarding the bid to a developer with ties to San Diego was important to the port district.

Also important to the port district: revenues. Wendy Siao, the port district’s program director, said the Port of San Diego isn’t tax-funded, so whoever won the bid to redevelop the Anthony’s Fish Grotto site would have to demonstrate it could implement a successful revenue model.

Any winning bid would also have featured a gamut of public benefits, Siao added. Those public benefits came in the form of a dine-and-dock feature, top deck viewing area and public walkways around the perimeter of the building.

“It’s such a unique location, with a restaurant over the water,” Siao said of Portside Pier. She added the port district is making every effort possible to incorporate dock-and-dine opportunities on San Diego Bay, in order to “facilitate the waterfront experience.”

Brigantine ultimate won the contract to build out a restaurant concept at the Anthony’s Fish Grotto site. The restaurant operator pitched Portside Pier as a four-venue destination: Brigantine on the Bay, a seafood restaurant; Miguel’s Cantina, a Mexican restaurant; Ketch, which offers pub fare; and, Portside Coffee, which offers coffee and gelato.

The 90-foot dock-and-dine dock could accommodate up to four boats at once (on a first-come-first-served basis), and there is a second-level perimeter walkway, which is open to the public. Also upstairs: an open-air viewing deck, which has tables and seating for as many as 108 people.

The Log visited Portside Pier on Aug. 6, just before the lunchtime rush. Introducing Portside Pier to the public during a pandemic might seem risky, but three of the restaurants (Brigantine, Miguel’s and Ketch) already had a waitlist for seating by 11:30 a.m. Capacity was reduced due to the pandemic, of course, so demand was destined to outpace supply early on, especially on a sunny and pleasant summer day at a busy section of Downtown San Diego (Portside Pier is located next to the Star of India and across the street from a big brand hotel, so foot traffic in the area is certainly aplenty.)

Mike Morton, Jr., the CEO and president of Brigantine, Inc., told The Log the very design of his restaurant, which sits on the northside of Portside Pier, made it a little easier to open despite the Covid-19 pandemic.

“We’re really blessed here with a lot of outdoor space. This dining room opens on three sides,” Morton told The Log during an interview inside Brigantine on the Bay, jokingly adding no one knew a health pandemic would coincide with Portside Pier’s opening when Brigantine, Inc. pitched the restaurant concept about five years ago.

Morton added his team at Brigantine, Inc. wanted to create something local San Diegans could appreciate.

Portside Pier’s design also paid tribute to San Diego’s fishing culture, Morton said. The design on the north and south ends of the Portside Pier building represent fish baskets. One fish basket is Norwegian in design, while the other is Scandinavian.

The zinc shingles in the middle of the building, where you’ll see the large “Portside Pier” sign, represents a fisherman’s net.

Portside Pier is located at 1360 North Harbor Drive in San Diego. The restaurant venue was allowed to open “under the latest state and county health guidance for restaurants.”