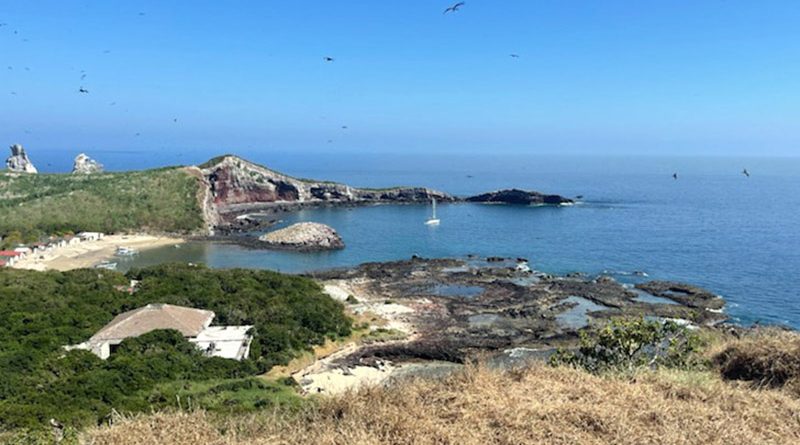 Isabel South Cove: The better anchorage is in South Cove, where a dinghy beach is available in the eastern lobe below the pangueros’ huts. University’s students study each frigate nest from their observatory, lower left. Las Monas are 200’ spires rising beyond Isabel’s east shoreline, upper left. (photo credit Kim Paulsen)

Mexico boaters will encounter both these unusual avian species at Isla Isabel, a tiny island 15 miles off the low-lying coast of Nayarit state.

Isla Isabel is a National Park, Biosphere Reserve, and wildlife sanctuary protected by park rangers, so bring your SEMARNAT passports.

Boaters can usually anchor in one of two places and launch the dinghy to go ashore to hike the trails and see the abundant wildlife. Thirty visitors are allowed on shore at a time, but no pets. Pangueros keep seasonal huts above the south end beach.

Isla Isabela (about a mile-long and 314 feet high) has no services for visitors and is a fair-weather-only anchorage, so be ready to up anchor and move on if conditions require. It’s best to think of Isla Isabel as a fantastic stepping stone while coastal cruising, not a long-term stay.

Two popular spots to drop the hook are, inside or just outside the small South Cove, which has rocks but generally better holding, or you may anchor almost all the way around Las Moňas, the two 200-foot-tall rock spires rising off the island’s southeast side. The sand bottom here is generally thin over slippery rock. Moňas means mannequins or dress-maker forms.

Jacques Cousteau, the famous nautical explorer, was first lured to this volcanic speck 40 years ago, when he and his crew, aboard their research vessel Calypso, came to study and film the unusual mating habits of the island’s huge and majestic frigatebirds (Fregatidae).

Mariners crossing the South Pacific had long told tales of the magnificent Frigatebirds and their long-distance flying abilities.

In colloquial Spanish, both male and female frigatebirds are called “Ave Tijera” or scissors birds, because while maneuvering in flight they deeply fork their huge tail feathers like an open pair of scissors. It’s hard to tell when you’re looking up, but it has a seven-and-a-half-foot wingspan, and relative to its body weight, it has the largest wing-surface area of any bird on earth. Surprisingly, this sea bird can’t swim; it can’t even land on water or its water-logged feathers would soon drown it.

But at Isla Isabel, Cousteau focused on how frigatebirds lived and loved on land.

During mating season the male attempts to attract a mate by inflating his throat sack into a huge brilliantly red balloon that he swings around brashly, a dramatic display against his glossy black plumage. Further, the enamored male frigatebird uses his long-hooked bill like a drum stick to thump loudly on his red balloon – perhaps to serenade a potential mate.

Female frigatebirds are larger than males, distinguishable by their white chest feathers and brownish bodies. On Isla Isabel, both mates work together to build their rather crude brooding nest in the island’s stubby trees only 10 to 15 feet high. When an egg hatches into a fluffy white gosling, the pair takes turns flying out a mile or two to catch fish or squid, then returns to land awkwardly in their tree and feed the squawking young. Frigatebirds don’t dive, but they’re adept at fishing at the sea surface, and you’ll see they’re just as good at stealing fish from gulls and boobies.

Turns out, tiny Isla Isabel lies on the northern edges of the frigatebirds’ vast Pacific mating grounds, so mariners heading south, and west will probably see more of them in the skies.

Scientists from around the world send teams to study the frigatebirds and boobies from the observatory and camp built by Guadalajara’s UNAM Institute of Ecology on Isabel’s southwest corner. Don’t disturb their belongings as you pass by.

Yup, their flat webbed feet are definitely blue, not tan or red like their cousins.

When you step ashore on Isla Isabel, please be observant not to accidentally kick or step on a blue-footed booby egg. The birds lay one to three eggs directly on the ground, maybe in a shallow depression in the arid soil, or in a patch of rocks or dry grass, possibly ringed by feces. Sometimes their almost imaginary nests are right next to one of the many dirt hiking trails on Isla Isabel.

The blue color of those big webbed feet (patos in Spanish) are a sexually selected trait; the brighter blue the better, it appears. Both males and females lift and display their feet one at a time to each other as part of the complex courtship dance. Once mated, boobies sleep together on the nest at night, then take turns incubating eggs and fishing to feed their hatchlings.

Boobies are spectacular divers. The slightly larger adult female is capable of diving straight down from 80 feet at 67 miles per hour. Even from your boat, you may witness flocks of 10 or more boobies rocketing down into a school of sardines, mackerel, or squid. They surface and usually fly straight back to feed their baby boobies on shore.

An estimated 90,000 blue-footed boobies (Sula nebouxii) are presently mating along Mexico’s Pacific coast from Isla Isabel down to about the latitude of Acapulco. The other large population is found in the Galapagos Islands.

Some older charts label this Isla Maria Isabel. It was once considered part of the Marias chain of islands located 35 nautical miles further southwest. (Mexico Report looked at the Isla Maria Madre a few weeks ago.)

Volcanic activity obviously formed this island, as it did all the Marias Islands. Isla Isabel’s geology is spectacular. The whole island consists of several volcano cones composed of cinders and tuff or compacted ash, and they’re connected by unique lava flows. That includes one relatively young flow on Isabel’s northeast side that was active as recently as 11,700 years ago, according to Jim Luhr of the Smithsonian Institute’s Museum of Natural History’s Volcanism Program.

Wave action has eroded some cones to expose distinct buried layers of red and yellow rock, as seen in the tall north wall of South Cove, or in the sheer cliffs and tilted lava beds on Isabel’s northeast corner. Or the white cone remnant that is Islota Pelon, meaning bald in Spanish.

The only small beaches where it’s easy to land a dinghy are in the eastern lobe of South Cove and on the island’s longer east shoreline closest to Las Moňas. Those twisted spires themselves look like they were blasted straight up out of a fierce volcano and landed splat where they stand today.

May you enjoy your stop at Isla Isabel.