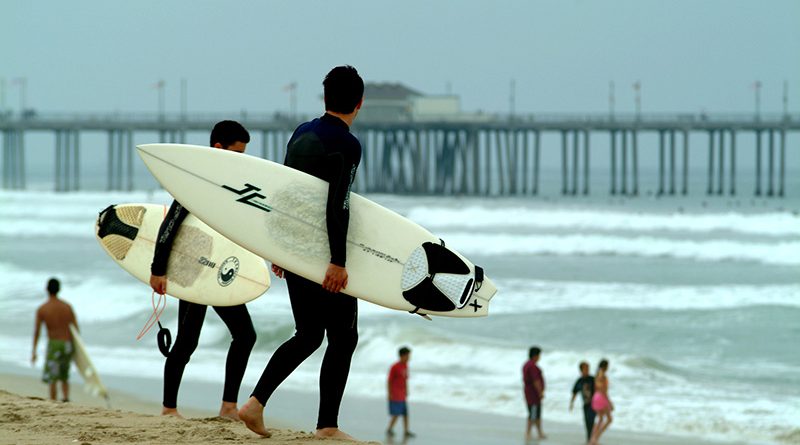 The best time of year for surfing Huntington Beach with consistent, clean waves is during Winter and most often the month of January. Shutterstock image.

Huntington Beach surfing was made famous because of the consistency of its waves and has remained a staple SoCal location for surfers for more than 100 years.

HUNTINGTON BEACH — Huntington Beach, affectionately known as “HB,” has another well-earned nickname, Surf City USA. Huntington Beach offers 10 miles of sandy beaches and consistent breaks and hosts more than 50 surf contests each year, including the infamous US Open of Surfing. Surfers have sought out these conditions for over 100 years and today, surfing in Huntington Beach is on many surfers’ bucket lists.

According to surf historians, Huntington Beach was first surfed in 1907 by Hawaiian waterman and surfing pioneer George Freeth. In 1925 legendary surfer Duke Kahanamoku came to California from Hawaii and popularized the sport of surfing in Huntington Beach. Having the legend surfing the shores of Southern California generated new visitors and the need for accessible surfing equipment. As a result, the city’s first surf shop, Gordie’s Surf Boards, opened in 1953, and six years later, the first US Surfing Championships were held in Huntington Beach.

The waves twist around the iconic Huntington Beach Pier and have breaks going north and south, which will work in different swell directions. They peel across the beach on one side but also deliver those death-defying rides through the wooden beams if you feel brave enough to take on the disappearing act as you surf through them.

Surfing in HB is year-round. The pier’s south side rides better in the winter because the northwest swell direction drags under the wooden pilings to gather and shape. It then wraps around the pier and forms the sandbanks to create a slabby wave with a “rippable” open face. The shape holds nicely and is very consistent, mainly due to a phenomenon known as the pier bowl, a specific arrangement of sandbanks that occurs at jetties offering consistent waves that angle beautifully in a sort of semicircular motion as they head towards the beach.

In the summer months, the south side of Huntington Pier is often blackballed, so the crowds move to the more reliable north. The wave is generally a high-performance playground with shortboards in abundance. The north wave is noticeably shorter but tends to hollow out much faster than the south. That’s why it’s often the go-to option for short boarders.

Shortboards have become the popular board of choice in the surfing community, and HB has the waves to accommodate. Their smaller size allows the rider to perform the progressive maneuvers that are so much more common today, such as hitting the lip, swift carves, airs, and, of course, getting pitted in a barrel. They are the reasoning behind such progress in wave riding skills and have granted surfers the ability to push the limits on what is possible on a wave. Surfing on longboards goes way back to the founding of surfing in ancient Hawaii, where shortboards are relatively newer to surfing. However, both have their place in the surfing community and on the waves.

Despite all the cosmetic changes Huntington Beach has undergone, the waves stay the same. Diehards swear by the break, claiming it’s the ultimate surfer’s wave. You can see for yourself if you wake up early one morning, and if it’s a peaky swell with Santa Ana winds, you’ll side with the diehards.

For more information on surfing in Huntington Beach, visit www.surfcityusa.com.