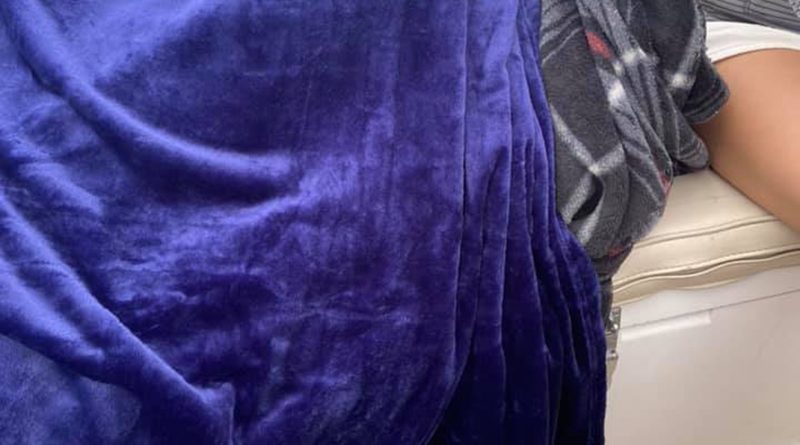 The survivor was pulled onboard and quickly wrapped in blankets and towels after spending more than twelve hours throughout the night and into the morning, floating alone at sea. Image provided by Khosrow Khosravani.

After setting sail on his maiden voyage, Khosrow (Koz) Khosravani found himself in an unlikely situation where instinct took over and tested his newly learned sailing skills.

MARINA DEL REY- On Sept 26, Khosrow (Koz) Khosravani embarked on his first attempt to sail outside the Marina Del Rey harbor with three of his friends on his recent purchase, a 1982 Catalina 25 American trailerable sailboat. While traveling north to Paradise Cove in Malibu, Khosravani spotted a pod of dolphins and followed them west in excitement. However, what he found next was shocking.

“Suddenly, I saw the hand probably 1000 feet away,” said Khosravani. “It could barely wave at us; the person had no power.”

According to the L.A. County Rescue Boat Captain who responded to Khosravani’s “mayday” request, the woman had been floating in the Santa Monica Bay for over 12 hours. She had gone down to the ocean the night before, around midnight, to swim but was engulfed in the riptides and spent the next twelve-plus hours floating out at sea before Khosravani discovered her.

“I went towards what I thought I saw was a human hand,” explained Khosravani. “I wasn’t really sure. Then there was really no movement, but as I got closer, the hand was there again, barely waving.”

Khosravani recently moved to Marina Del Rey from Irvine. Moving to a sailing town nudged him towards buying his sailboat on Aug 20, only one month before this rescue mission. Khosravani took two safely sailing courses at the American Sailing Association on Sept. 14 and got his California boater’s license on Sept 7. Khosravani also purchased two safety flotation devices before setting sail.

Once Khosravani was able to position his boat close to the woman, he and his crew went to work. All four crew members aboard executed their jobs. The first friend constantly pointed at the woman to avoid losing sight of her hand while the waves moved up and down. The second friend was ready to throw the lifesavers to the survivor. The first lifesaver was a throwable flotation device called a STEARNS utility cushion, a floatation device that you can hold onto to stay above water. The second piece of equipment was a rescue throw bag with 70 feet of reflective rope that you throw to the victim and pull them in. Khosravani used both devices on the woman.  The third friend untied the ropes to release the ladder off the back of the boat and into the ocean. Khosravani cut his outboard engine to prevent the blade from cutting the woman. It took both men on board to pull the woman on board, “she had zero muscle function to help us,” said Khosravani.

“We were all in shock. Initially, she [the survivor] couldn’t speak at all. When I tried to pull her onto the boat, she was almost unconscious. I asked her, ‘please just answer one question. Are you alone, or are there other people in the water I should look for?'”

“I am alone,” said the woman according to Khosravani. The guests onboard found every towel and blanket on board to cover the woman while her body relaxed.

Once the woman was successfully brought onto the boat, Khosravani issued an emergency request on VHF channel 16, the international distress frequency. Within eight minutes, the L.A. County Rescue Boat Captain was next to Khosravani and transferring the woman over to the rescue boat; she was then taken to the Ronald Regan UCLA Medical Center in Los Angeles.

“I went through a lot of ups and downs,” said Khosravani. “That day I was so joyful that I saved a life, but for so many nights, I had a hard time sleeping, thinking of what she went through in the darkness, thinking about whatever she was thinking- sharks, or seeing the lights onshore but not knowing how to get to them.”

The survivor’s identity has not been released but she was in stable condition when brought to the Ronald Regan UCLA Medical Center.

Some circumstances helped the survivor in her stressful and dangerous situation, one being the water temperature. According to www.watertemperature.net, the Santa Monica Bay has its warmest water and air temperatures in late August and early September, averaging 68.2°F, giving the survivor the warmest water possible to be stuck in. The survivor was also found floating on her back, which is the correct thing to do. Saltwater has more buoyancy than freshwater, making it easier for the body to stay high in the water and use less energy.

“Most people don’t have respect for the power of the ocean,” said Khosravani. “The ocean is very powerful no matter how good of a swimmer you are.”

Dr. Greg Dusek, a National Ocean Service Senior Scientist, stated the protocol for a person who has been swept out to the ocean by riptides. “Call and Wave for help. You want to float, and you don’t want to swim back to shore against the rip current because it will just tire you out. You want to swim out of the rip, parallel to the shore, along the beach and then follow breaking waves back to shore at an angle.”