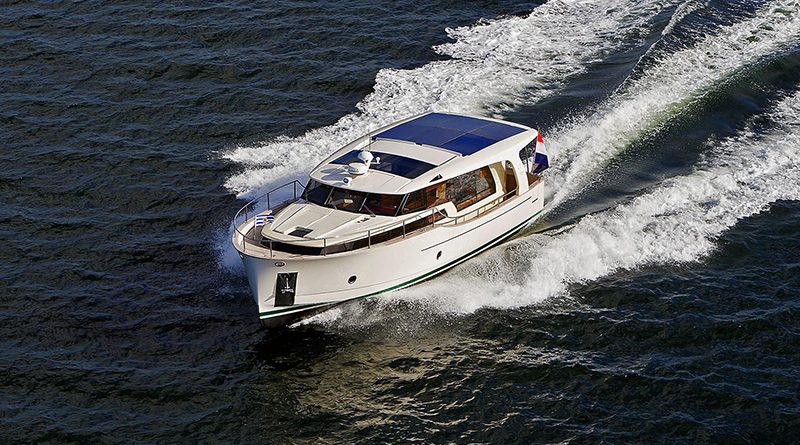 With a bank of solar panels, you can use all of the boat’s appliances are functional, whether cruising or at rest, without having to fire up a generator or connect to shore power. Image courtesy of Bayport Yachts.

As the world adopts a more environmentally friendly intention and people are become more conscious of their carbon footprint, so the industry of superyachts has followed suit.

NEWPORT BEACH— An ecological landmark among yacht builders is on the market and is redefining modern boating. Bayport Yachts in Newport Beach offers the Greenline Hybrid engine, which is curing environmental concerns as it uses up to four times less fossil fuel than a planning powerboat in similar conditions.

Greenline Yachts launched its technology in 2008 after years of accumulating experience in hybrid drivetrains.

“We’re not looking for a boat that takes 400 gallons round trip to Catalina anymore,” said J.R. Means, President and International broker for Bayport Yachts. “I was down at the Miami Boat Show and ran across Greenline, and I’m like, ‘Woah. Hold on a second here. This is cool. This is a boat where I can do 90 percent of my boating for free from solar and battery power to electric boaters. Really, how long have you guys been around? [asked Means] Where did you come from? Whose concept was this? Do you have enough money to stay in business?’ I’m an engineer by education, so I asked them.”

Greenline Hybrid Yacht’s roofs are dressed in solar panels. The solar roof array keeps the lithium batteries fully charged and provides additional energy for the boat’s electric drive system. As a result, no-cost and emission-free navigation are possible at low speed where the amount of energy harvested from the sun and the system’s energy consumption are equal, making the Greenline Yachts a solar vessel.

What Bayport is doing is taking the customer’s engine of choice and adds in the hybrid propulsion to the middle of the engine and the transmission. Hybrid propulsion is any vehicle propulsion system that includes two or more propulsion sources in one design. They can be used together or alternately.

“So, let’s say we’re dealing with a Volvo,” said Means. “So, you buy the Volvo 220 horsepower diesel that comes with a transmission from Volvo, we unbolt the transmission, we drop in our piece which is a clutch and an electric motor, bolt on the transmission, put it in the boat, and then you select whichever one. So, if you want to go fast, you’re not limited.”

The boat features no generator. According to Means, a generator is unnecessary on a Greenline Hybrid because the solar panels power the electricity.

“The solar recharges the LiPo battery packs, which will then turn the electric motors, in whatever model [of yacht] you’re in, and then if you want to, you flick a switch, and you’ve got the Volvo or Yanmar diesel, or Cummins diesel, in front of that so you can go full power. [Go] full speed to Catalina, get into the moorings over there, switch back to electric power, and move into your mooring. Spend the entire week or weekend on the boat. If it’s sunny, you can stay there indefinitely. It’s literally the best bug-out boat you could ever imagine.” said Means.

The hybrid system features four modes of operation with a simple and easy-to-use control system. The user interface is as simple as pushing a button to switch between diesel and electric navigation modes. In addition, the Greenline Hybrid can collect, store, and use electrical energy from the sun, the shore connection, or the engine.

While the boat is in electric mode, it is designed to navigate in and out of marinas or anchorage with no noise, smoke, or little wake. If the vessel is traveling at four knots on a fully charged battery pack, the boat has roughly 20 miles of range. In addition, the diesel engine propels the boat and drives the alternator, which also recharges the battery pack.

“A lot of these new electric boats, unless they’re the new ones on the foils, but anything that’s in the water, there is no range because no one has come up with a battery that’s going to give you any serious range,” said means.

Although diesel is involved, the Greenline Hybrid Yacht is an admirable system to enter the world of electric boating. According to Means, the current all-electric boats on the market are limited to about 40-60 miles at true cruising speed.

“The batteries have to catch up for us in boating in order to have a viable system,” said Means. “Whereas in hybrid system, you buzz from the jetty opening to Avalon, you shut the diesel back off you back on to the full solar-powered electric engine and you don’t use any further fuel for the rest of your trip until you want to leave Avalon and come back to Newport or Long Beach, wherever you’re going.”

Currently, in the United States, Greenline Hybrid Yachts are sold in five states, Florida, Illinois, California, Maryland, and Washington. Bayport Yachts is the only broker in California that sells the model.

“Here in the U.S., there’s only about six of us Greenline dealers all over the U.S. and Canada,” said Means. “It’s really a niche boat with some specialized training. The guy that walks in and he knows what the battery capacity is before you do. He knows how much solar is being generated on a sunny day. So, it’s a fun sale, but it’s also very technical because the buyer is very well educated.”

J.R.’s father, Jack Means, his wife, and some partners opened Bayport Yachts in January of 1987. J.R. joined the team in December of 1988 after graduating from Cal Poly San Luis Obispo with a degree in engineering. Bayport Yachts began as a California Yacht dealer selling brand new boats, moved on to Navigator Yachts, then became the largest boat dealer in the world for Carver Yachts. Bayport Yacht’s last transition was Chaparral before bringing on Greenline Hybrid Yachts as buyer’s and seller’s interests become increasingly more environmentally conscious.

For more information on the Greenline Hybrid Yachts, contact Bayport Yachts at (949)- 631-0228 or visit https://www.bayportyachts.com/.

For more information on the Greenline Hybrid Yachts and how they operate in varying weather conditions, visit https://www.greenlinehybridusa.com/extreme-comfort/.

One thought on “Yachting Is Greener on the Other Side”